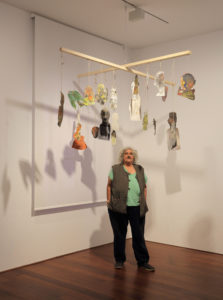 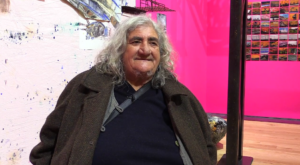 Born in Egypt to an Armenian family, Anna Boghiguian studied economics and political science in 1969 at the American University in Cairo, while simultaneously taking painting classes with the Egyptian artist Fouad Kamel (1919-1973). When her family emigrated to Montréal, she went on to study at Concordia University, from which she received a Bachelor of Fine Arts in visual arts and music. It was during this time that she lost her hearing. Since then, the ear has been a recurring motif in her work, appearing in turns in its metaphysical, organic, social, and sensory aspects, such as in the installation Guilt Machine (2013) or in the painting Mapping the Ear (2011-2014). A nomadic artist, A. Boghiguian constantly moves between continents, saturating piles of notebooks with drawings. Her obsession with city noises and the murmurs of the world has led her to develop a hybrid, poetic body of work that combines paintings, drawings, collages, sculptures, installations, and narratives to compose a mental, emotional, and physical map of the world. Her journeys are a major inspiration in her practice, which stands midway between a travel journal and a private diary. Her entire production is steeped in literature and filled with words borrowed from personal stories or plays, papers, and mythological or historical tales. “There is a story in them, in that my thought process comes from the narrative form”, says the artist, whose body of work is like a book fragmented in space. This affinity with literature has led her to illustrate many written works, among them poems by Constantin Cavafy, Giuseppe Ungaretti, and Naguib Mahfouz, who won the 1988 Nobel Prize for Literature.

In 2003, the American University in Cairo Press published Anna’s Egypt, a notebook of texts, drawings, and paintings in which she shares her memories and experience of Egypt. At the heart of her practice, travel leads to a profound and sensible reflection on the way wars, revolutions, conquests, and migrations influence the trajectories of men and raw materials (salt, cotton, wax), as illustrated in her work Woven Winds/The Making of an Economy – Costly Commodities (2016). Made out of paper puppets evocative of the slaves who worked in cotton plantations, this installation was shown in 2018 at the New Museum in New York on the occasion of The Loom of History, her first solo exhibition in the United States. “It is wonderful to not have had exhibitions and to have kept my work to myself before finally exhibiting it at the age of 70”, the artist revealed on the occasion of her 2016 monographic exhibition Promenade dans l’inconscient at Carré d’art in Nîmes. After forty years of formal exploration and experimentation on the margins of the art scene, A. Boghiguian has enjoyed meteoric success since 2010. Her profuse and expressionistic work, which weaves together mythologies and history, as well as current topics and personal issues, was prominently featured at several major art events: documenta 13 in 2012, and the Istanbul, Sharjah, and Venice Biennales in 2015, where she represented Armenia. A. Boghiguian’s art will also be shown at Tate St Ives in February 2019. 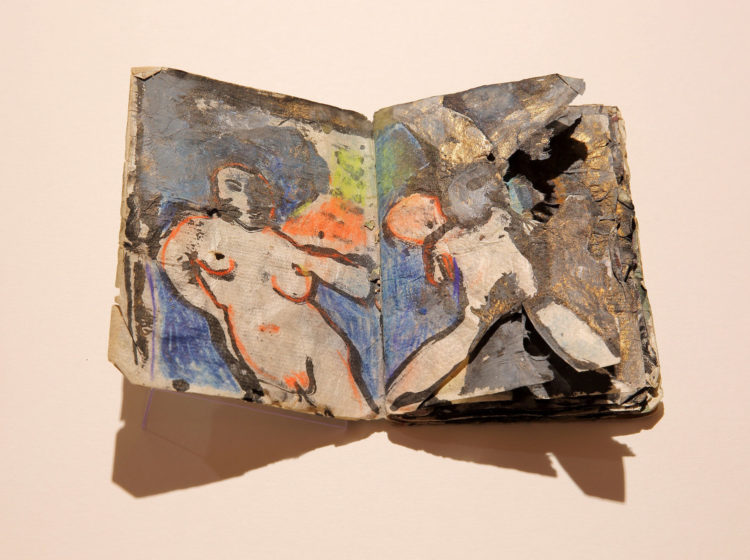 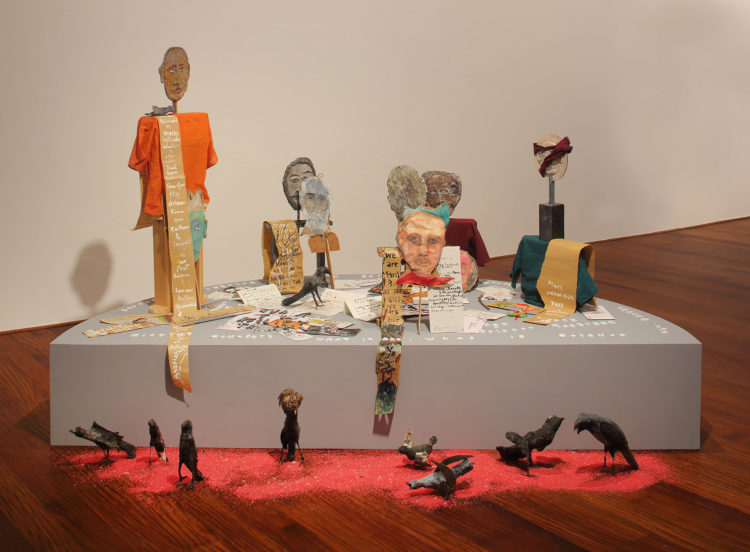 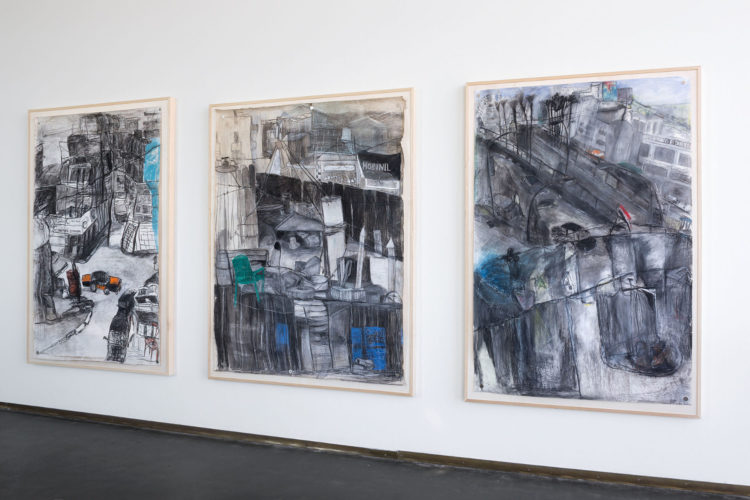 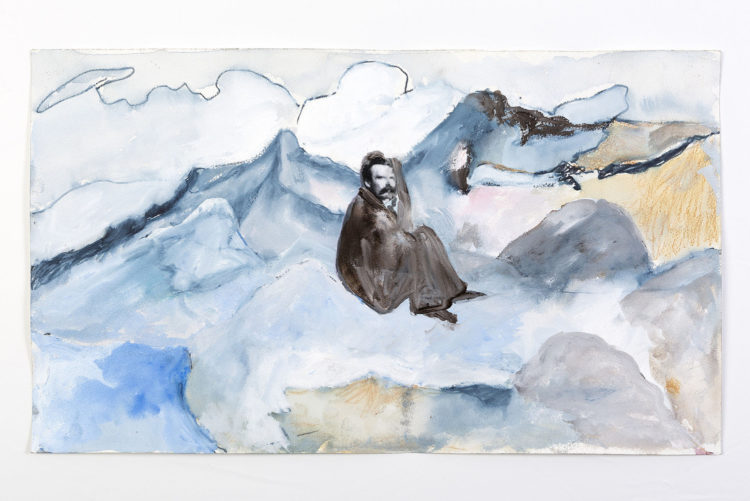 Anna Boghiguian, An Incident in the Life of a Philosopher, 2017, collage, watercolor, and pencil on paper, © Anna Boghiguian and Castello di Rivoli Museo d’Arte Contemporanea 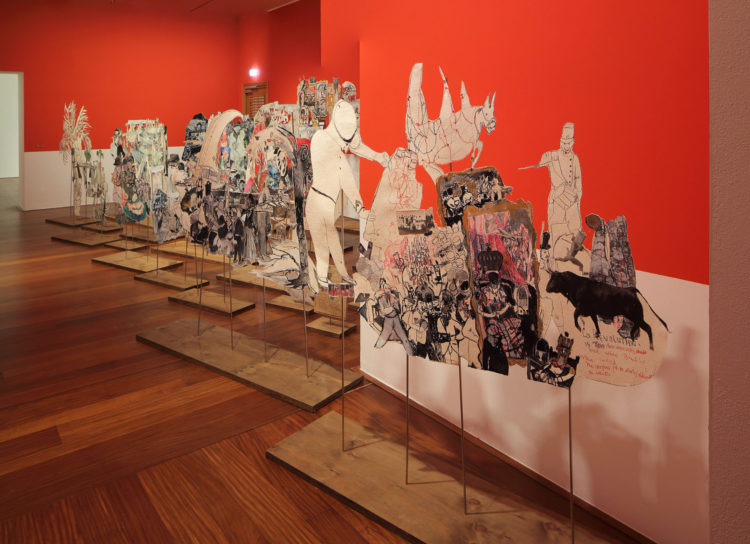 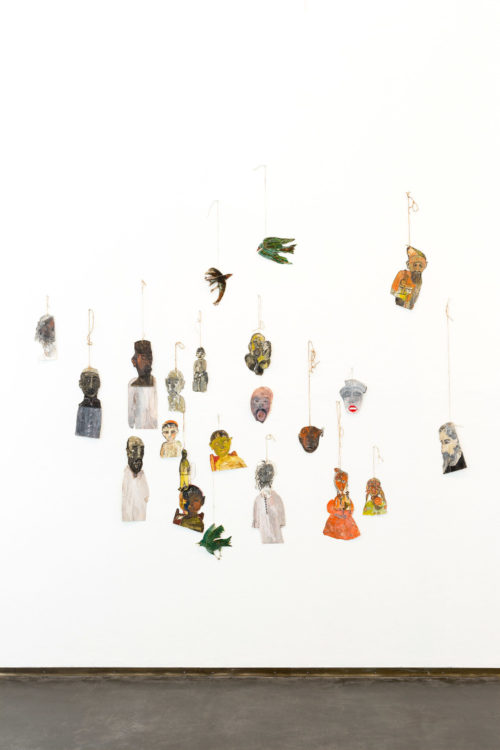