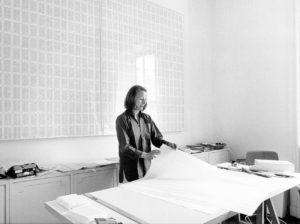 Originally from northern Germany, Irma Blank moved to Sicily in 1955. This uprooting was fundamental for this great reader who is passionate for writing. She realised that “the correct word does not exist”, as even in her own language words couldn’t fully express the accuracy of a thought. In 1968 she began the series Eigenschriften (Writing for the self). In her pastel-coloured drawings on paper, she repeated signs, a meaningless written language, that she explored until 1973. That year marks the date of her settling in Milan which led to a radical change in her work and life. She came into contact with the very active scene of concrete poetry and began to exhibit in art spaces and bookshops. The cycle Trascrizioni, born in 1973 (and continued until 1979), are transcriptions of black ink on transparent paper of the printed material that the artist had on hand: newspapers, philosophical treatises, poetry, and so on. She would place her paper on the original whose layout she reproduced with repeated and regular hatching, while reading it with her mouth closed, emitting a monotonous sound. As a high school art teacher, she devoted herself to her own work in the silence of the night and thus became aware of the sound produced by the drawings being made. She decided to record herself at work, systematically for all her series. From then on she saw her practice as a total sensory cycle, which in addition to sight and hearing, includes touch – with the one-off books (with drawings to be manipulated) she has been making since the 1960s – as well as bodily presence – with actions and readings performed since 1979. She took part in Documenta 6 in Kassel in 1977 and in the Venice Biennale in 1978.

I. Blank then began the series Radical Writings (1983-1996) that took on the form of a linear writing based on the duration of her breath. In oil, acrylic or watercolour on canvas or paper, these works bear witness to a path towards colour. The first were made in pink and purple, colours of experimentation. The artist then exclusively explored blue, which represents infinity, writing and determination. Between 1984 and 1993, she spent part of the year in Düsseldorf, where she had a studio. Aware that society was entering an era of communication, after her definitive return to Milan she experimented with tdigital tools in the Hyper-Text series (1998-2002) where superimposed words, extracted in three languages from her writings were silk-screened on canvas. At the same time, and in contrast to the coldness of the computer, she worked on the Avant-testo series (1998-2006), for which she drew on canvas or polyester holding Bic pens in each of her hands in an unprecedented circular movement, a pure explosion of energy.

I. Blank began the protean Global Writings series in 2000 with works executed both by hand and computer. She invented an eponymous alphabet, composed of eight consonants with which she writes texts and books creating an unintelligible but universal language, pronounceable by anyone.

A victim of a serious health problem in 2016, I. Blank now re-appropriates her body and adopts a new way of working with her left hand. The series Gehen-Second Life (since 2017) led her to her second life as a woman and artist with lines drawn on sheets or in notebooks, revealing her ability to face physical adversity in order to move forward.

Highly regarded in Italy, I. Blank has finally received growing international attention in recent years. Her work was shown at the Venice Biennale exhibition Viva Arte Viva in 2017. From 2019 to 2022 the retrospective Blank dedicated to her work will unfold across seven different exhibitions. Her works are present in the collections of the Musée National d’Art Moderne – Centre Georges Pompidou in Paris, the Kunstmuseum in Düsseldorf, the Museion in Bolzano, the Getty Center for the History of Arts and the Humanities in Malibu, the Galleria Civica d’Arte Moderna e Contemporanea (GAM) in Turin, the Archivio della Poesia del Novecento in Mantova, as well as Harvard University in Cambridge. 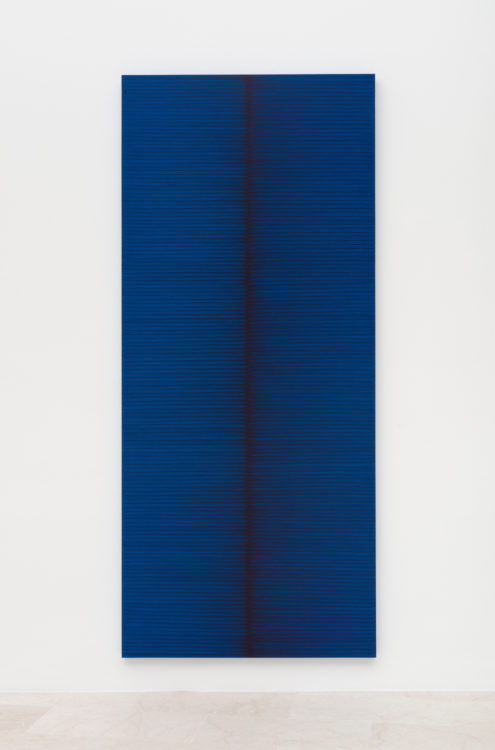 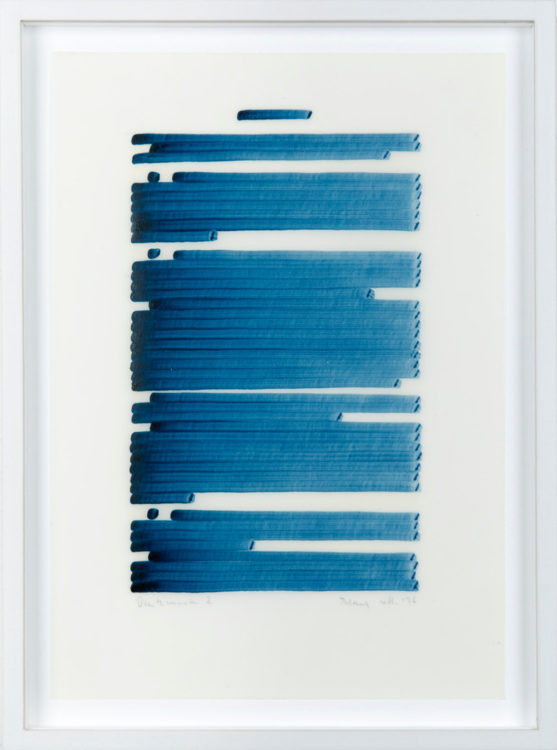 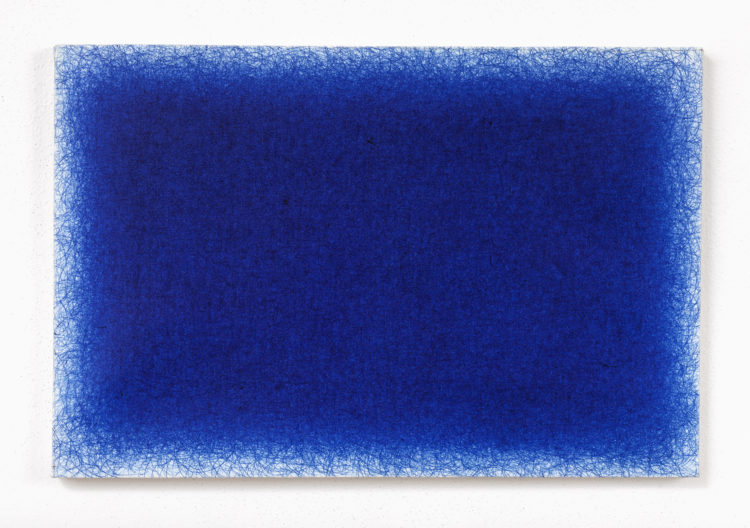 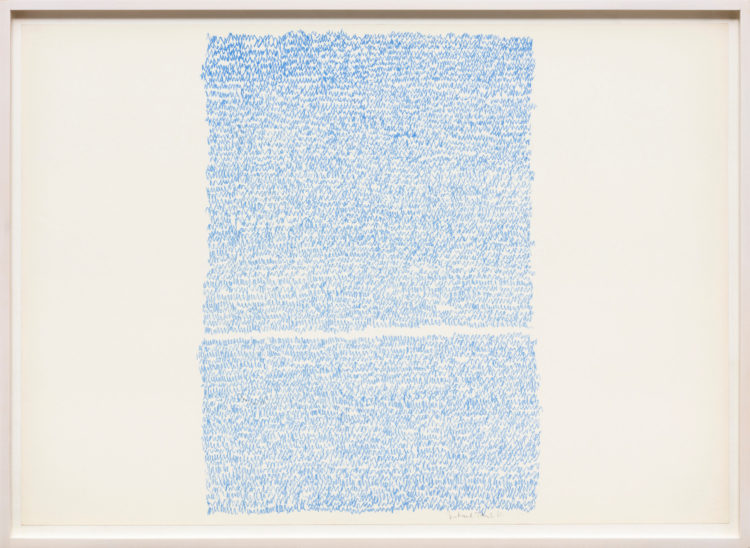 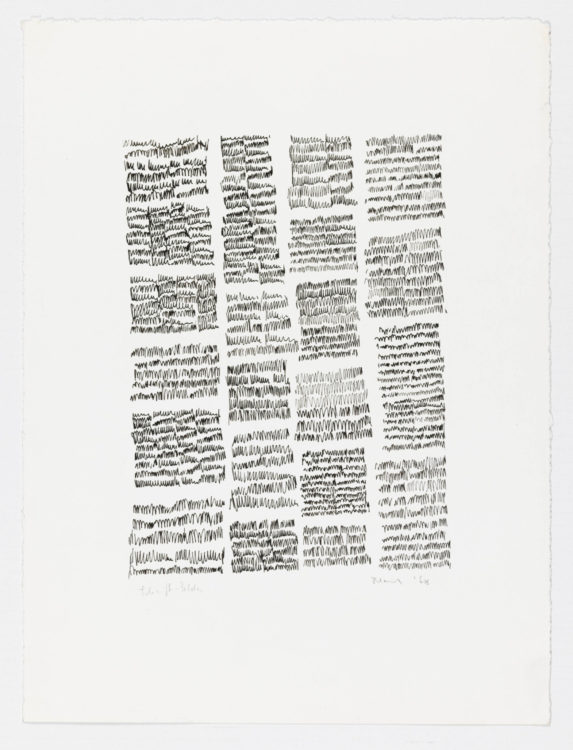 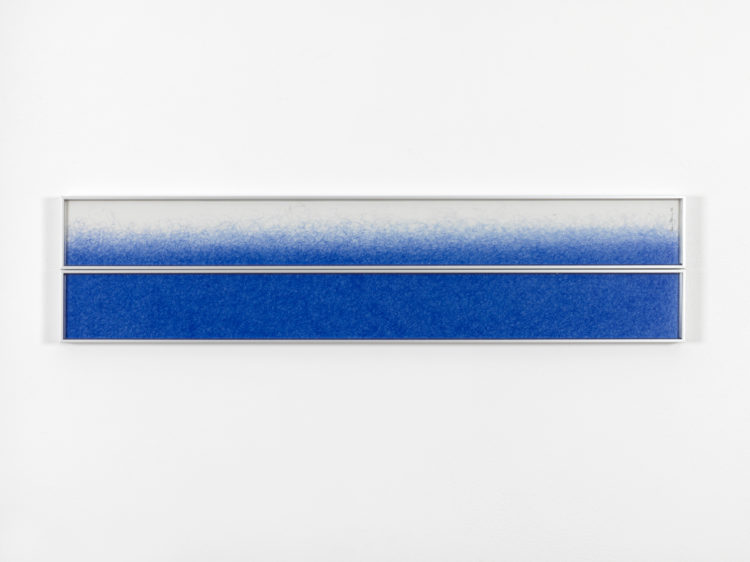 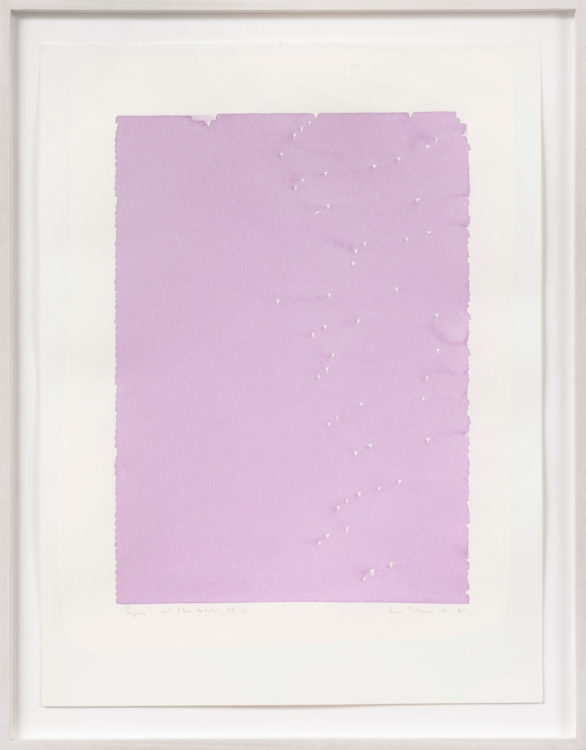 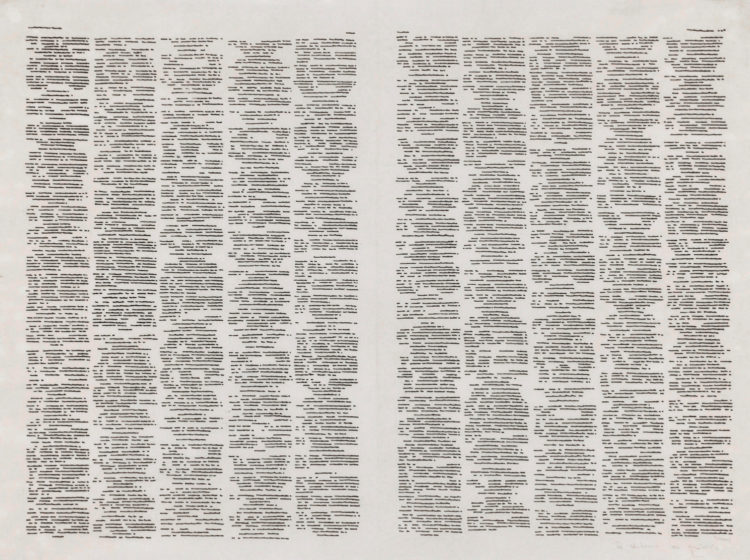 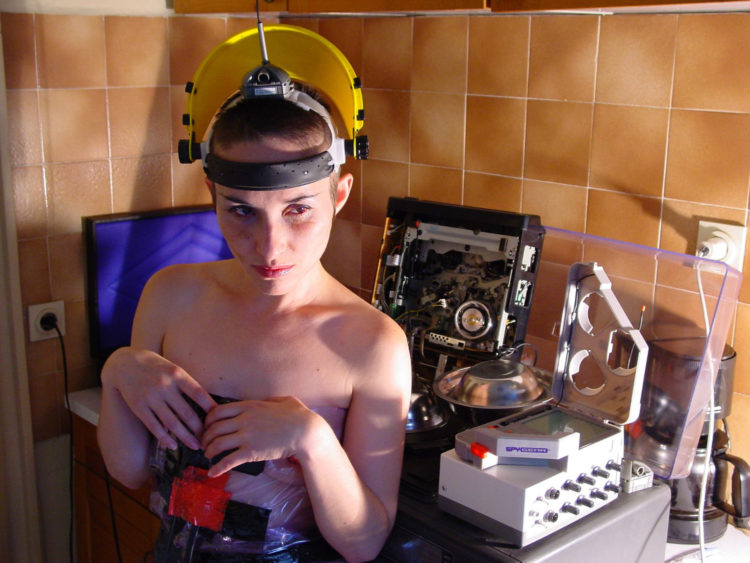