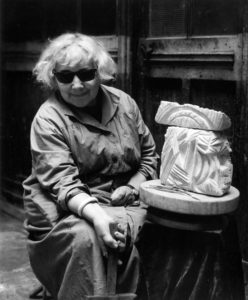 Born into a well-to-do family, Jeanne Kloss studied in Cologne. After having completed three years of service with the Dantzig Red Cross (1909–1912) at her father’s wishes, she studied singing and piano in Berlin, where she met her husband, professor Heinrich Kosnick, and began a career as a singer. In 1923, she discovered the work of the Bauhaus. In 1925, she moved with her husband to Saint-Jean-Cap-Ferrat, where she experimented with painting and collage. She created fantastic landscapes and characters similar to those in art brut. She received glowing reviews when the couple settled in Paris. It is undoubtedly at this moment that the artist took on a French name. In 1927, the gallery Billiet presented her first solo exhibition, followed by others in Berlin and in Dantzig. Shortly after her separation from H. Kosnick in 1929, she became Otto Freundlich’s collaborator and partner. She developed abstract compositions notably from textiles that she would assemble and embroider. In 1933, she began sculpting, and presented two relief sculptures the following year at the exhibition of the Abstraction-Creation group. Along with O. Freundlich, she adhered to the Association of Revolutionary Writers and Artists (AEAR), similar to the Communist party. In 1937, the couple introduced Gaston Chaissac to painting and drawing, and founded a small academy, Le Mur (The Wall), that encouraged young artists to use artisanal techniques such as stained-glass, mosaic and embroidery. Peggy Guggenheim invited the painter to participate in an exhibition in her London gallery in 1938.

The following year, a large composition was exhibited at the first Salon des Réalités Nouvelles. When the war broke out, O. Freundlich, a German citizen, was interned in various concentration camps, then released, taking refuge with J. Kosnick-Kloss in the Pyrénées-Orientales. In hiding from 1943, they continued to produce, J.Kosnick-Kloss painting and embroidering. When finally denounced, O. Freundlich was deported to Lublin-Maïdanek, where he died. The works of the two artists were fortunately saved thanks to actions of Picasso. All the while working on her own creations, J. Kosnick-Kloss was responsible for publicising O. Freundlich’s work. In 1948, she obtained French nationality and, once her divorce with H. Kosnick was finalised, she had the right to bear the name of Freundlich attached to her own. 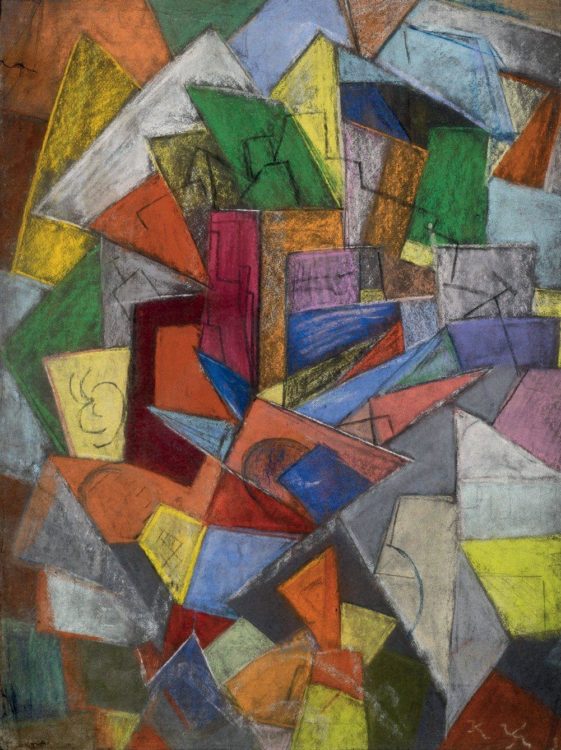 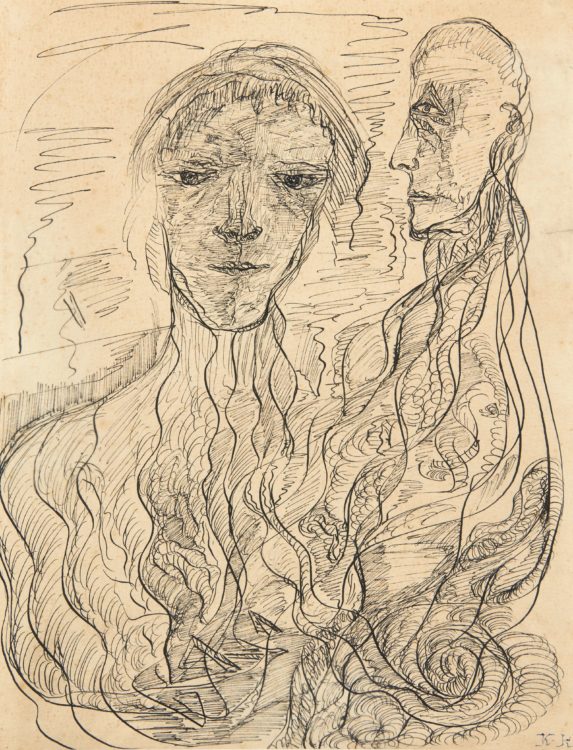 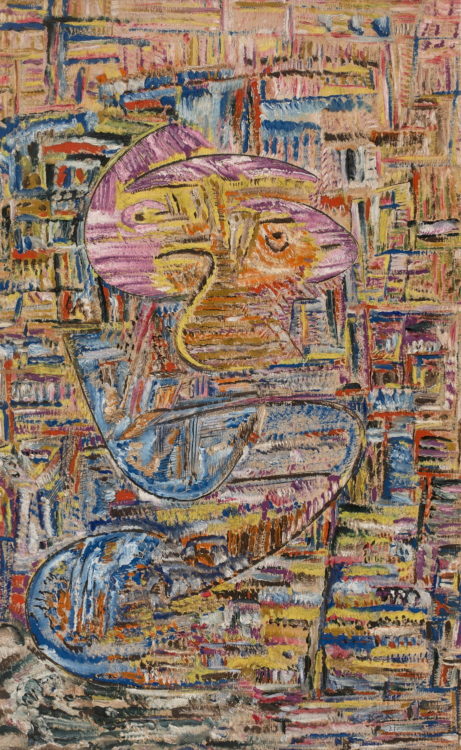 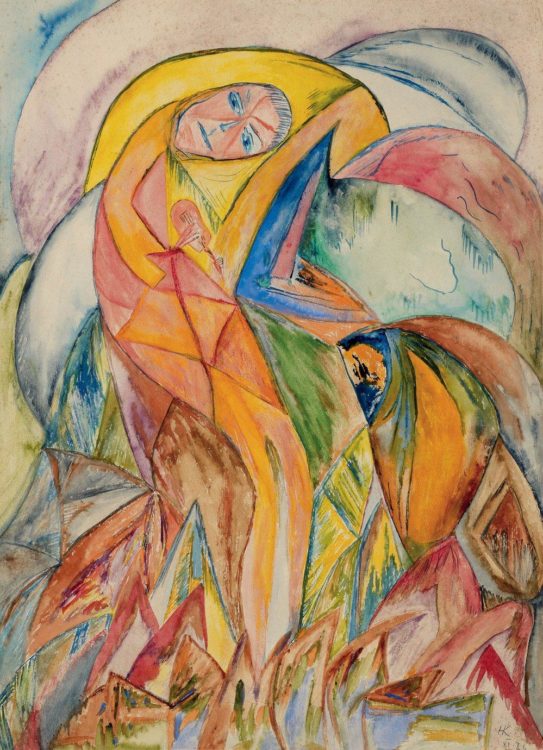 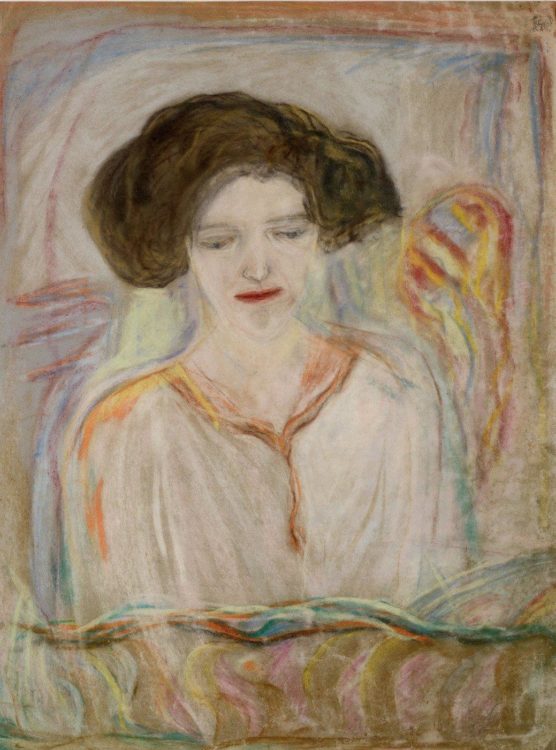 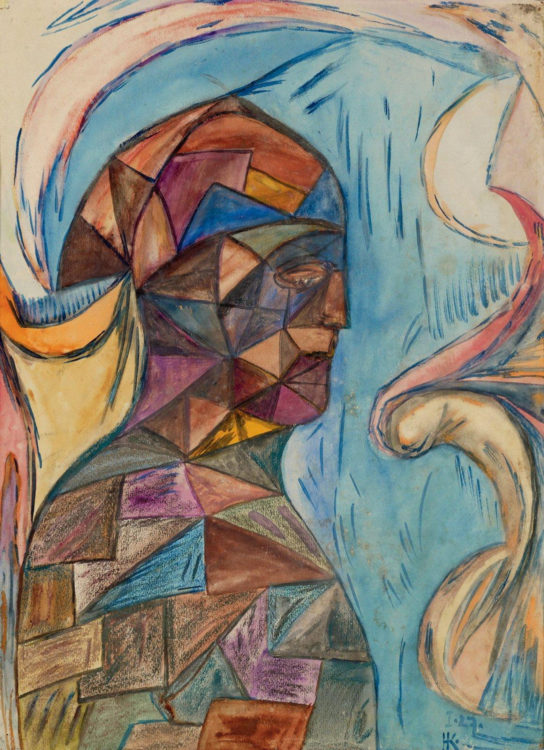