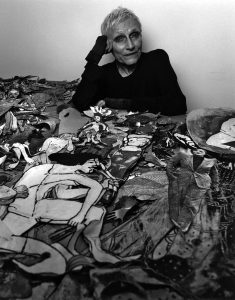 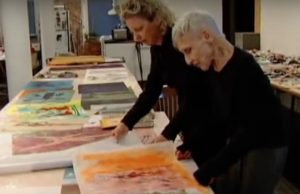 Known for being a passionate activist and feminist, Nancy Spero is above all a great artist. In 1949, she graduated from the Art Institute of Chicago, a stronghold of resolutely figurative painting, after which she studied for a year at the School of Fine Arts in Paris at the atelier of André Lhote. After returning to the United States, she married the painter Leon Golub, with whom she would have three children. At the time, she worked on a single canvas, which she erased and started over and over again, unable to complete it. Her painting up to the mid-60s was dominated by the human figure and remained very dark. Standing figures and embracing couples constituted the major part of her formal vocabulary for over ten years. In 1959, the family moved to Paris. Her Black Paintings became Paris Black Paintings and were shown at the Galerie Breteau. She moved back to New York in 1964, where, horrified by the Vietnam War, she channelled her rage in a new series of works. She gave up oil on canvas, which she deemed too closely related to the masculine world, and replaced them with thin, cheap paper and gouache. From 1966 to 1970, she made about 150 pieces: in War Series, she transcended the burning issue of the atrocities committed by the US army in Vietnam, and in doing so became part of an epic tradition, linking her to Antiquity and its war stories, to the medieval world of illumination, and, more recently, Goya and Otto Dix.

In 1969, Spero became interested in the work of Antonin Artaud, whom she identified with. In him, she saw her own rage, violence, and frustration. The result was a series of sixty or so works on paper, the Artaud Paintings, in which she quoted the artist’s words and added elements of collage. These were followed by the Codex Artaud, a series of 34 vertical or horizontal pieces made out of scrolls of paper glued end-to-end – a technique that would become typical of her style. That same year, she joined the activist group Women Art Revolution (WAR) then, the next year, the Ad Hoc Women Artists’ Committee. She was also a founding member of the A.I.R. (Artists in Residence) Gallery, the first cooperative gallery for women, which opened in New York in 1972. Typography was a major element in her work during the 70s. She made stamps of each letter in the alphabet and printed them in red and black, as seen in her work Search & Destroy, completed in 1974. The same year, she chose to view the world exclusively through the representation of women. She continued to associate text and images in frequently monumental pieces, such as the 14 panels of Torture of Women, shown in 1976 – the year of its creation – at the A.I.R. Gallery. After this, she created a new alphabet made up of pictures of women of all periods and cultures, which she had transferred onto metal in order to use it as a set of stamps. Her use of text gradually disappeared in favour of pictures during the 80s. Colours became bolder and her eminently pictorial work on backgrounds enabled her to reacquaint herself with the painting she had given up in 1966, as can be seen in Black and the Red III (1994). Despite her arthritis, Spero’s creations became increasingly ambitious: Azur, completed in 2002, 85 metres long and made up of 39 panels, is the culmination of fifty years of work. With this major piece, the artist positions herself in the artistic continuation of Egyptian papyrus scrolls, the friezes of the Parthenon and the Bayeux tapestry. She remained very attentive to milestone events such as the 9/11 tragedy. She evoked the falling bodies of the Twin Towers in small formats, with an unusual choice of colours. Golub died in 2004, after which Spero started working on her last on her last monumental installation, Cri du Coeur, which runs along the foot of the walls. In 2007, she created Maypole/Take No Prisoners for the Venice Biennale. She died at the age of 83, while a retrospective of her work at the Centre Pompidou was in preparation. 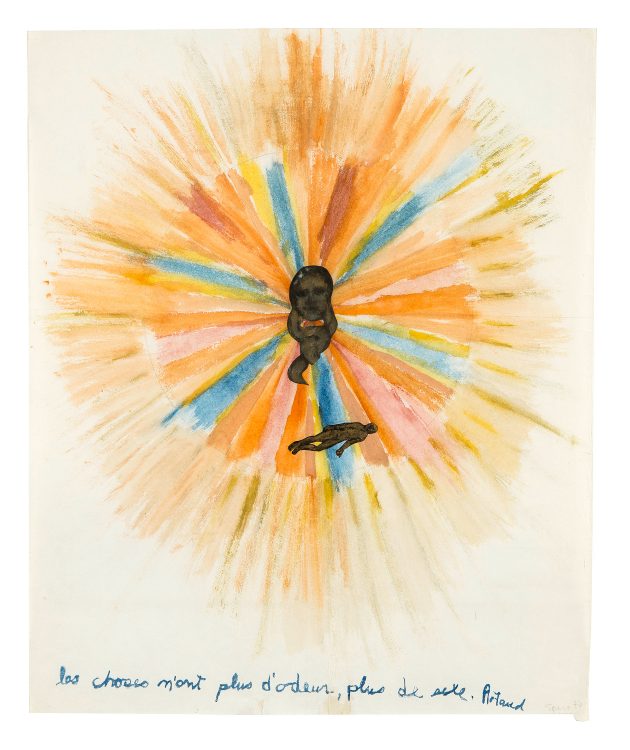 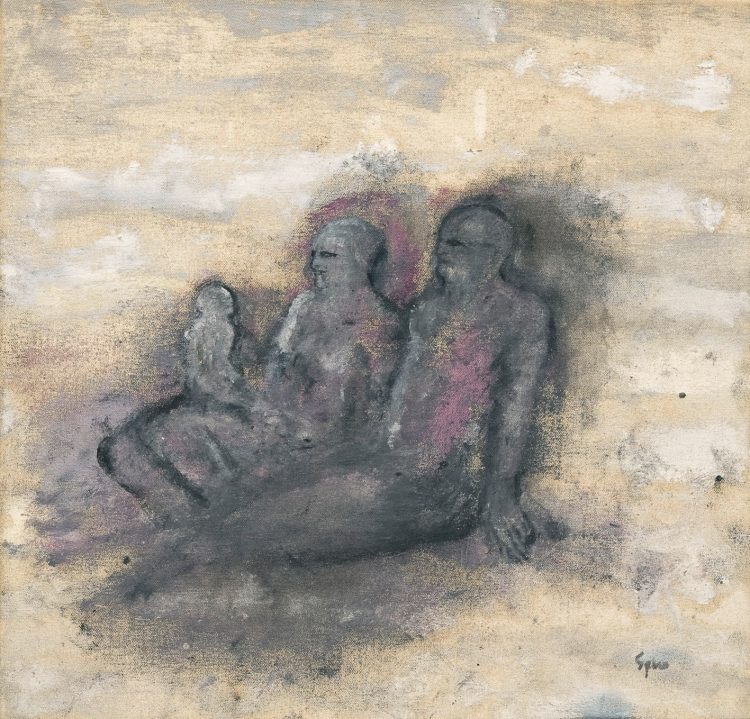 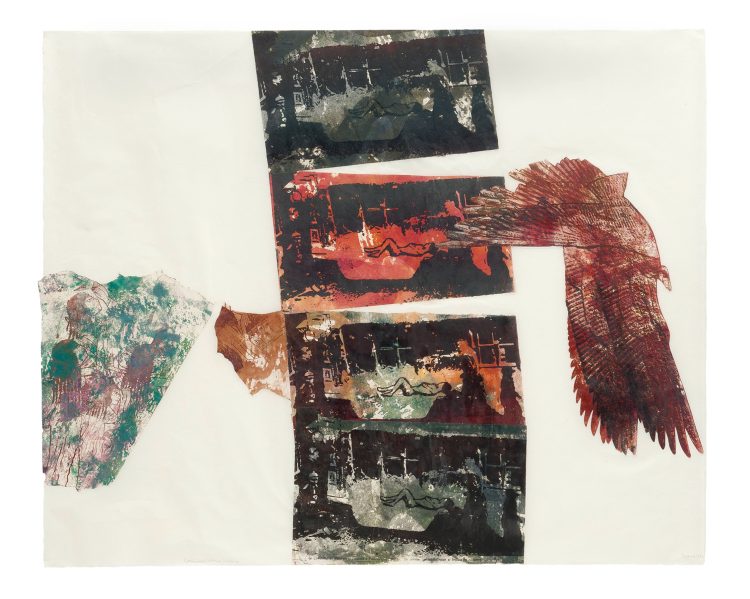 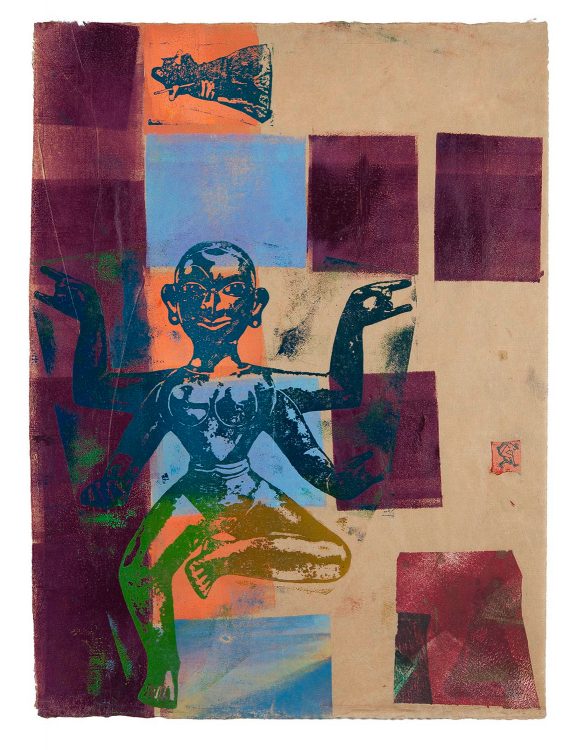 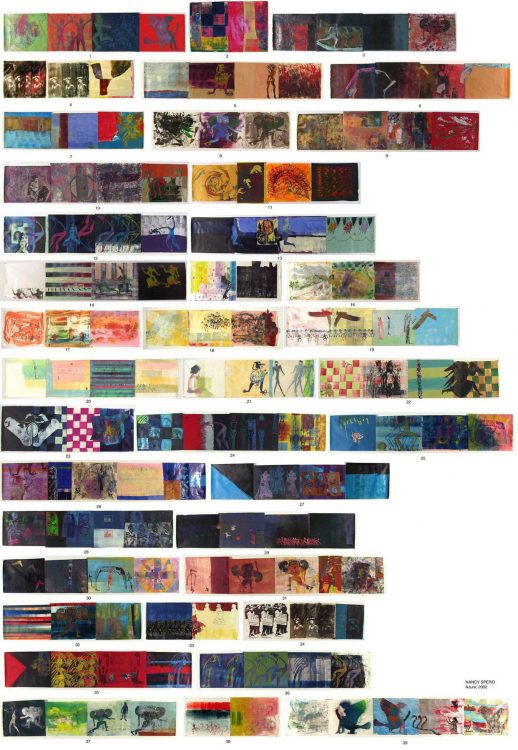 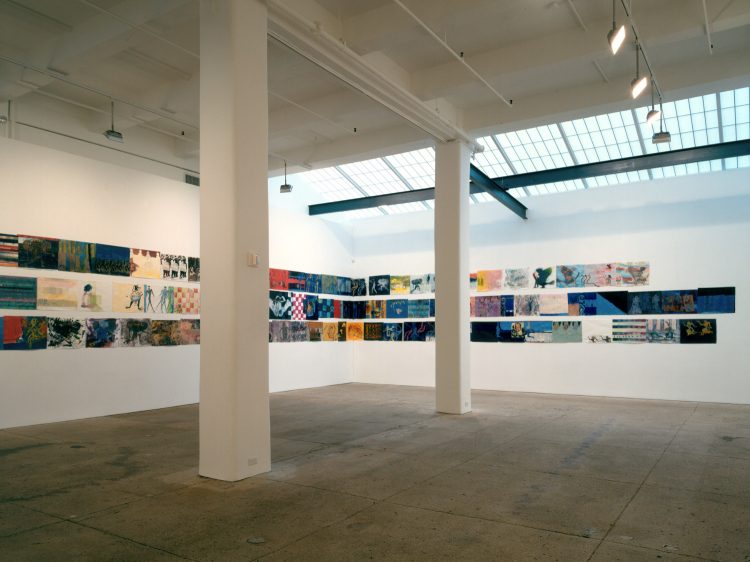 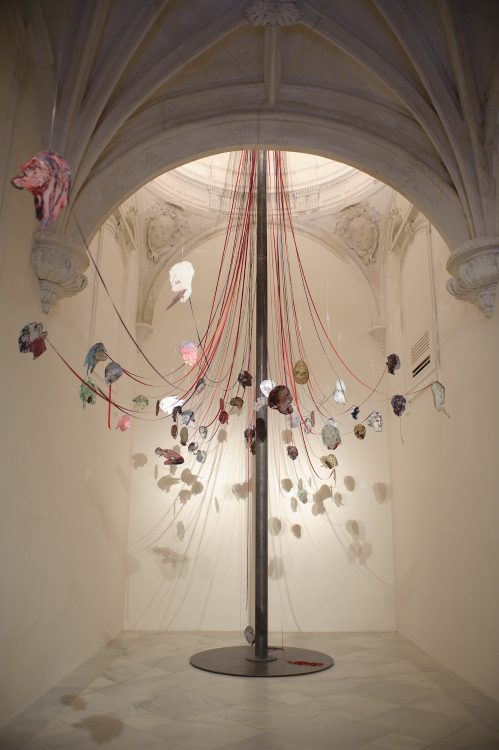