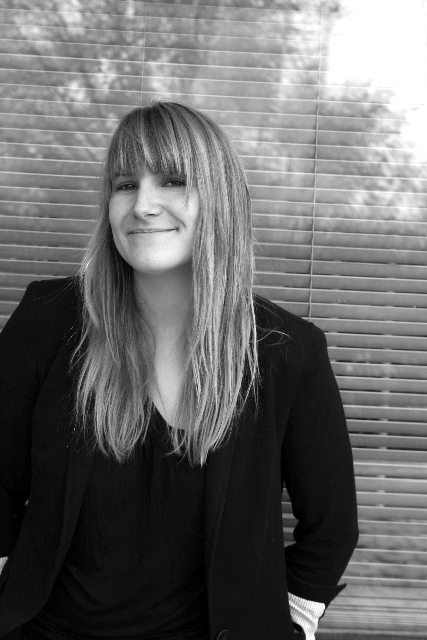 “Talking about places is the same as talking about what is human” explains Eva Nielsen. For a number of years, this French-Danish artist has blurred the points of reference in the landscape and painting. Since 2010 she has depicted places that are both familiar and strange, such as deserted suburbs or an abandoned farm. Architectural features of concrete, awnings, urban furniture, woven together by silkscreening, structure the territory of nature and the canvas. In spite of the architecture being characterised by modernity, these places do not seem to belong to any fixed space-time juncture. Eva Nielsen gives a possible form to anonymous spaces, “non-places”, whose great frequency today as inevitable areas of passage in a globalised landscape Marc Augé pointed out in his “anthropology of supermodernity”. Not seeming to be in any particular place, devoid of human presence, the landscapes painted by this artist might be this immediate frame by which we are surrounded, though we no longer see it. With the aim of representing a modern utopia that has been abandoned, her paintings echo like a future in the past, a return of tomorrow on today.

This “supermodernity” is also that of painting today. Eva Nielsen explores the boundaries between photography and painting, between painting and mechanical printing, an area that she knows has been a focus throughout art history since Andy Warhol and Gerhard Richter. The starting point for her paintings is a photograph that she takes during explorations on foot of the landscape, both in Europe and America. To bring out the contrast between the black and white of the photographic print and the dull yet luminous tonality derived from the Scandinavian landscape, Eva Nielsen treats each work in two stages, the first being the silkscreen, the second that of the watercolours, inks and acrylics. She turns silkscreening into a unique operation, running counter to its capacity for reproduction. All that she retains is the aesthetic effect created by the mechanical weave, just as she sometimes used to experiment with a printer for her preparatory drawings.

Today the long time required by painting becomes questionable in an age of instantaneity and ubiquitous imagery. Is seeing everything the same as seeing nothing? Eva Nielsen has recently added the mania for “seeing” to her architectural landscapes. Her most recent series, Lucite (2015–), takes its name from an allergy to light. The horizon of her paintings is ostensibly veiled. Viewers take on a dual status: we are not simply a voyeur of the painting but also of the house that is glimpsed through the gauze-like material that covers the surface of the canvas. The folds of this netting can be likened to a motif central to the history of art as theorised by Gilles Deleuze: that of the pleat, a quintessential Baroque theme that here has become a fold in some cheap gauze.