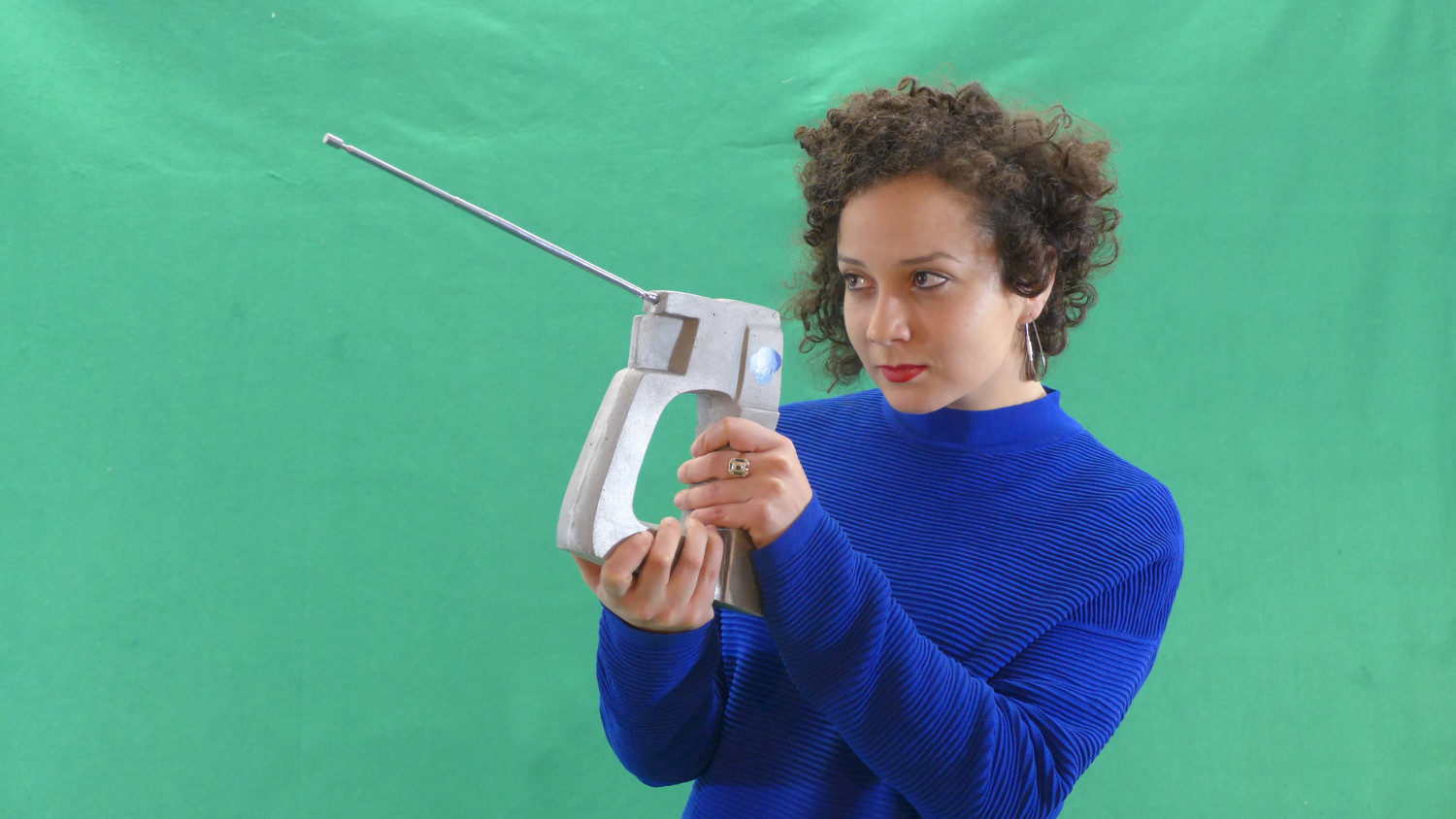 Ghita Skali employs rumour and transaction as methods and primary material for her “social sculptures” (Joseph Beuys). However, she doesn’t only spread these rumours: she inserts herself into them and amplifies them – not their volume (+), but their value (x), qualitatively. 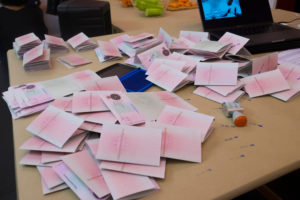 By rendering unimportant the question of whether the facts are true or not, she chooses to focus on the political and social charge of what we might call “banal utopias” (utopia in the sense of a judicial and spatial non-place – οὐ-τόπος) or “banana dystopias”, of which here are a few examples:

– an Eiffel Tower appears temporarily in Fez, Morocco;
– passports are invalidated by border police at Casablanca airport after they stamp them with the date 32 October 2018;
– donkey tails from a Rita McBride sculpture disappear in Mönchengladbach, Germany;
– a spy duck is captured and detained by the Egyptian police;
– Morocco faces an invasion of artificial palm tree spies;
– an Egyptian military chief announces the invention of a machine that can detect and cure diabetes, hepatitis C and HIV/AIDS. 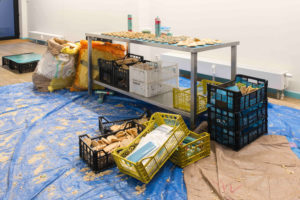 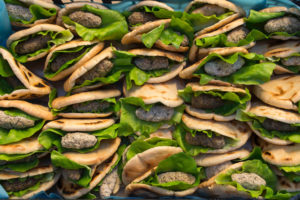 The list goes on. This last anecdote was the starting point for the series Narrative Machines (2018+), a project in several parts, each of which take the form of installations that are also used as backdrops for Ghita Skali’s performance pieces. These Narrative Machines push the military chief’s lie to the limit by materialising these supposedly miraculous machines called CCDs (Complete Cure Devices) – one is shaped as a sort of stapler and the other as a parking metre. Ghita Skali also echoes the ingenious (and funny) reaction of the Egyptian people – who are not fooled – by inventing her own “AIDS kebabs” (which began to be sold as such after the military chief used a kebab as a metaphor to explain how the miracle cure worked).1

Not only do these gestures have the power to focus our attention on the role of fiction in politics, but they also lead us to consider other ways in which invention and the strength of irony can be used by those who are not described as “artists” (an important point to make, in that Ghita Skali does not hierarchise the establishment and amateurism: she has been known to indiscriminately draw from both Zoe Leonard’s displays and anonymous Facebook photo albums).

The mention of Beuys’s concept in the opening sentence of this text is deliberate. One of Ghita Skali’s favourite exercises is Powerpoint presentations. If you Google “blackboard beuys powerpoint performance”, the first result is a question: “Would Joseph Beuys have used Powerpoint?”2 Perhaps the intuition was well-founded (?).

However, while the artist is interested in the formats of performance-reading and Powerpoint for their didactic aspects (which she manipulates at will, in that her lessons are not meant to tell the Truth with a capital T), she has also chosen these formats in response to her excessive nomadism (sometimes deliberate, at other times forced), as well as for its ease of use and questionable aesthetics (according to good taste).

Therefore, Ghita Skali’s praxis must be identified not as a production process (resulting in a “product”), but rather as a circulation process, which often sabotages itself to set off what Kodwo Eshun calls “the deprogramming of fascist patterns of regressive progress”.3  This is to say that the artist’s actualised fables, as well as the paths taken to confuse the issue, are often designed to destabilise the modes and parameters of classic knowledge, which, once absorbed without criticality, are reduced to the status of indubitable opinions (which we should all be wary of).

In spite of this, Ghita Skali does not place herself in a posture of direct confrontation. By giving her works the pleasant (and comfortable) veneer of relational aesthetics aesthetics, she pretends to “welcome” her public. After all, this is what is expected of her. However, while she is well aware of the way she is perceived (because of her name, her age, and her country of origin – three crucial markers that are bound to fuel the economy of culture’s desire for youth and exoticism) and of the role she is expected to play in the contemporary art system (“represent, Ghita, represent!”), she chooses to hijack these.

In this sense, her approach is reminiscent of that of William Pope.L, who proclaimed himself “The Friendliest Black Artist in America” in order to make it easier for him to deconstruct American mythologies. Food is prepared and passed around, but must not be eaten. Passports pile up, but the public is advised not to hoard them. And there are smells of rotting meat. So, despite what we think we are seeing, Ghita Skali is clearly not inviting us to sit at her table!

Ghita Skali (b. 1992, Casablanca, Morocco) is currently an artist in residence at De Ateliers (Amsterdam, Netherlands), after studying at Villa Arson (Nice, France) and the Beaux-Arts in Lyon (France). Her projects draw from anecdotes found in the media and later obscured, revealing relationships of power based on mythologies and demonstrating both systems of belief and authority as well as irony. The aim of her works is less to find truth in rumour than it is to map out the possible ramifications and contradictions that generate it. Ghita Skali’s work was recently shown at Été 78 (Brussels, Belgium), Project Space Festival (Berlin, Germany), Beirut Art Fair (Lebanon), Triangle (Marseille, France), 18 (Marrakesh, Morocco), and the Fondazione Sandretto Re Rebaudengo (Turin, Italy).

1
“I take AIDS from the patient, and feed the patient on AIDS, I give it to him as a kebab skewer to feed on”, quoted by Berman Lazar, “AIDS cured! (says Egypt’s military)”, The Times of Israel, 26 February 2014, https://www.timesofisrael.com/aids-cured-says-egypts-military.
2
This is the title of a performance by Daniel Ladnar.
3
Remarks taken from the question and answer session with the Otolith Group (Anjalika Sagar and Kodwo Eshun), following the screening of the film O Horizon (2018) at Nottingham Contemporary (Nottingham, 19 November 2019).

Commissioner: Cédric Fauq is a French curator living in Nottingham (UK). Since September 2017, he has worked as a curator for Nottingham Contemporary, where he develops exhibition projects (Still I Rise: Feminisms, Gender, Resistance; Sung Tieu: In Cold Print; Grace Before Jones: Camera, Disco, Studio) and performances (Okwui Okpokwasili; Steffani Jemison; Lou Lou Sainsbury), and contributes to publications. In addition to this, he also writes (particularly for Mousse magazine), curates shows independently [DOC, Paris (2018); Sophie Tappeiner, Vienna (2018); Nir Altman, Munich (2019); Cordova, Barcelona (2020); Litost, Prague (2020)]. He co-directed the clearview.ltd Gallery in London from 2016 to 2018 and was a member of the curatorial team for the Baltic Triennial XIII (2017-2018).