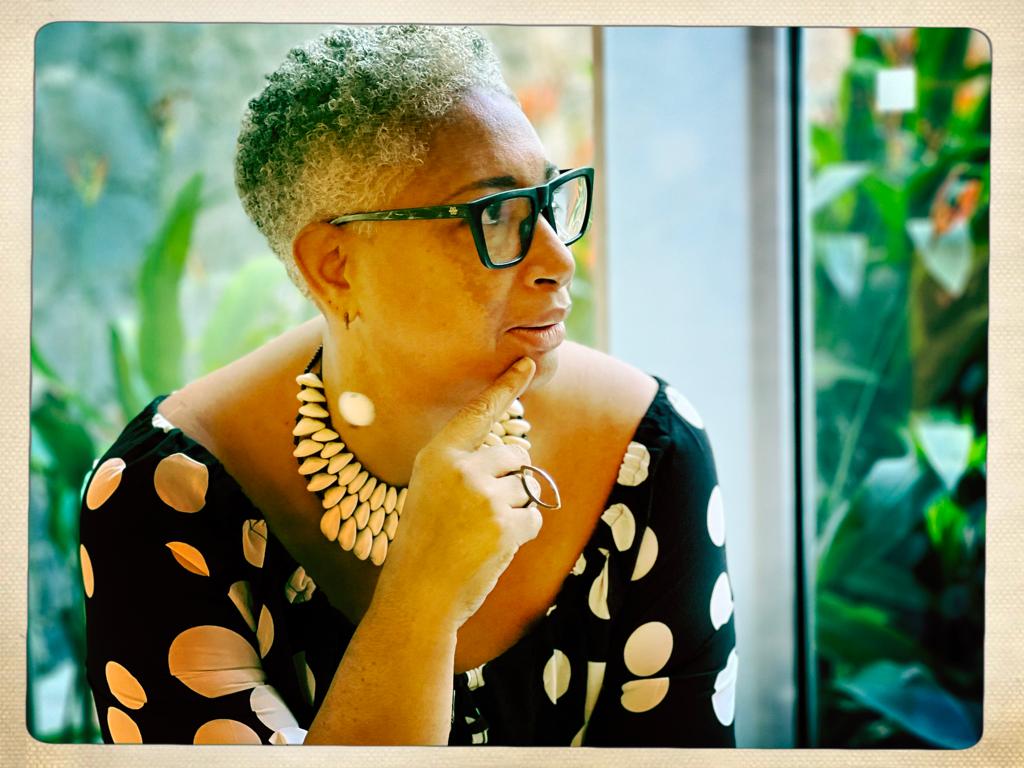 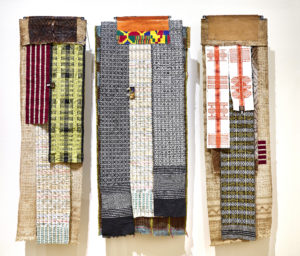 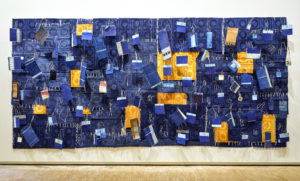 “I will try to untie myself from all of this ‘white’, very European culture. I will enrich myself with myths, with symbols, with rites, with rituals. There is suffering. Every journey, all dis-location is a painful act.” Echoes of the voice of Valérie John.

One had to, then, (like a whole generation had done) leave for Africa (first dreamed of) and observe in Senegal, through the bogolan pagne, the mythologies:

“In the Dogon language, ‘cloth’ is soy, which means both ‘that’s the word’ and ‘seven’, the rank of he who speaks whilst weaving. For the Dogons, loom is not a ‘tool’ of production but a link which embodies the circle of life, death, and resurrection. Weaving is not an act of creation but is creation and procreation. The weaver pushing his shuttle sings and thus brings his voice into the warp, where it binds with the voices of the ancestors, and the sound of the loom is called ‘the creak of speech’. The weaver is found at the centre.” Echoes of the voice of Valérie John. 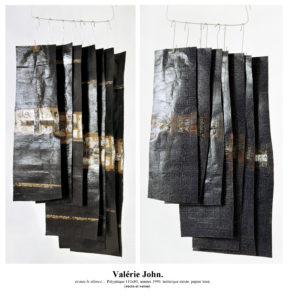 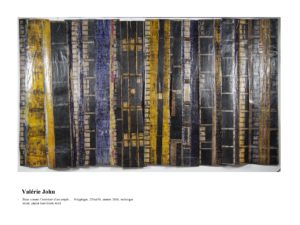 It is in 1998, in Martinique (after the initiatory journey to Africa) that Valérie John’s artistic practice begins, in her “workshop-artwork” with her loom – or, more precisely, her “co-mingling weaving tool” – that is where the work unfolds. At night in her workshop the artist rediscovers, invents unknown gestures, like those which she was able to observe at Grand’Rivière, where the fishermen plunge deep into the indigo waters (memories of her journey across sub-Saharan Africa, of the indigo which she found in the practice of the Sarakolés dyers).

The work (or should one call it the kò like the poet Monchoachi does?) is made up of pagnes, of papers woven and then assembled; that which she calls a “body-palimpsest”. The papers are then covered in “black molasses” made of indigo, of gold leaf and of arabica gum, in order to better combine and conserve the whole, which evolves throughout time. Valérie John then traces her own signature as a sign of a beyond-memory (which is also the title of an eponymous work made between 1998 and 2021). 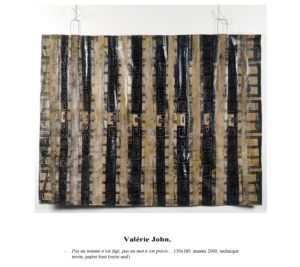 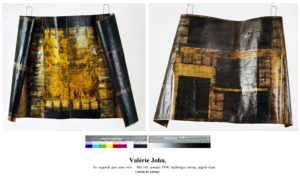 Weaving in this part of the world is not only a practice; it is an archaeology and a recovery of bodies. Weaving, in this case, probably means becoming conscious of this mixed body, of this plastic texture made of many materials and memories which is the creole kò. It also means healing and bind-rebind this texture, this too-long torn weft which is the body of a Black and Martinican woman, which is the West Indian mud and waters. Weaving, as a resistance, a plasticity, a medicine; as the practice which responds best to the uncreation of these geographies. Weaving also as a way of telling/recounting the world and of going to the world:

“The world exists in the outskirts. It vibrates. But how do we find the path to it?”

In the end, the work is anchored in a West Indian and Guianese history of art (itself taken from a more global history of art of the “Black Atlantic”), it is about learning rather than swallowing whole…

Valérie John (Vigon) was born in Fort-de-France (Martinique) in 1964. It was in Paris that she explored, from 1981 to 1983, the scenographic arts, the plastic arts, semiology and the pagne (as a research subject). She then travelled, between 1983 and 1987, to Africa, from Senegal to Mali to Mauritania. She participated for a time in the Laboratoire Agit’art (Dakar, 1974). Holder of the CAPES, she returned to Martinique in 1987 and began her body of work in 1998. Director of the visual arts department of the Campus Caraïbéen des Arts (Fort-de-France) from 2011 to 2015, she was made a knight of the Order of Arts and Letters that same year 2015. She has exhibited in Africa, the United States, Canada and the Caribbean.

Chris Cyrille is a poet, an art critic and a curator. After training in art theory and philosophy at Paris 8, he decided to write for several magazines and became interested in new practices in art criticism and exhibition curating. He was in charge of research at the Centre Pompidou and worked on the African and Caribbean art scenes. Member of AICA (Association internationale des Critiques d’Art), winner of the Prix Dauphine for contemporary art in 2017, of the Young Curator prize at the 69th edition of Jeune Création, and of the AICA France prize in 2020, he curated the exhibition -But the world is a mangrovity in 2021 (Jeune Création, Paris). He is currently working with the Persona Curada platform (created by curator Noelia Portelia) and the Ateliers Médicis as resident artist. Continuing his research around Caribbean thoughts and artists, he is preparing, with others, - in a prophetic night composed of crabs and centipedes - reversals in the shadows of the King's court… 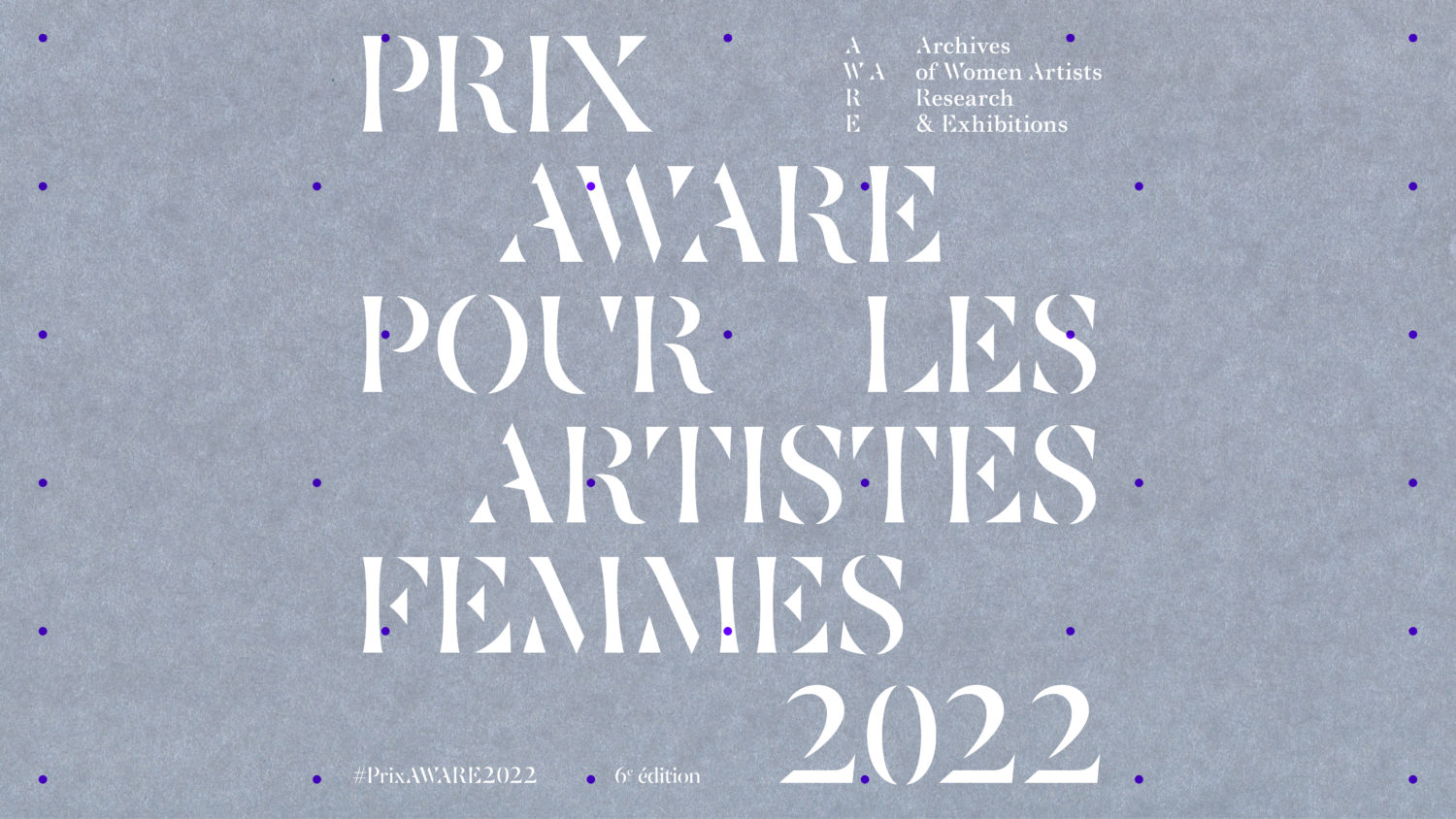