Blythe Bohnen and the Concept of the Body in Movement: From Plan to line 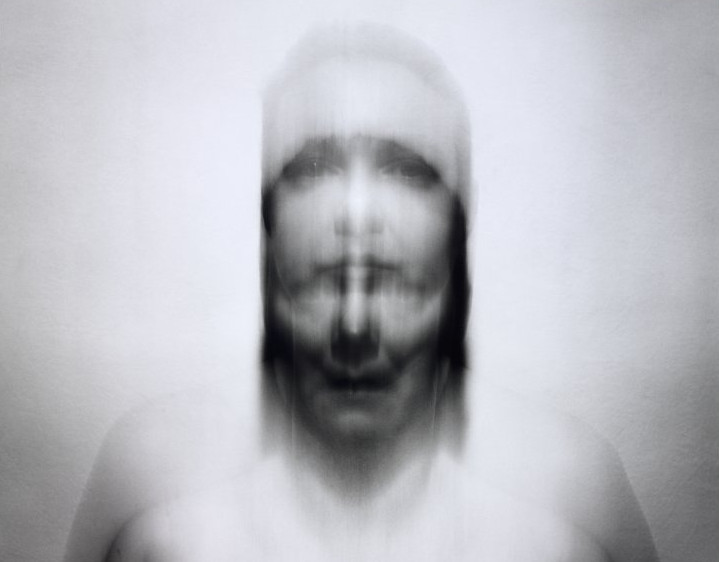 Blythe Bohnen is an American artist born in 1940 in Evanston, Illinois. A graduate of Smith College and the University of Boston, she arrived in New York in 1972 to study at Hunter College. She integrated particularly well into the New York arts scene and took an active part in the creation of the cooperative gallery A.I.R.

She started with a practice of painting and drawing that progressively evolved towards photography in the late 1970s. Although extremely diverse, her work, and her career, never received the recognition she wanted, to such an extent that her name has never broken out of the closed circles of American conceptual art. B. Bohnen, whose work remains little known in France, is particularly striking in her incredible mastery of photography and in the ways she combines it with the graphic arts. 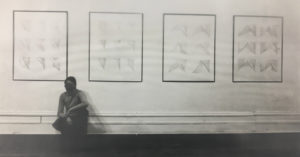 Blythe Bohnen in front of her drawings exhibited at A.I.R., © Rights reserved

Her series of Self-Portraits, studied in detail within the framework of this research, was begun in 1974 and continued until 1984. In these works, B. Bohnen embarks on a search for a new form, one that is in motion and playful with the light and the lens, no longer shying away from disturbing distortions. With overexposure, anamorphosis, deliberately poor composition, and blurring, B. Bohnen subverts the art of photography. While her commitment to feminism remains quite discreet, it nevertheless shows through in prints that emphasise a renewed and highly personal view of the female figure. Her unique definition of feminism is expressed in each of her images through her frenzied desire to be recognised for these images, and not for her gender. She sees herself reflecting in the “floating self”1 on the surface of the glazed paper. B. Bohnen’s production reveals her ability to diversify the protocols of the photographic medium, while assimilating the standard techniques and methods of her era.

In addition to engaging implicitly with feminism, B. Bohnen’s work establishes as its subject a clear conceptual element: we are made to ask ourselves how the artist was able to integrate the avant-garde and feminist scenes of her time, how she was able to go from a physical or material plane to one in which a movement is frozen in a single moment through a chemical reaction – the effect of light on photosensitive paper. This change of method begs the question: was photography an end in itself, an outcome, or was it simply another way of causing her creations to evolve, of overturning the codes of conceptual art at that time? B. Bohnen unsettles us all the more in that she passes from an abstract and pure approach to drawing towards a more tangible reality in her self-portraits. Her work, while little-known, merits a re-examination: she is an artist who transcends the question of artistic and sexual genres/genders, thus highlighting a kind “of hybridism [and] crossbreeding of practices”2 characteristic of the seventies. B. Bohnen destroyed the boundaries of traditional art history and stepped into the breach, taking her explorations to splendid depths.

Master 2 research thesis in art history applied to the collections, directed by Michel Poivert and Dominique de Font-Réaulx and defended by Jeanne Mathas, in September 2017, at the École du Louvre.

How to cite this article:
Jeanne Mathas, "Blythe Bohnen and the Concept of the Body in Movement: From Plan to line." In Archives of Women Artists, Research and Exhibitions magazine, . URL : https://awarewomenartists.com/en/magazine/blythe-bohnen-concept-corps-mouvement-trace-a-trace/. Accessed 20 May 2022