Joëlle Tuerlinckx Takes on Vassivière Island, or The Heuristic Point of View 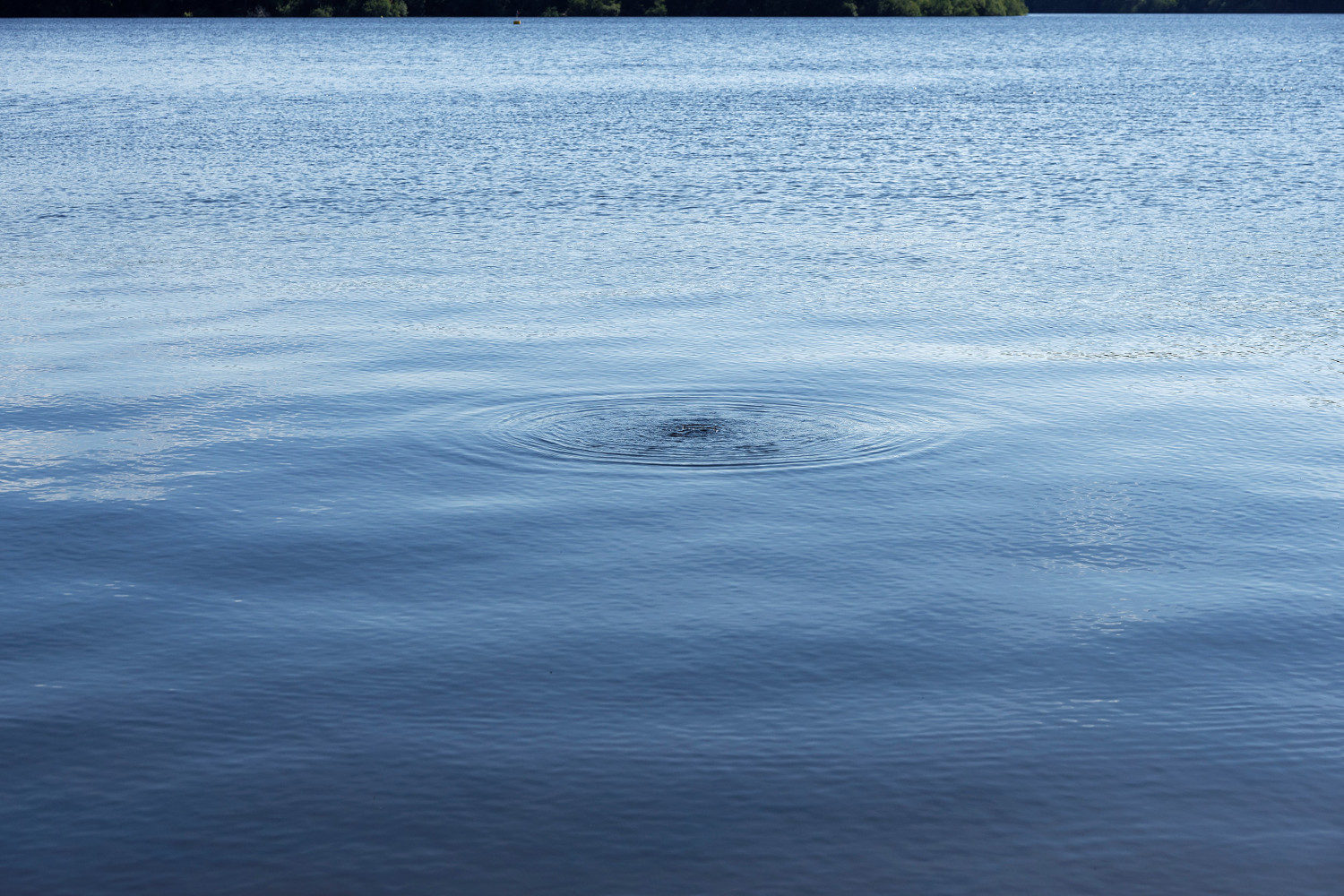 “Maybe” or “may be”: this ambivalence of language between the adverbial and the verb phrase, from which the title of the new solo project-exhibition in France1 by Joëlle Tuerlinckx (born in 1958) derives – La Constellation du peut-être [The Constellation of Maybe] – comes as much from Ariadne’s thread as from the verbose sense of possibility.2 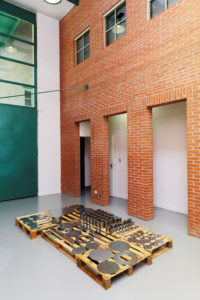 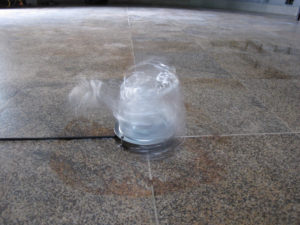 On the invitation of the Centre international d’art et du paysage de l’île de Vassivière, the Brussels-based artist, who, ever since her first solo show in the early nineties at the Witte de With Centre for Contemporary Art in Rotterdam (Pas d’histoire, pas d’histoire, 1994), has pioneered the exhibition-object – striving to present it and to deconstruct, study, reappropriate, and reverse its rules of organisation, the circulation of its visitors, its codified, reified language, its closed and open spaces, its imposed durations, in short the whole apparatus of institutional communication and constraints – responds here through an ideal work, at once total and dispersed, a display for the senses, and through an economical and minimalist architecture of sculptural interventions. She has responded to this invitation with a concept that includes artworks with multiple variables, with uncertain balances, plausible centres (centre of gravity, point zero, art centre) and materials with different densities. This possible transformation of an outdoor space, at once narrative, performative, and choreographic, encompasses, punctuates, measures, weighs up, and moors together the entire landscape of Vassivière Island and its original geological, lacustrine, agrarian, industrial, architectural, and artistic history. It stretches from the meadows to the artificial lake, from the sandy banks to the undergrowth and clearings, from the sculptural woodland, heir of “land art”, to the hydroelectric dam built in 1947, which gave rise to this place – which is as ambiguous as it is unsettling – resting between nature and artifice, real and fake. Within this moment of possibility produced by J. Tuerlinckx, the two emblematic, imposing buildings designed by architects Xavier Fabre and Aldo Rossi, which form the outer structure of the art centre, are only two elements, among many others, from this landscape-theatre of artefacts. Open to the exterior or welcoming the exterior within their classical, museum-style interiors, they represent a sculpture-architecture – as does the whole island, perhaps – turning themselves inside out “like a glove”,3 or like one point among the eleven points, sculptural crosses and discs that the artist has devised, located, placed, related, and named on the surfaces of the landscape. In sum, these form a “constellation” whose arrangement derives not so much from chance or a cosmic refraction as from an illusion, from a human choice awaiting a visitor – something ephemeral, available, transitory within a subjective time all their own – the sudden protagonists of a glance, of a shape barely glimpsed, of a place expanding or dilating the visible field, just as it does its potential absence, its potential disappearance, its temporary eclipse. 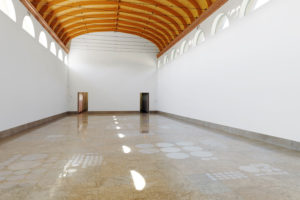 Tuerlinckx turns Vassivière Island into a hypothesis (of work, space and time, contemplation, and position) and a laboratory of experiences and perceptions. The signs and indications of this are Aldo ou Le Point zéro, a fluro yellow spot repainted every morning at the entrance to the art centre; Modernité, the concrete layer buried in the grass of a field; NOR ou Neither: L’aire du fer, a disc made of polished Inox reflecting the atmospheric variations; and ‘WORLDHOLE’ ou Projet pour ‘Trou-de-monde’, a circular form made of sandstone, barely detectable at the ground level of a pasture; or Jet-de-Lac ou Rêve de fontaine, which rejects the water of the lake in a random manner; Pulsator-landscape, a motorised metal and rubber object turning extremely fast and emitting blinding visual energy, or ‘Maincy’ (Maincy de jour/Maincy de nuit) ou Sculpture minimale, a pop-up work surreptitiously accommodating the lake’s surface; or La masse ou ‘Edda’ I, II, an eye-catching polished bronze ingot in a field overlooking the water’s edge…

In his essay The Possible and the Real, published in November 1930, the philosopher Henri Bergson, speaking about “the continual creation of unpredictable novelty that seems to go on in the universe”, energetically affirms that “we ultimately find it obvious that the artist creates possibility at the same time as reality when he carries out his work”. The whole method of J. Tuerlinckx in this exhibition – as in all of her previous projects – falls within this Bergsonian affirmation. She redeploys architectures, redraws the lines of thought whose protocol is enacted through the presence, the steps, and the visual action of the visitor. And each sculptural decision on the artist’s part becomes the multifaceted origin of a singular and shared gaze, this heuristic point of view where everyone can find, discover, and adjust her or his own distance when confronting the world, her or his rightful place that is at once the personal story of an encounter with the work and the landscape, and a personal freedom within reality.

1
As a reminder of the artwork-project by Joëlle Tuerlinckx at Cransac-les-Thermes in the Aveyron: “La Triangulaire de Cransac ‘MUSÉE DE LA MÉMOIRE-PROPRIÉTÉ UNIVERSELLE®’”, inaugurated in 2011.
2
Based on the essay by art historian Mayeur Catherine, “Joëlle Tuerlinckx or the Sense of Possibility”, in Wor(l)(d)(k) in Progress?, exh. cat., Wiels, Bruxelles, 22 September 2012 – 6 January 2013, Haus der Kunst, Munich, 9 June – 29 September 2013, Arnolfini, Bristol, 7 December 2013 – 9 February 2014 (Cologne: Verlag der Buchhandlung Walter König, 2013), 165-211. The French translation of this text features in the publication pending from the Centre international d’art et du paysage de l’île de Vassivière.
3
When discussing the “musée de la mémoire” within the framework of the work designed for Cransac-les-Thermes, J. Tuerlinckx explained “that it can only be opened, turned over on itself like a glove”.  Text by Joëlle Tuerlinckx published in the form of an “Extrait de l’interview entre l’auteur de ‘La Triangulaire’ et l’artiste”, in the press kit of “La Triangulaire de Cransac – ‘MUSÉE DE LA MÉMOIRE–propriété universelle®’”, September 2011, page 10. Notion that Joëlle Tuerlinckx repeated during an interview with the author in her studio in Brusells, on 1 June 2018.

How to cite this article:
Marjorie Micucci, "Joëlle Tuerlinckx Takes on Vassivière Island, or The Heuristic Point of View." In Archives of Women Artists, Research and Exhibitions magazine, . URL : https://awarewomenartists.com/en/magazine/joelle-tuerlinckx-face-a-lile-de-vassiviere-ou-le-point-heuristique-du-regard/. Accessed 3 December 2022