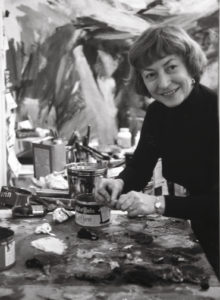 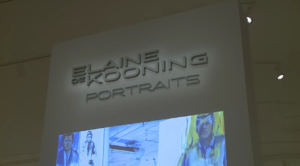 Elaine de Kooning, an influential abstract expressionist painter, was the eldest of four siblings. Her father was plant manager at Bond Bread Company in New York and her mother was described as “interested in the arts” and “dedicated her life to studying”. After graduating from Hall High School in 1936, the artist studied at Hunter College in Manhattan, which she eventually left for the Leonardo Da Vinci Art School, where the teachers were artists. She later enrolled in the American Artists School. She first lived with artist Milton Resnick before she met in 1938 the painter Willem de Kooning, whom she would eventually marry. Describing her conception of abstraction, E. de Kooning claimed, “A painting to me is primarily a verb, not a noun, an event first and only secondarily an image.” In her paintings, she employed forms and an abstract expressionist vocabulary, such as the free use of colour and wide, energetic brushstrokes. The association of abstract processes and figurative motifs became her signature, in brightly coloured and fresh canvases endowed with a strong emotional charge. Her works are preserved by numerous institutions and museums. In parallel to her career as a painter, she also taught in several American universities and was art critic for Artnews. During the summer of 1948, she attended the Black Mountain College, where she painted athletic figures from photographs.

She then realised a number of portraits, notably in the 1950s, of her family, her husband, a number of artists and poets such as Frank O’Hara and choreographer Merce Cunningham in 1962. The latter portrait is representative of the artist’s way of associating strongly figurative elements (the slender figure of a dancer, a facial expression) against a contrasting green and pink background painted with a very gestural use of the brush. Her most widely known portrait series is that of the President of the United States from her era, J. F. Kennedy, whom she followed for various trips in 1963. His assassination affected the artist so deeply that she stopped painting for one year. The famous series entitled Bull Series (1957) was created after she witnessed a bullfight in Ciudad Juarez while she lived in nearby Albuquerque, New Mexico. She realised drawings, watercolours and paintings on the subject: at times the bulls’ silhouettes are perfectly visible, outlined in black against a bed of vibrant colours, as in the oil painting Bull (1958), which brings together pinks, greens, reds, and whites in a strongly dynamic tonality. At other times, the bulls are barely visible. For this series, the artist immersed herself in the prints of Picasso from the 1940s as well as the prehistoric cave drawings from Lascaux and Altamira. Bacchus series (1976–1978) is a series of paintings inspired by sculptures of Bacchus that she had seen in the Jardin du Luxembourg in Paris while travelling in France. “Obsessed” by this imagery, she spent several days drawing it. The works were then painted on the campus of the University of Georgia, where she worked for two years. She combined a dynamic outline of Bacchus’ form, often drawn in black, with a palette of lively and luminous tones (green, lavender, yellow). This transition from sculpture to painting creates an interesting effect – the artist managed to render the sculptural volume of the drunk man into twirls of lines and colours. In the 1980s, following her interest in prehistoric paintings, she went on an excursion to Palaeolithic caves in France and Spain, where she created a series of prints and paintings of mammoths, horses, and bison. Composed of images similar to graffiti, this series revives the spontaneous rhythm of brushstrokes characteristic of her work. In parallel to her paintings, E. de Kooning realised various collages and prints throughout her life. 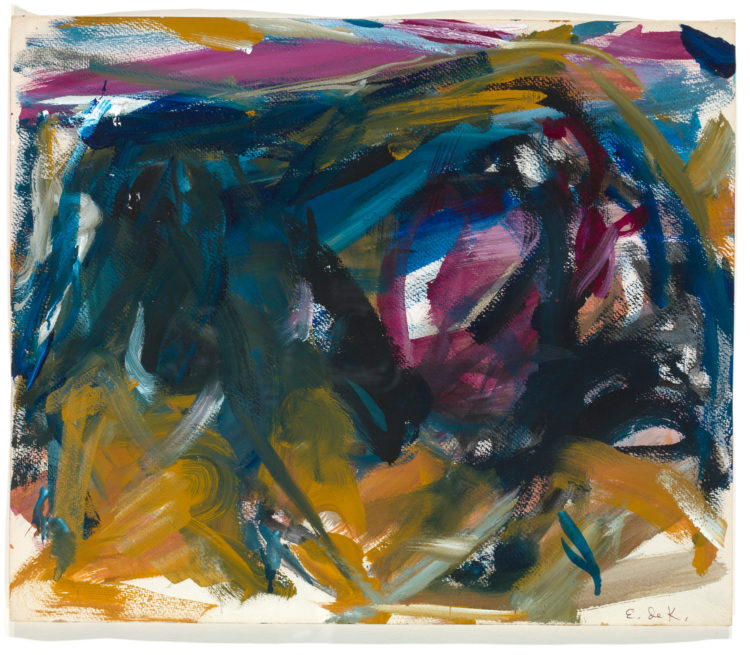 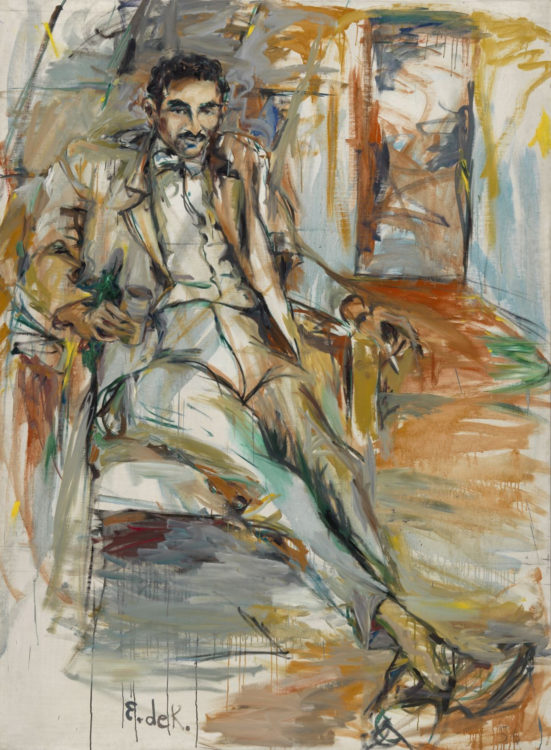 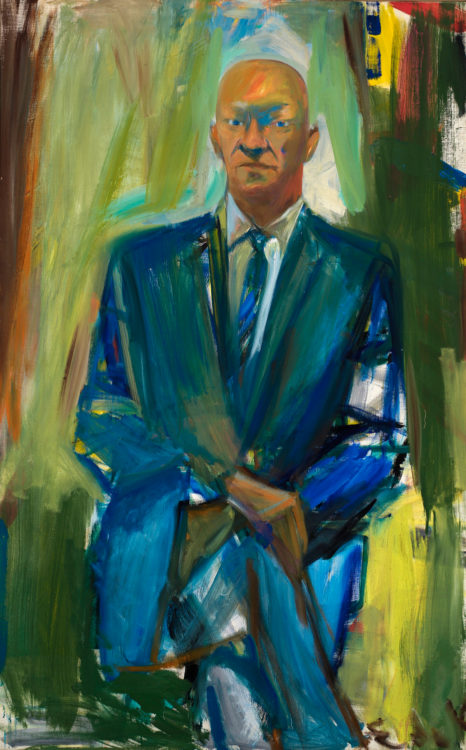 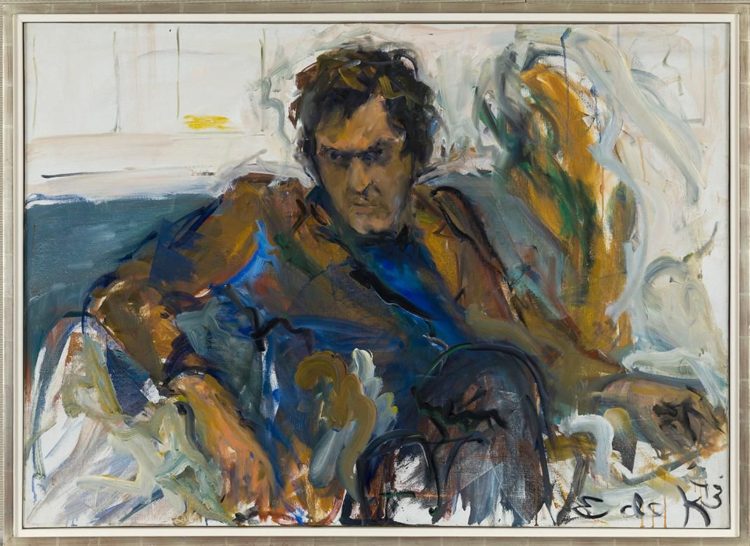 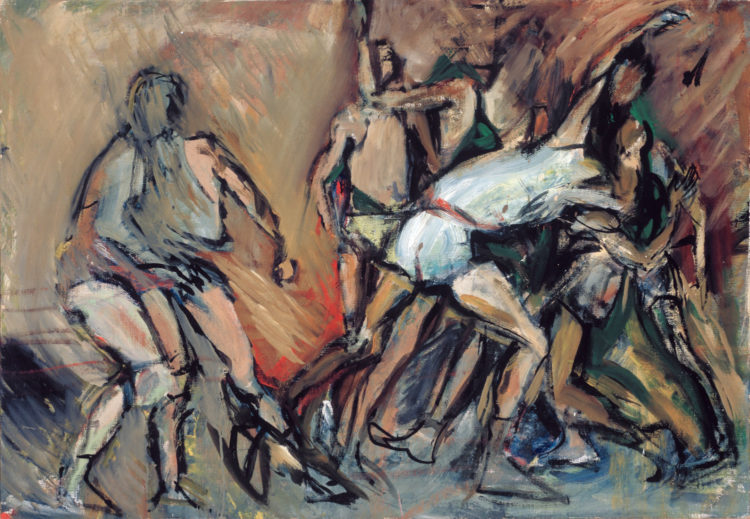