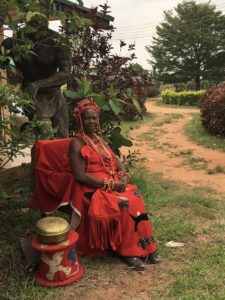 Elizabeth Olowu is the daughter of Oba Akenzua II, the King of Benin. She started her tertiary education in Fine Arts in 1966 at the University of Nigeria in Nsukka, but the Biafran War caused her to discontinue her university education. In the brief period that she studied at UNN, her artistic skills and academic brilliance earned her the best first year student award in Fine Arts. E. Olowu returned to Benin in 1966 where she taught art at Itohan Girls’ Grammar School until 1976 when she entered the newly established Department of Creative Arts at the University of Benin. She graduated in 1979 as the department’s first sculpture major. She enrolled in the MFA program in sculpture, earning her degree in 1984. She specialised in metal casting and her medium of choice was bronze. Although in 1966 she had an initial stint working with a local metal smith whose foundry was situated opposite Itohan Girls’ Grammar School, her most documented sculptures in metal and cement derived from her studies in Benin between 1976 and 1984.
E. Olowu went against the ancient Benin tradition and saying: Okhuo-ise-eronmwon, “a woman does not cast bronze”, to become the first female bronze caster in Benin’s history. She was able to do this because her father was the reigning king who allowed progressive changes in Edo cultural and artistic practices. In the past, members of the bronze casters’ guild, Iguneronmwon, produced bronze works only for the Oba. Olowu learned the practice of lost wax casting from the traditional bronze casters at Igun Street.

She explores traditional and modern ideas, materials, techniques and processes in her sculpture production. Most of her sculptures are about women and motherhood. Some of the works that exemplify her preoccupation with the female body and motherhood are Mother of Many (c. 1981) and Zero Hour I (c. 1981). Mother of Many is a simplified naturalistic sculpture of a seated modern African woman with two of her children – the younger child is firmly held in her right arm, while the older child is glued to her body on the left. The upward gaze of the older child is reciprocated by the mother’s affectionate gaze. Zero Hour I, which is similar to Mother of Many in style, portrays a heavily pregnant woman in a kneeling position. Her gesture expresses the pains of pregnancy. E. Olowu uses cement for her large sculptures. These include Acada (1979) and Monument to Soldiers of the Biafran War (1984) which honours the soldiers that fought the Civil War that lasted from 1967 to 1970. Her bronzes titled  Oba (1979) and Iyoba (1979) are done in the traditional Benin sculpture style, but the portrait sculptures of her father – Oba Akenzua I and II (1979 and 1980) – and Oba Ovonramwen (1996) show her competence in academic formalism.

E. Olowu has had six solo shows and her work has been included in many group exhibitions in Nigeria and overseas. Her solo exhibition in China in 1995 coincided with the UN World Conference for Women, “Beijing ’95”. She was also featured in the 3rd Havana Biennial in Cuba in 1989. Her last major exhibition and public art project were Of Bronzes and Prints with her daughter, Peju Layiwola, in 2003 at the Goethe-Institut Lagos and Whose Centenary? (2014) in Benin Cityin, Nigeria. 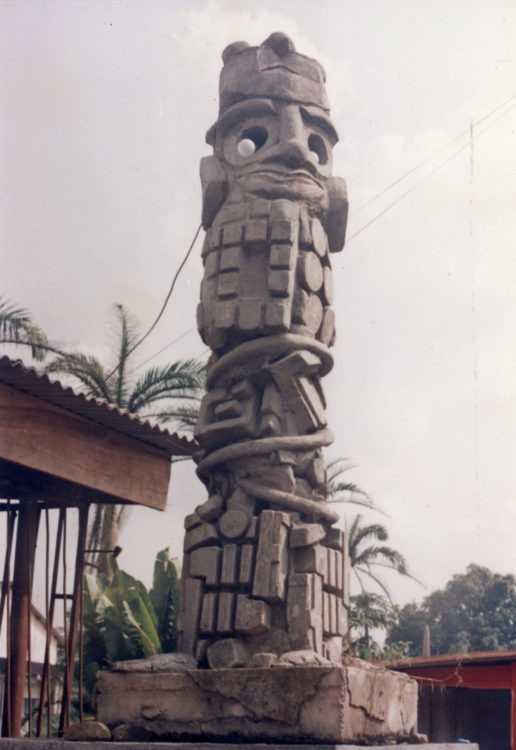 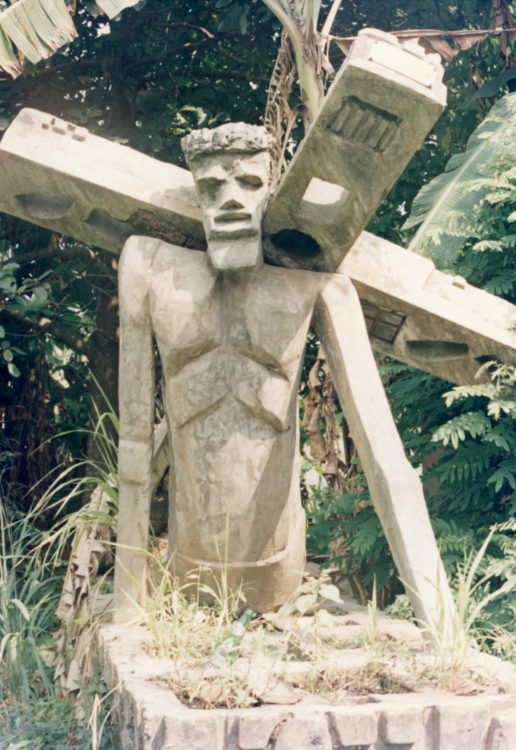 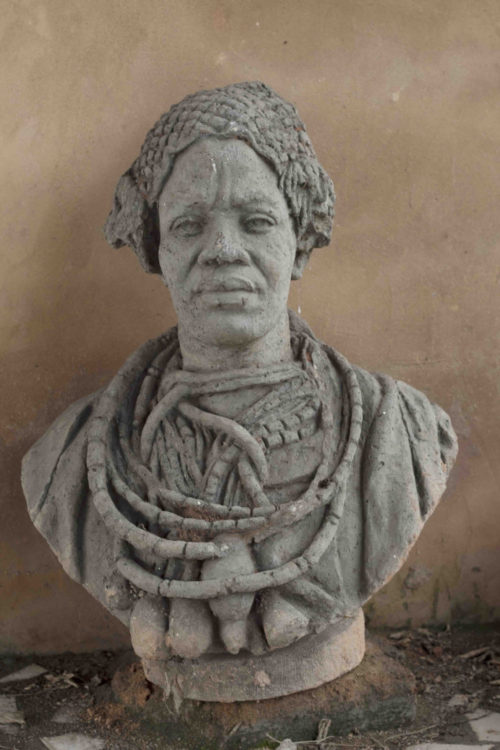 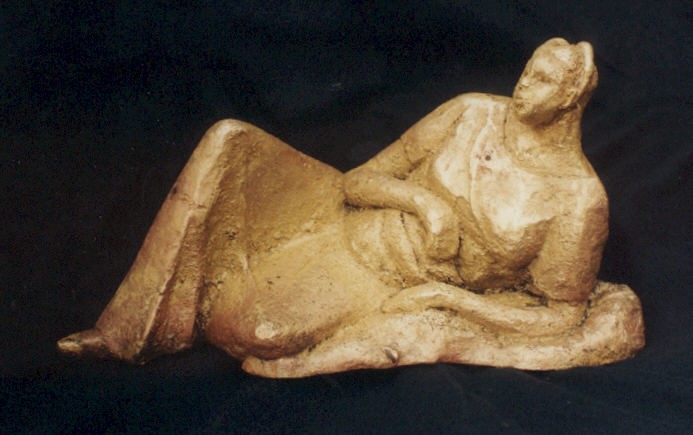 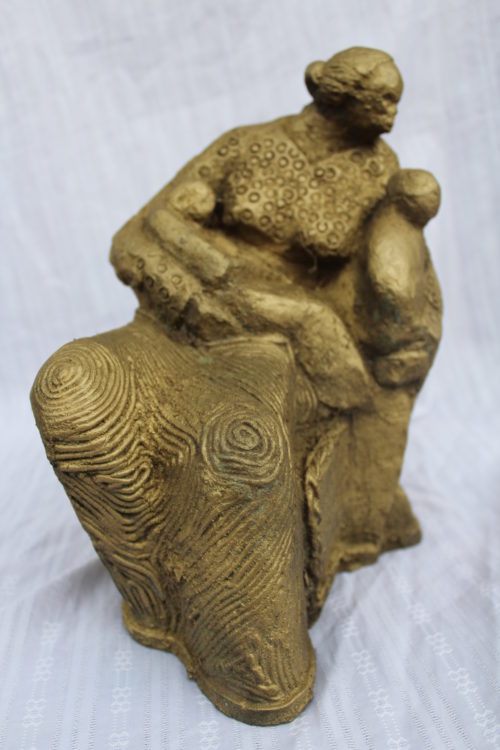 Elizabeth Olowu, Mother of Many, Brass, 1981 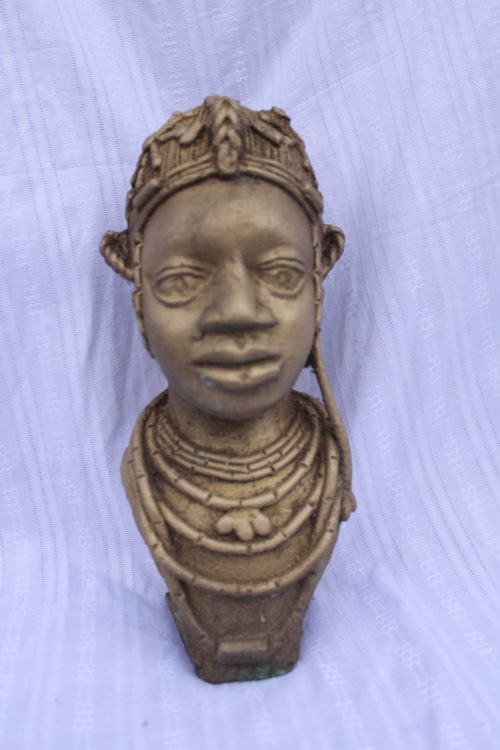 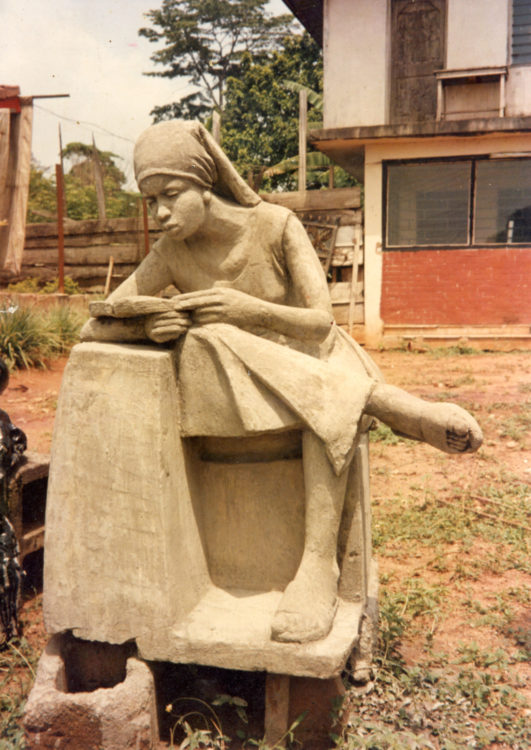 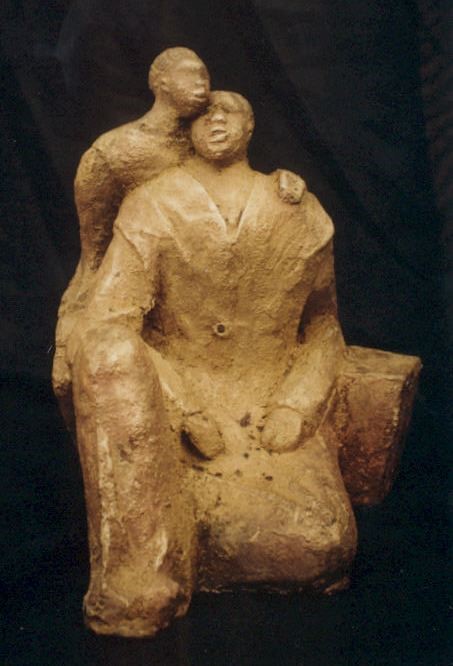