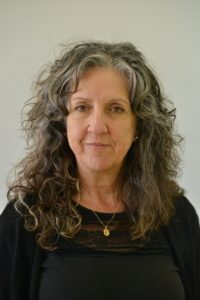 Baruchi, Efrat, “Other” Expression Black Abjection, Landscape Writing and Conceptual Practices in the Artwork of Manar Zuabi, Thesis, Ben-Gurion University of the Negev, The Faculty of Humanities and Social Sciences, Department of the Arts, 2014

Altenberg, Theo, “Beyond the Frame: Painting as Performance in Recent Exhibitions”, in Frieze magazine, issue 153, March 2013

Manar Zuabi is an installation, performance and video artist. She is also an independent curator, educator and social activist, with a Master’s in Fine Arts from the University of Haifa. She works as an advisor for graduate students at the Bezalel Academy of Arts and Design and lectures in visual arts at the University of Haifa. She is one of the founders of Masar, an alternative experimental school in Nazareth. Since 2003 she has presented fourteen solo exhibitions and participated in over fifteen group exhibitions. Among them, Humma [Fever], a performance at the Qalandiya International Biennale 2, Haifa (2014); Berlin Performs (2015); On the Edge of White, a performance, installation and dance, with choreographer and dancer Shaden Abulasal at the Ramallah Contemporary Dance Festival (2016); and the video In Between for the exhibition Bodyscapes at the Israeli Museum, Jerusalem (2020-2021).

Beside questions of identity, M. Zuabi deals with issues related to daily life, political and social cooperation, and Arab culture in the Israeli space. The use of the female body as a feminist tool, although not defined by her, is also evident in her performances. She uses performance art, the language of the body, to convey messages that transcend the personal and relate to hegemony and governance at both the social and political level. Her physical presence within the performance space is significant, especially when she enlists additional performers such as her husband, dancers or a professional choreographer as partners in the process of weaving the artistic act.

M. Zuabi’s works include three basic intertwined elements: matter, space and ephemerality. Through them she manages to create cohesion in the broad context that can be stretched between the infinite, the mystical and the existential, interwoven by the artist in the context of Arab culture. Sometimes the language plays in the background, sometimes elements that are drawn from the depths of the family memory, or those related to Arab heritage, and sometimes the music is a necessary connection in the work. As a graduate of the Wingate Institute, Israel’s National Centre for Physical Education and Sport, dance, the movement of the body, has become an essential element in her works.
The materials that M. Zuabi often uses are ones that feminist art has long appropriated, such as nylon stockings, woollen and metal threads, hats, hairpins, etc. These materials convey complex messages that are not necessarily just feminist. Through her art, M. Zuabi deals with the ephemerality of life. She addresses this issue through the use of everyday feminine materials that degrade over time. The same goes for the installations she creates; these are built and disassembled during the show, in front of the audience, or later. During performances she also examines corporeal movement, when expressing weakness or inability. She also attaches aesthetic values to the movement based on the use of certain colours, such as black and white, as she attributes importance to the aesthetics of colour. Black expresses totality, and the choice of these two contrasting colours also expresses the absurd experience of life.

M. Zuabi’s works react to the current reality and to the exclusion of Palestinian Arab culture from the Israeli public space. In her work she deals with the desire to interduce the Arabic language into the space. In other works, she brings together art and dance, using the body in various emotional and physical states. 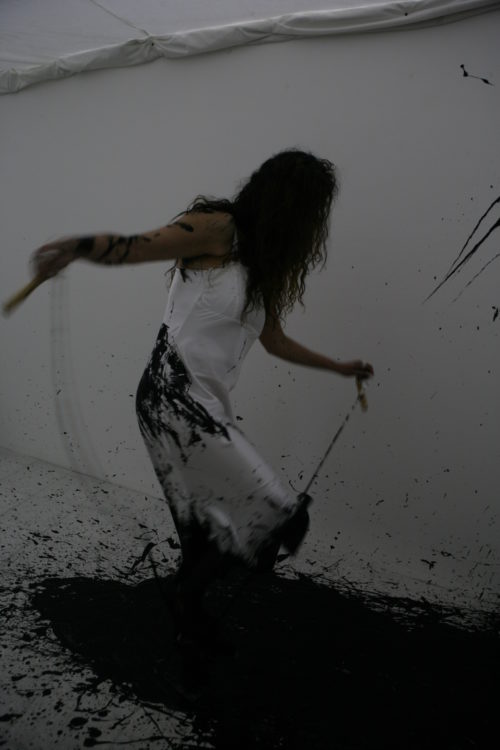 Manar Zuabi, I’m not a reader (In Between), 2009, performance and video, duration of performance: 30-60 min, duration of video: 3 min, Al Ma’mal Foundation for Contemporary Art, Jerusalem, Photo by Issa Freij 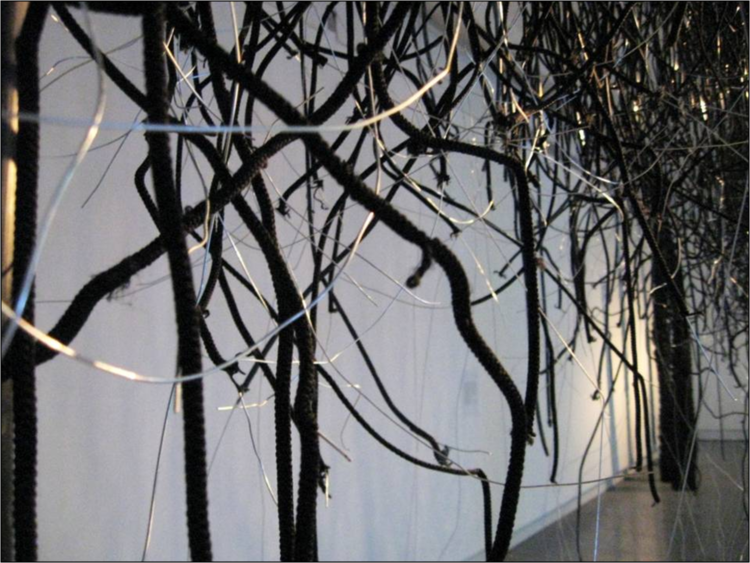 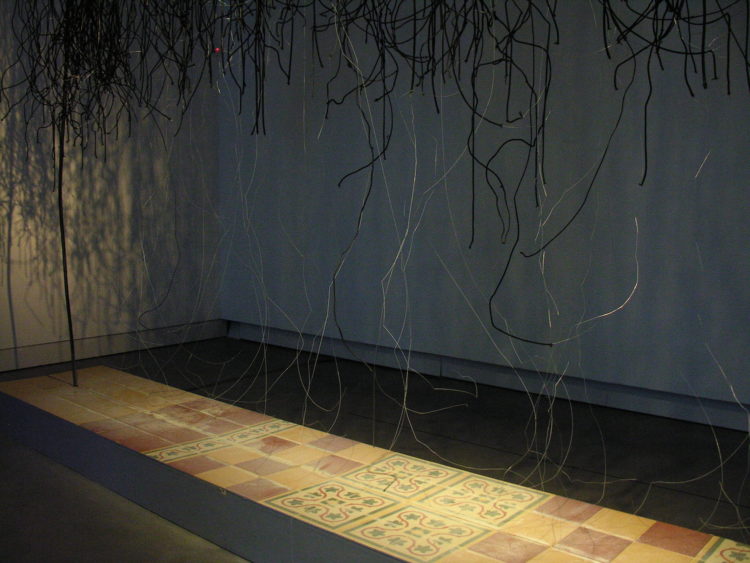 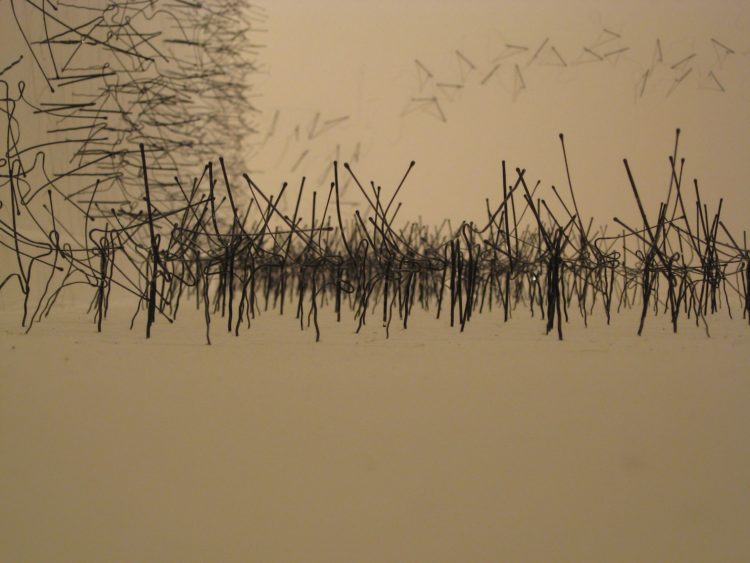 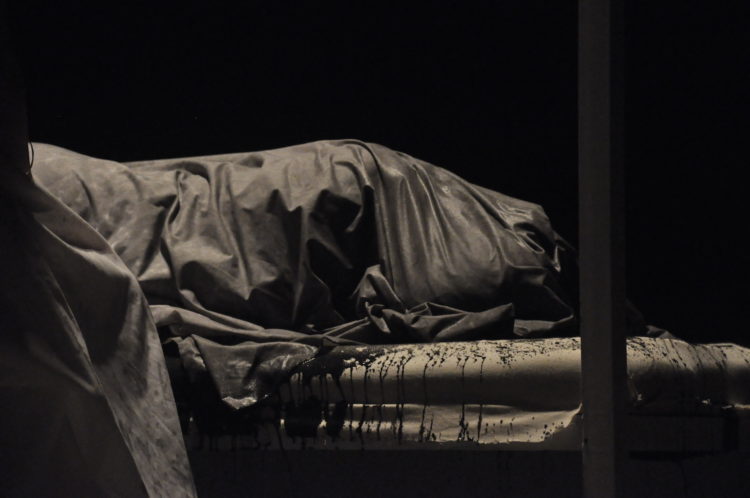 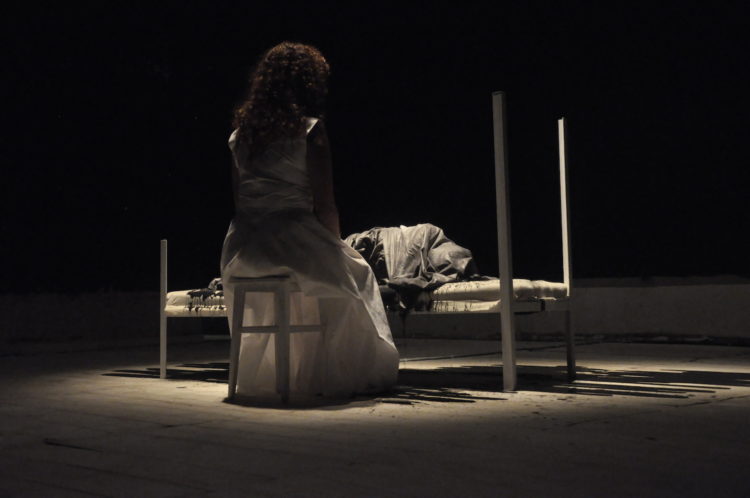 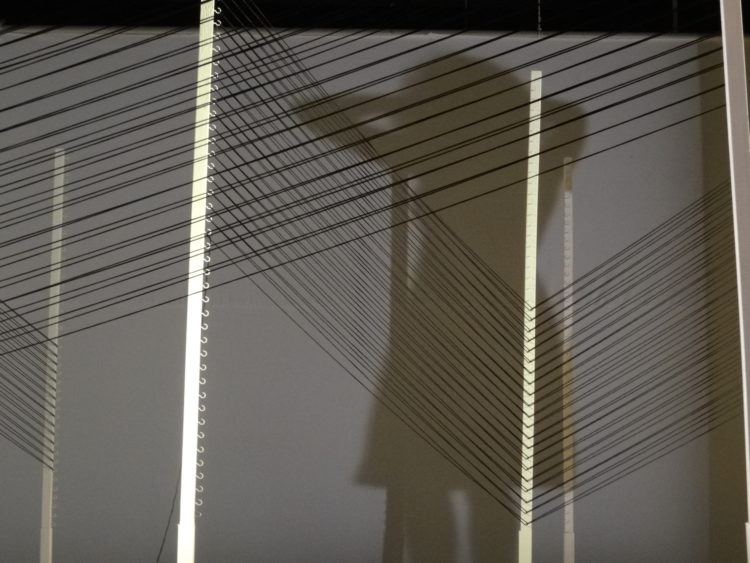 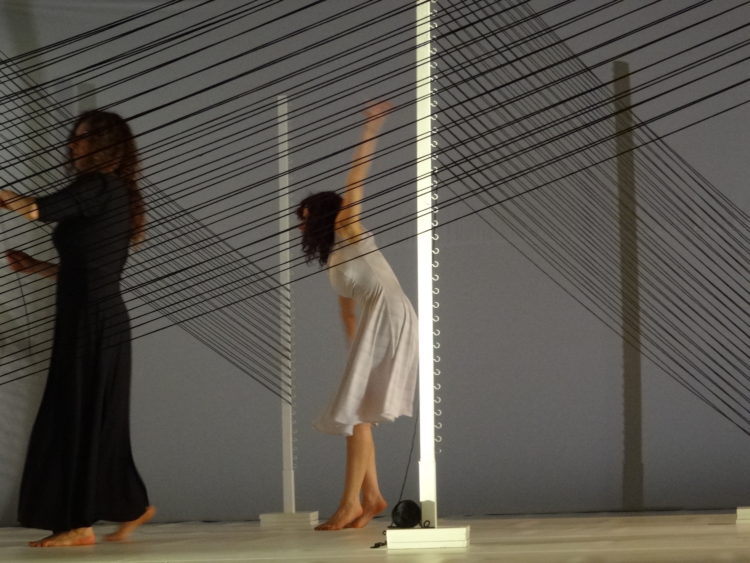 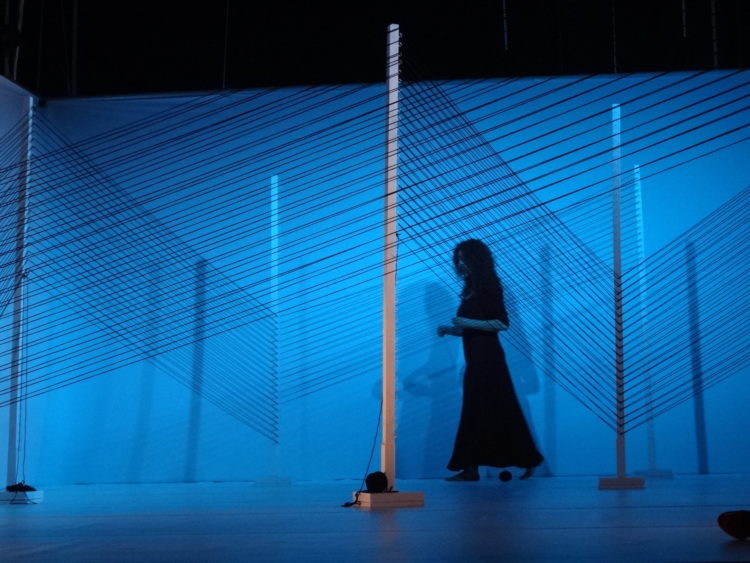 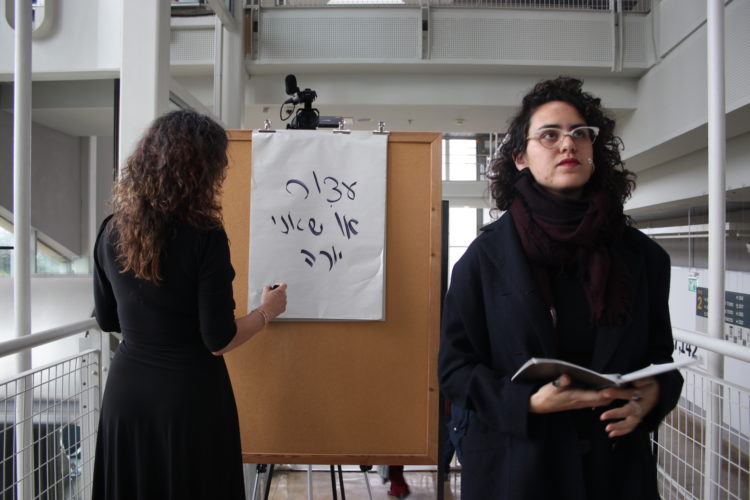 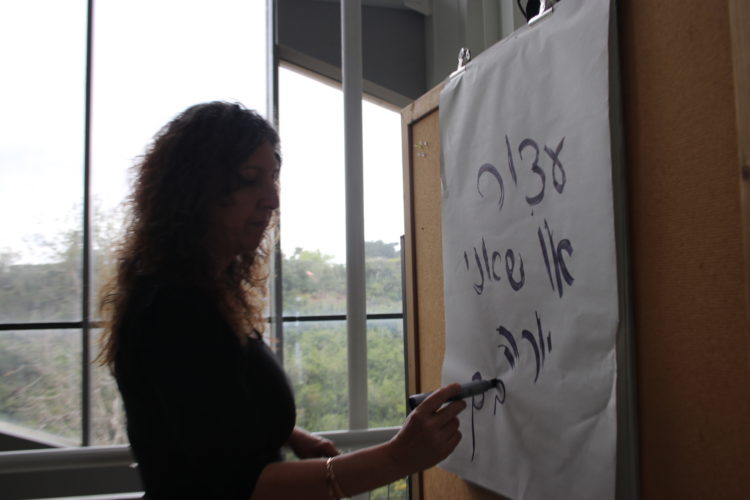 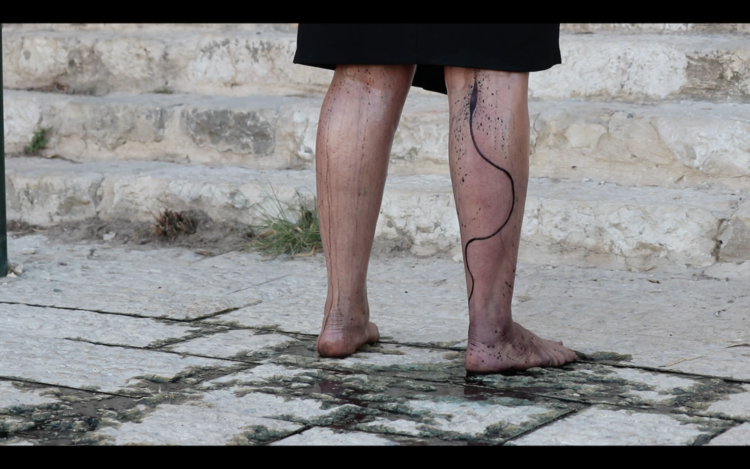 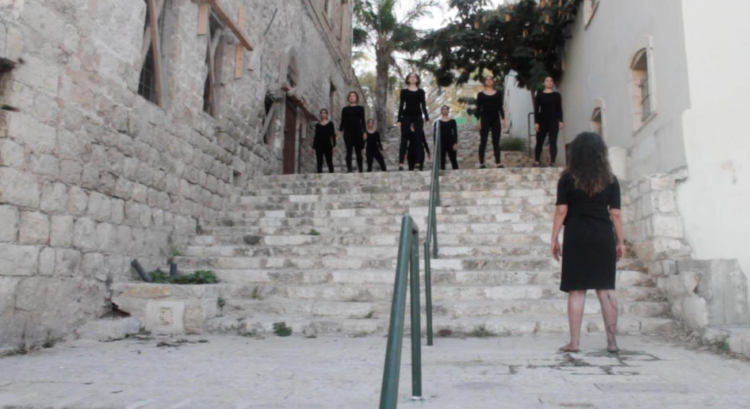 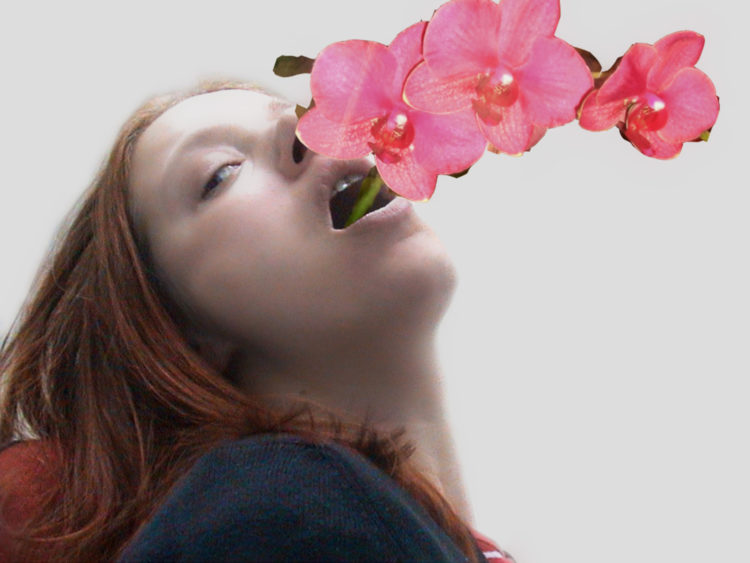 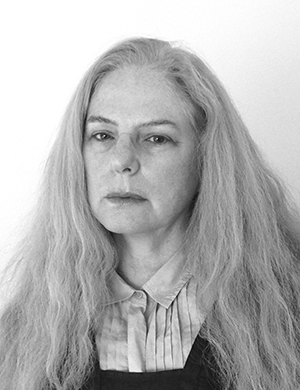