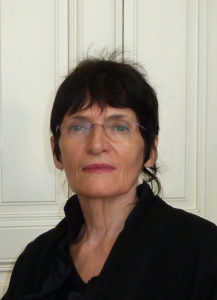 For more than 50 years, Renate Bertlmann has dedicated herself to the spirit of rebellion, through her art. Almost obsessively, her art refers back to bodies, focusing mainly on their intimate zones and giving them a voice. She studied painting, along with conservation and technology, at the Academy of Fine Arts in Vienna (1964-1970). Directly afterward, Bertlmann began lecturing at the Academy of Fine Arts in Vienna, a post she held until 1982. When Renate Bertlmann read the essay “Why Have There Been No Great Women Artists?” by Linda Nochlin, it “woke her from a Sleeping Beauty slumber,” as she herself put it. She began to look for female comrades, working for women’s groups like AUF-Aktion Unabhängiger Frauen [Action of Independent Women], IntAkt [International Action Group of Women Artists], and Women against Pornography in New York. She also wrote pamphlets; founded the female artist groups Marebagroup (1974) with the Australian artist Barbara Strathdee and the Trieste artist Emanuela Marassi and the BC-Collective (1976) with the Austrian artist Linda Christanell; and presented her works at the first Austrian exhibition of feminist artists, curated by VALIE EXPORT, called MAGNA. Feminismus: Kunst und Kreativität [MAGNA: Feminism-Art and Creativity]. In 1977, she was invited to a performance festival in Bologna. At the Museo Comunale d’Arte Moderna, she performed for the first time Deflorazione in 14 Stazioni [Deflowering in 14 stations]. In 1978 Bertlmann performed at the Modern Art Gallery in Vienna Die Schwangere Braut im Rollstuhl [The Pregnant Bride in the Wheelchair], whose theme was the incommensurability of motherhood and the role of the female artist. During the opening of the exhibition Museum des Geldes [Museum of Money] at the Städtische Kunsthalle Düsseldorf in 1978, Bertlmann presented the performance Die Schwangere Braut mit dem Klingelbeutel [The Pregnant Bride with the Collection Bag]. One year later she performed Let’s Dance Together at the Modern Art Gallery in Vienna and at the Stichting de Appel in Amsterdam. In 1980, Bertlmann was invited by Martha Wilson to perform Sling Shot Action, which addresses sexual desire, in the alternative art space Franklin Furnace in New York. In 1982, Bertlmann was invited to design a billboard for documenta 7 in Kassel. The artist installed a version of her work Washing Day on a billboard, partly with drawing, partly with genuine latex “skins”.

In 1989, after working obsessively for two decades, Renate Bertlmann felt the need to recapitulate her work. She defined the maxim of her art as AMO ERGO SUM (I love, therfore I am). Her art assembles objects, installations, films, drawings and lyrics, and arranges them in three parts: Pornography, Irony and Utopia.
The category Pornography addresses the “war of the sexes”, with its “victims and perpetrators”, and includes phallus-objects like Der Erstgeborene [The Firstborn], the 14-Linge [14-Lets] from 1980 or the Farphalle Impudiche [Shameless Butterflies] from 1985.
To quote the artist: “Irony is about the transformative character of the skin and how we experience ambivalent feelings through it, like tenderness and pain, cold and heat, attraction and repulsion, disgust and pleasure. Irony is both weapon and shield when we are devoting ourselves to these intimate topics.” The protest-objects like Messer-Schnuller-Hände [Knife-Pacifier-Hands], Bru(s)tkasten [Breast Incubator] from 1981 and Streicheleinheiten [Caresses] from 1982 belong to Irony.  Utopia is not about visions of the future. Instead, it confronts the unknown, along with asceticism, denial and practices of death. The works Hier ruht meine Zärtlichkeit [Here Rests My Tenderness] from 1976 and the altar Wann werden uns die Theologen endlich etwas von Zärtlichkeit erzählen [When Will Theologians Finally Tell Us Something About Tenderness] from 1980 belong to Utopia.

In 2010 the SAMMLUNG VERBUND Collection, Vienna, presented a group of works by Renate Bertlmann in the exhibition DONNA: Avanguardia femminista negli anni ´70, a show which toures through Europe and USA till now under the name The Feminist Avant-Garde of the 1970s with venues in Madrid, Brussels, Halmstad, Hamburg, London, Vienna, Karlsruhe, Stavanger, Brno and New York. In 2016 the SAMMLUNG VERBUND collection presented a retrospective of Renate Bertlmann’s works at the Vertical Gallery in Vienna, and published the first comprehensive book in English and German.
Bertlmann is a recipient of the Theodor Körner Prize for Visual Art and Photography, the Vienna City Support Award, and the Great Austrian Sate Prize, which is the highest honour that the Republic of Austria awards to an artist for outstanding performance. It has been awarded since 1950, and Renate Bertlmann is the third Austrian woman artist to receive the prize, after Maria Lassnig and Brigitte Kowanz. 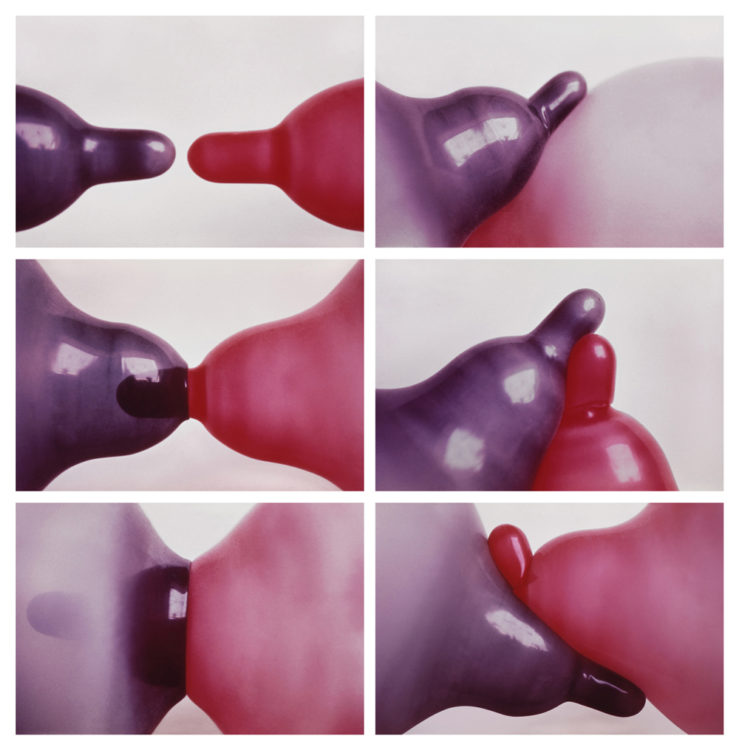 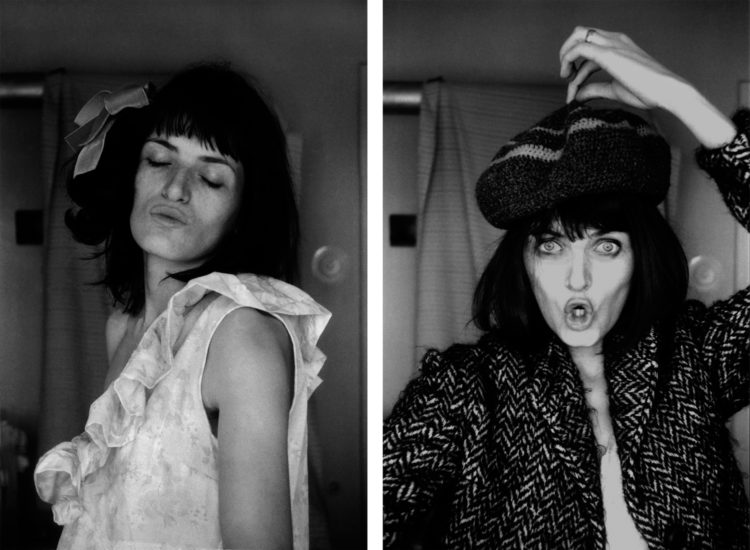 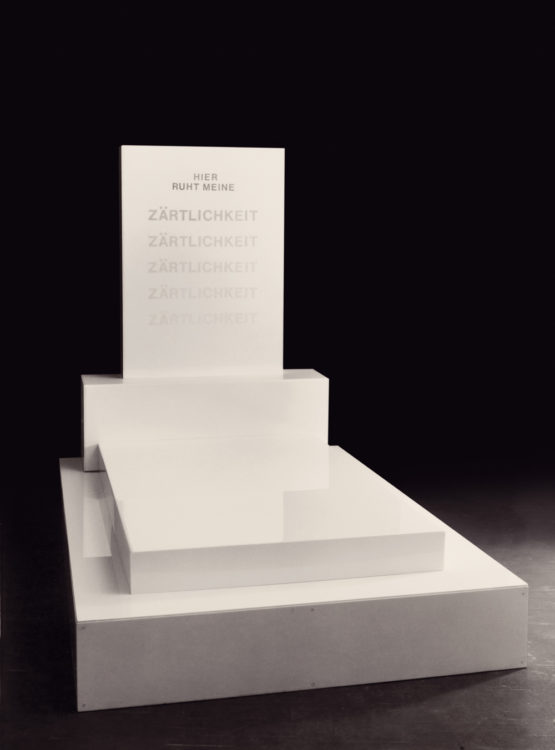 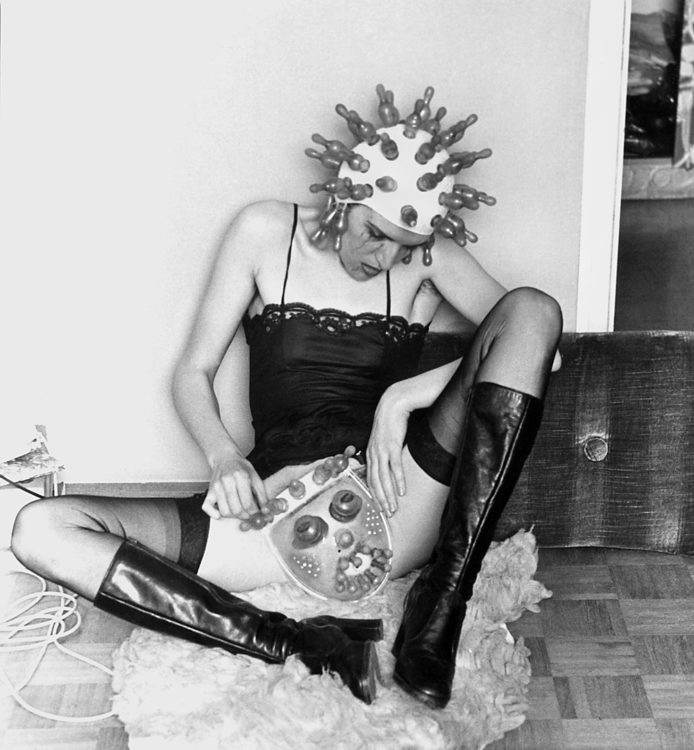 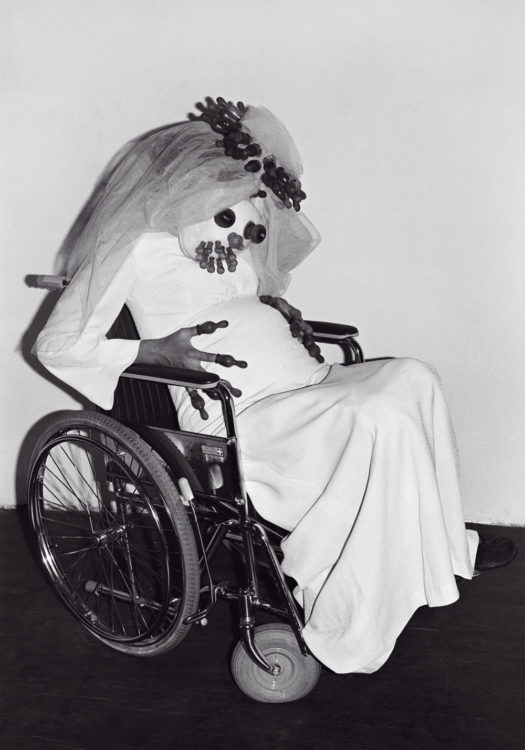 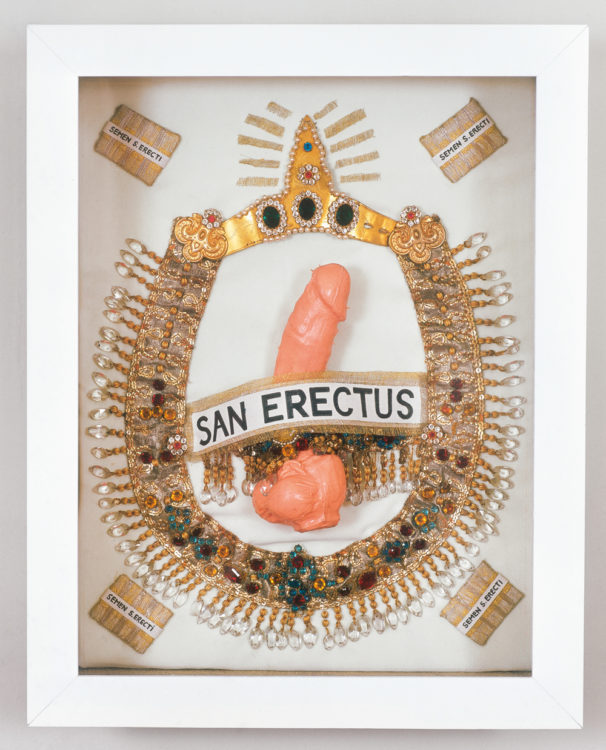 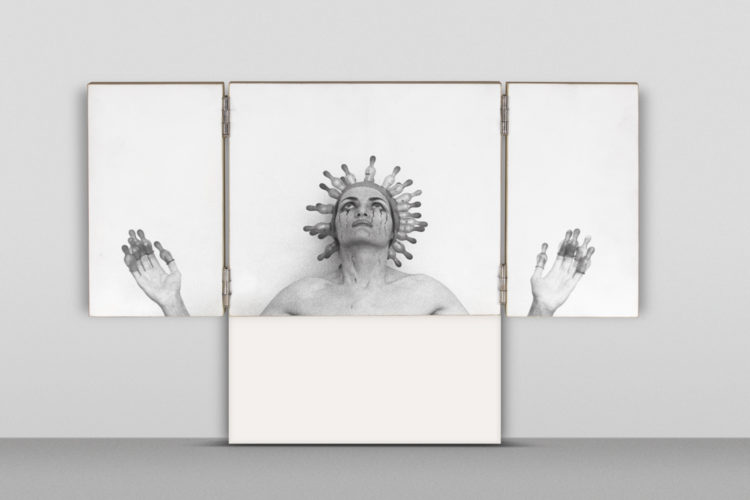 Renate Bertlmann, When Will Theologians Finally Tell Us Something About Tenderness, 1980, black and white photograph on wood, 200 x 500 x 21 cm, © ADAGP, Paris 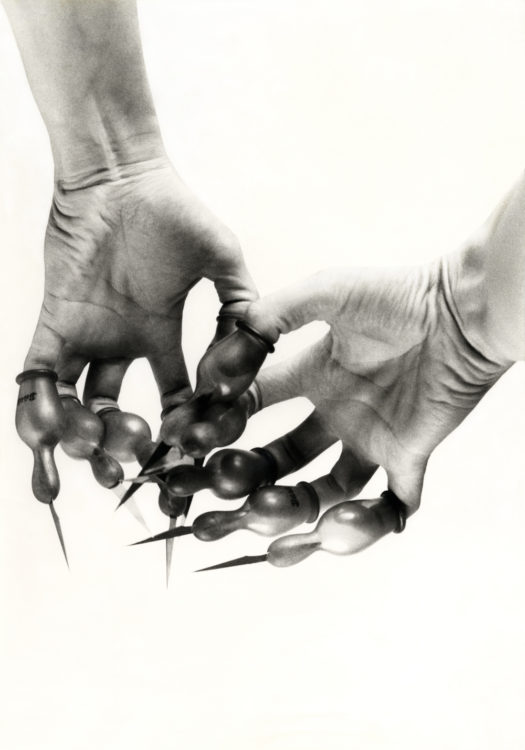 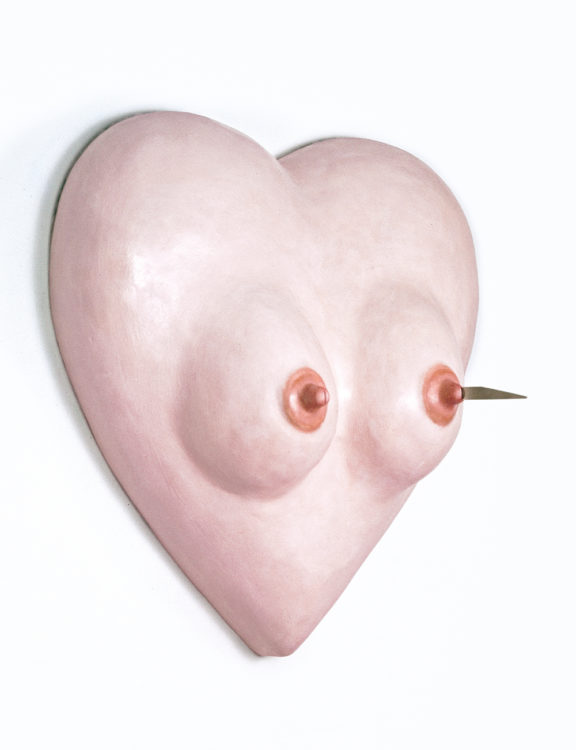 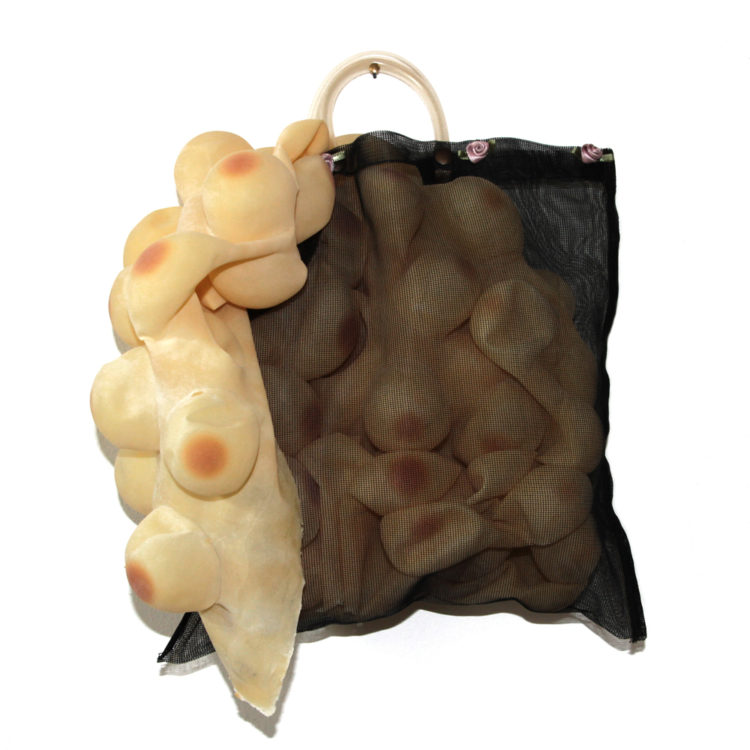 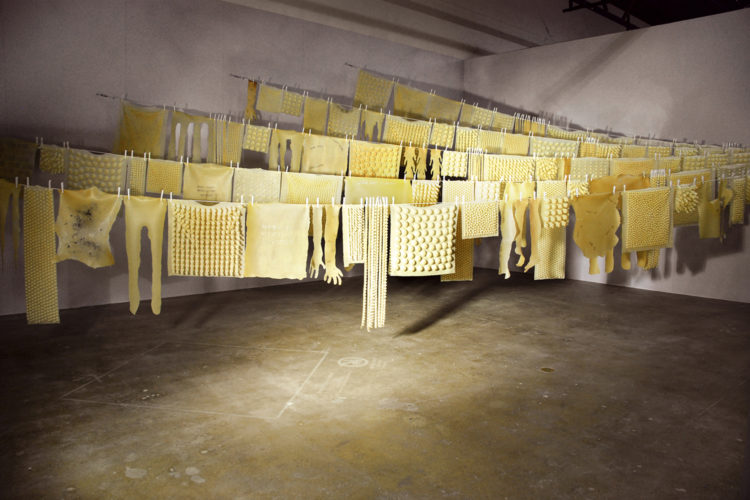 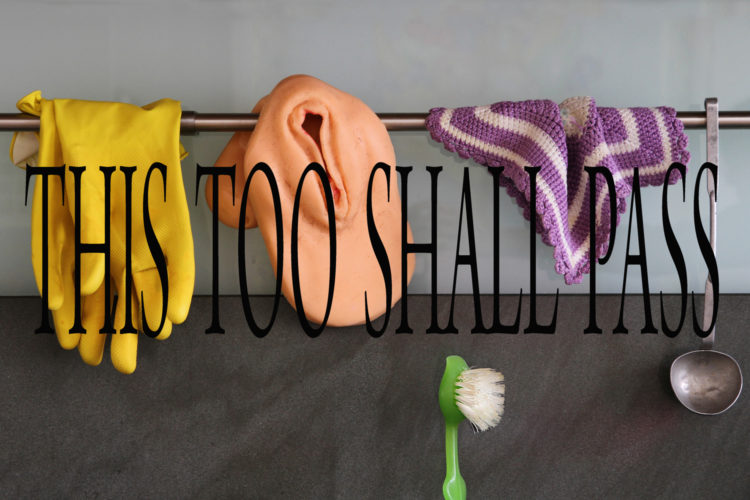