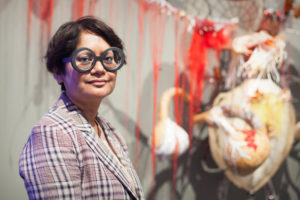 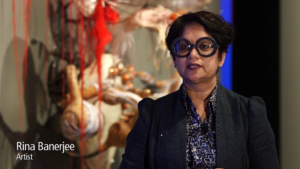 Rina Banerjee emigrated with her family at a very young age, first to London, then to the United States, where she received a degree in painting and engraving from Yale in 1995. Influenced by this oscillation between two cultures, her complex body of work has always based itself in the subject of migration through a reflection on memory, experience, the mobility of communities, and local and global issues. On the whole, her work questions the notion of identity, as well as those of femininity and sisterhood. As a member of the diaspora, R. Banerjee evokes its fragile nature in a society that strives for multiculturalism. More broadly, she addresses the question of how we relate to others – in the context of the progression of AIDS, for instance – or to foreigners, whom she often depicts as insects.

Her work also problematizes the notions of ethnicity or supposed exoticism, as can be seen in her reflections on the symbolism of clothes in the late 1990s. It is always highly conceptual, whether this concerns her installations, like her series about the Taj Mahal, Take Me, Take Me, Take Me… to the Palace of Love (2003), or her – occasionally “handmade” – works on paper, like Seasoned by hurricanes, sweet water and salty air this unearthly place made into home for “she” who bit twice the fruit of its displeasure (2007), in which she mixes ink, acrylic paint, watercolours, and sometimes glass beads. The titles, with their mistakes and lengthy syntaxes, enable her to play on language and sounds, just as she plays with postures, warm and cold colours, organic and industrial materials, transparency and space, by multiplying floral and plant patterns to fill in the gaps.

Juxtapositions, connections, and tensions arise between earth and sky, without any of one element taking precedence over the others. R. Banerjee uses enigmatic or universal figures, like snakes or spiders, to open up a vast field of possibilities and to free objects from determinism; by inspiring fascination or repulsion, they become, as if by magic, what they were not initially thought to be, as they populate the artist’s both dark and alluring works. 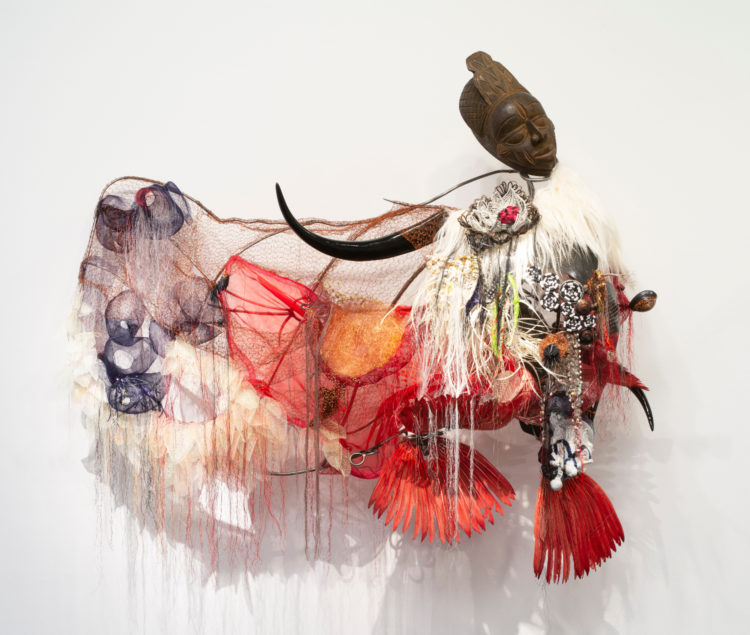 Rina Banerjee, Sealed with a Kiss, kiss me once, make me nice, mix my blood, steal the contract for charity with rice and for modesty, race, purity and inheritance ask my father for permission, 2018, mixed media, 70 x 100 x 35 cm, Courtesy Nathalie Obadia, © Bertrand Huet 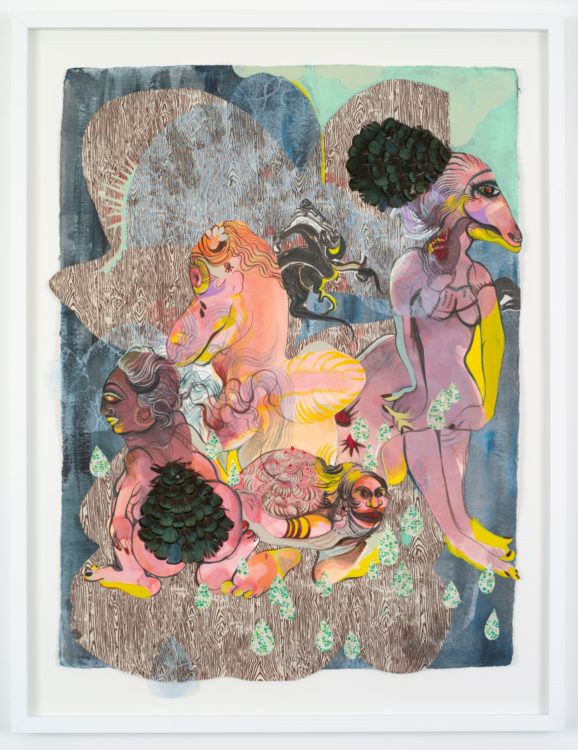 Rina Banerjee, A new citizen of a new family, a new comer, like immigrant farmer, a stolen child or a adopted love she enters her grooms world as welcomed guest or hungry pest, 2018, watercolor and ink on paper, 90 x 68.5 x 3.5 cm, Courtesy Nathalie Obadia, © Bertrand Huet 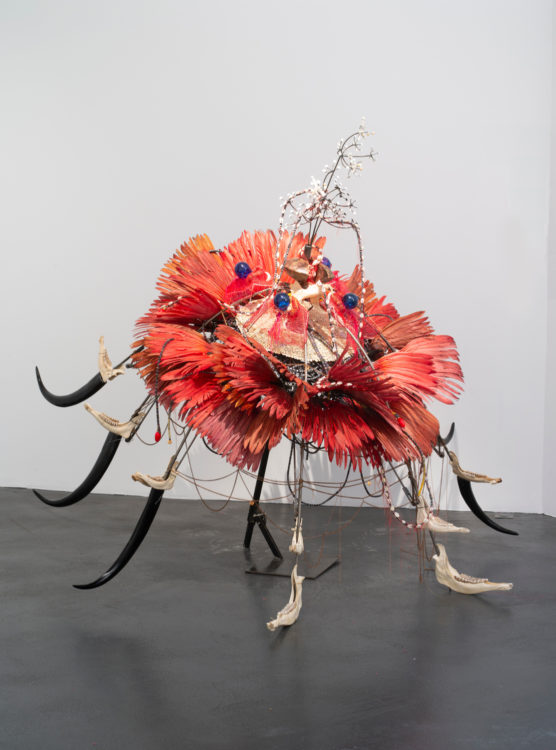 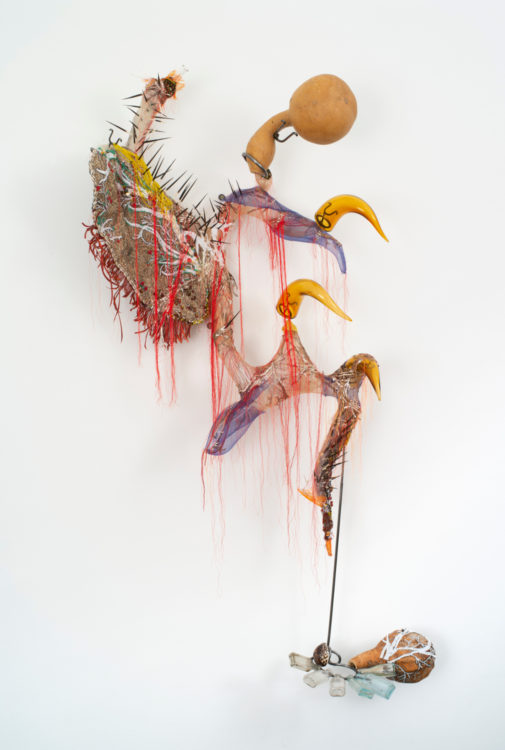 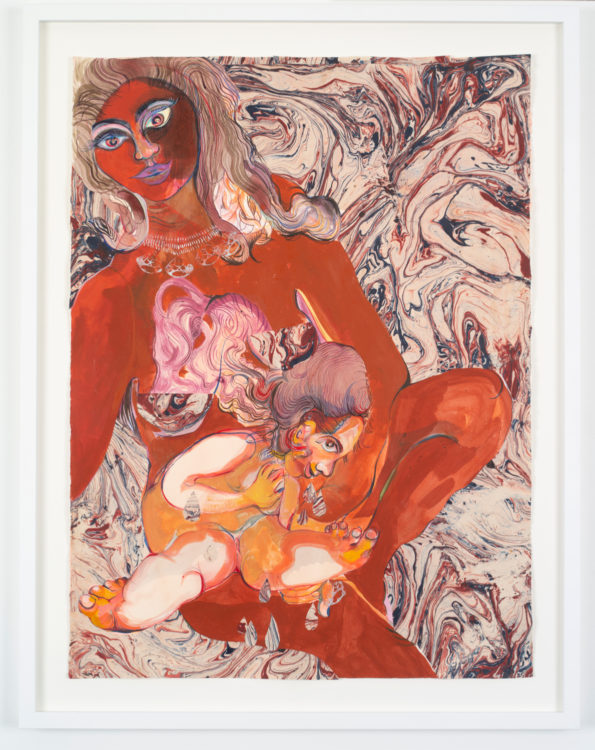 Rina Banerjee, Kiss me at birth everything is going to be better now… not forever, no contract, no promises can sever birth mother forever, 2018, acrylic, ink and collage on paper, 76.2 x 55.9 cm, Courtesy Nathalie Obadia, © Bertrand Huet 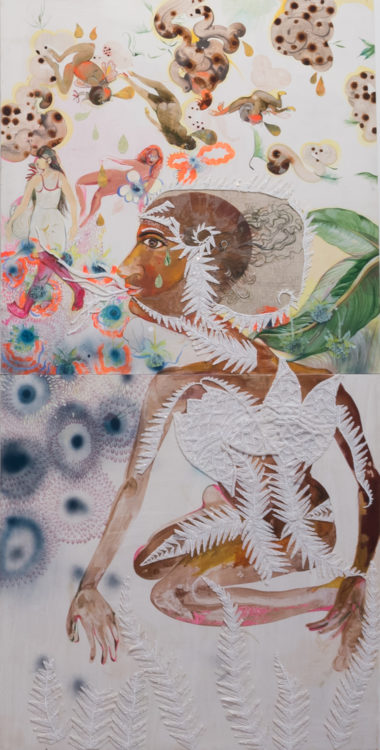 Rina Banerjee, Mother gathered Three and no more dirty stones, tossed them to sky that could break what had hardened her ground and without frown or flirt of flower father like grease or butter slipped aside to free from forty and some more grown men who held her, 2017, acrylic and collage on wood panel, 203.2 x 101.6 cm, Courtesy Nathalie Obadia, © Bertrand Huet

Rina Banerjee, Not like Superman, a superwoman, unlike kryptonite, like a Native of your country’s forrest,it’s soil is what you are and you trust, coined as home is, a currency weighted down in stones, 2018, ink and acrylic on two wooden panels, 243.8 x 121.9 x 5.1 cm, Courtesy Nathalie Obadia, © Bertrand Huet 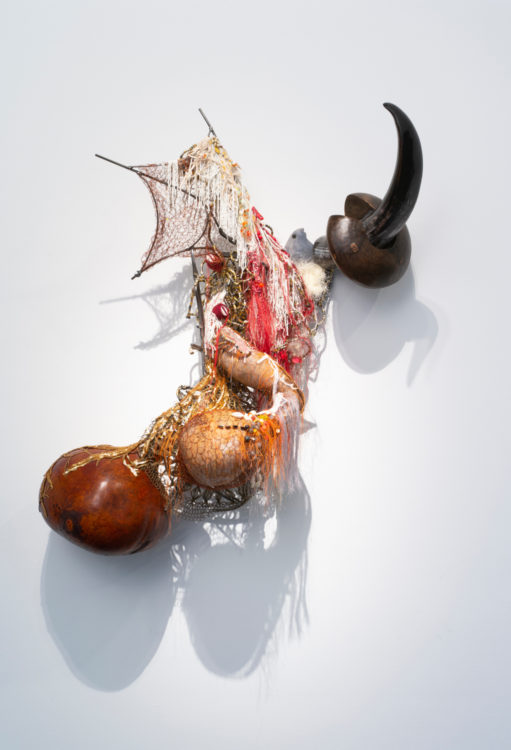 Rina Banerjee, Wedding thieves, they stole her away on that blessed day, full that was a day full of frills and ruffles, borders draped,dragged, pinched to anchor, barefoot petticoat and chemise, shoulder pads and anklets, stole her from her family, …, 2018, mixed media, 85 x 79 x 49 cm, Courtesy Nathalie Obadia, © Bertrand Huet