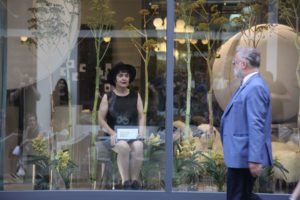 Vlasta Delimar: This is I. Retrospective Exhibition 1979-2014, Museum of Contemporary Art, Zagreb, May-August 2014

Vlasta Delimar graduated from the School of Applied Arts in Zagreb in 1977. She began working in the late 1970s together with a neoconceptual group known as the Group of Six Artists. The themes of V. Delimar’s early work – the female body, personal autonomy and notions of womanhood – would eventually solidify as the core of her artistic interest. Her early piece The Transformation of Personality (1980) took the form of a documented mock fashion show set in Zagreb’s Student Centre, which at the time was one of the most important alternative venues for emerging artists. V. Delimar, the only model in the show, eventually appeared completely naked. She herself frequently said that the naked body cannot deceive: it is the truthful medium of art. The same applies to sexual pleasure and the powerful potentialities it provides, as seen in a series of modified black-and-white photographs Visual Orgasm (1981) that portrays the artist’s sexual climax.

In 1993 the central institution for contemporary art in Croatia, the Museum of Contemporary Art in Zagreb, organised the artist’s exhibition called My Poverty. In those socially turbulent years, after the breakup of Yugoslavia, a corresponding shift in her artistic attention took place. Underpinning it is a series of performances called Mature Woman (1997); in one, she is sitting with widespread legs, peeling vegetables in a window screen. By overacting and exposing, she is playing with the idea of a decorous middle-aged post-socialist woman. In Taking a Stroll as Lady Godiva (2001), V. Delimar rode naked in Zagreb city centre on a white horse without official approval to do so. She addressed injustice caused to an individual who wants to live by her own rules, but also voiced the criticism of public monuments depicting heroic horsemen by making an anti-monument gesture in order to subvert the traditional iconography. Men Should Be Trusted(2003) revealed that V. Delimar does not necessarily speak from a proclaimed feminist position, but rather from an internal narrative logic, taking primarily her own female experience as the starting point. The work consisted of billboards depicting V. Delimar standing in the grass, breasts exposed, smiling and waving. In front of her on the ground are sheets of paper, from which we can read the handwritten title. A group of feminists felt obligated to intervene. Although V. Delimar’s self-interpretation does not align with feminist endeavours, her art still carries a strong feminist potential. For several years, from 2005 on, she led an international multimedia project My Land, Štaglinec. In 2009, together with the celebrated Croatian artist Antonio G. Lauer (b. 1937, aka Tomislav Gotovac) and her partner Milan Božić, V. Delimar made another well-known nude Zagreb stroll Two Men and a Woman. She continues to perform naked, proudly presenting an aging body. The Right to an Orgasm at Over 60 (2017) addresses themes of shame and sexual repression in old age, uncovering the concepts of socially controlled bodies and women as desexualised caregivers.

The growing recognition of her work has been evident both internationally in numerous collaborations, and locally in two retrospective exhibitions that took place in 2014 and 2020. 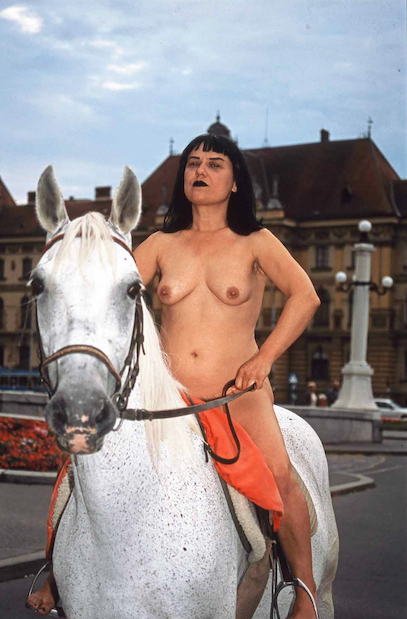 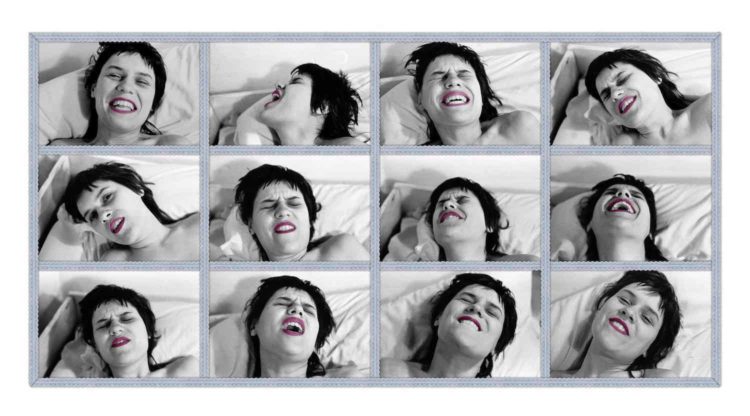 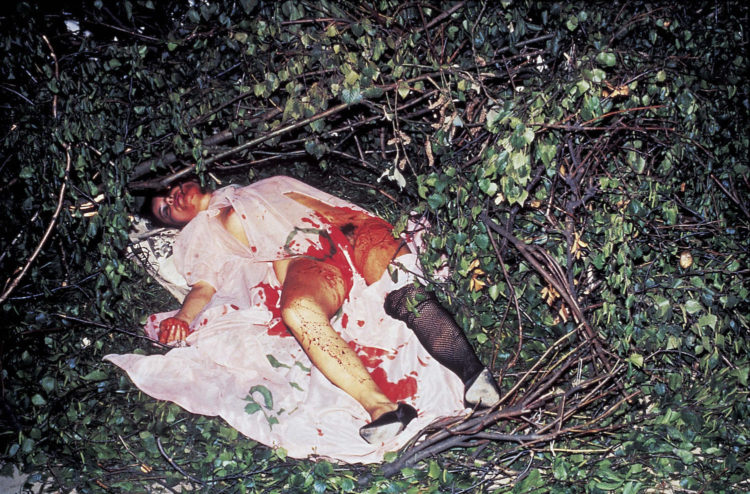 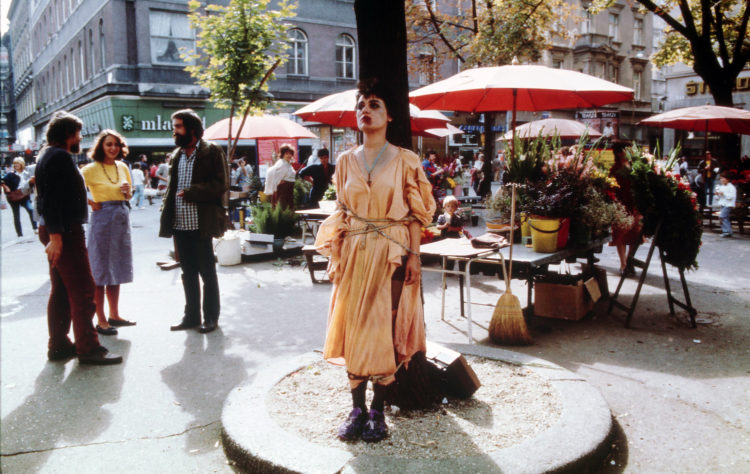 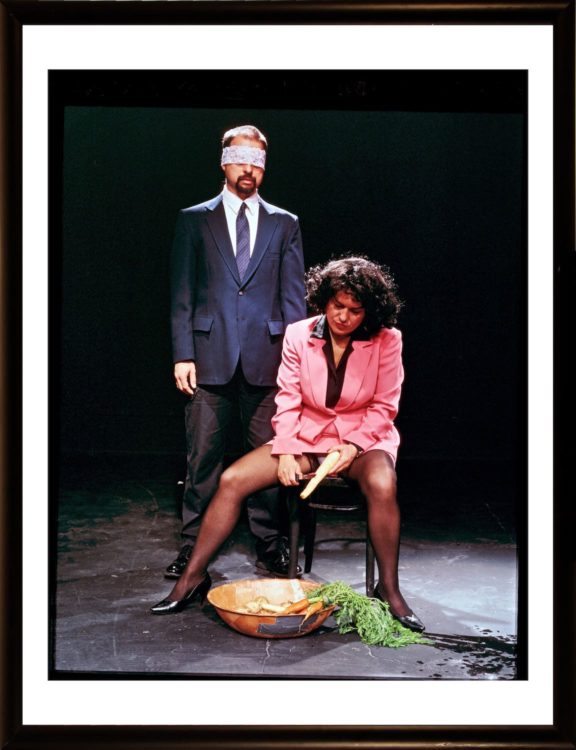 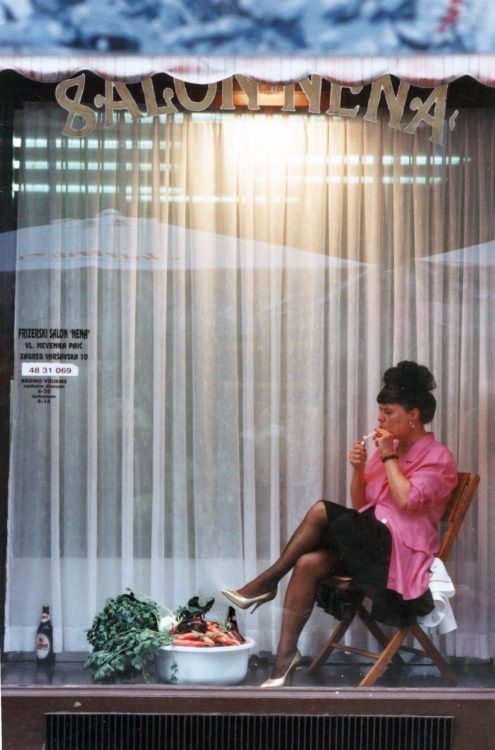 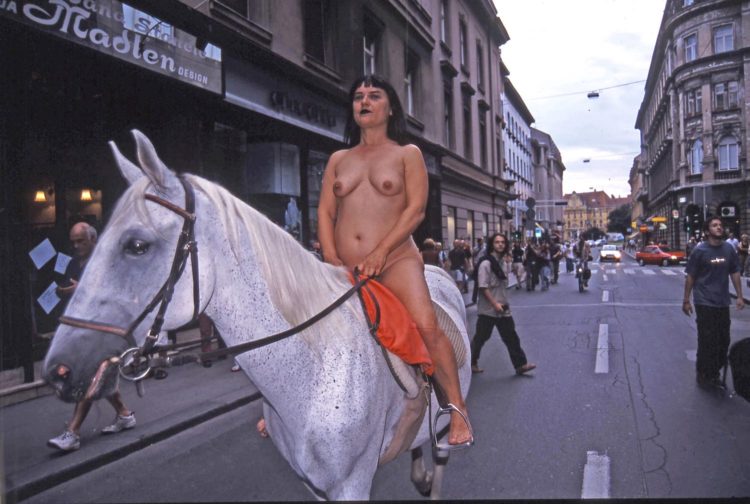 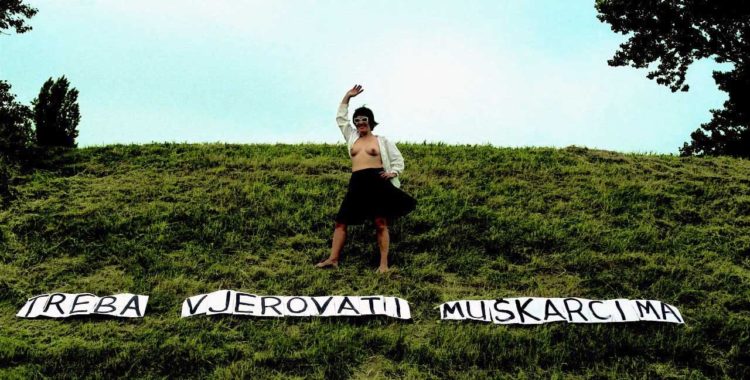 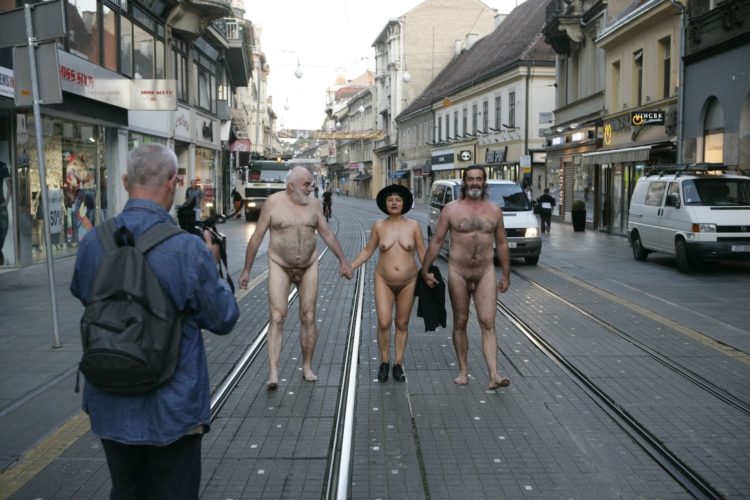 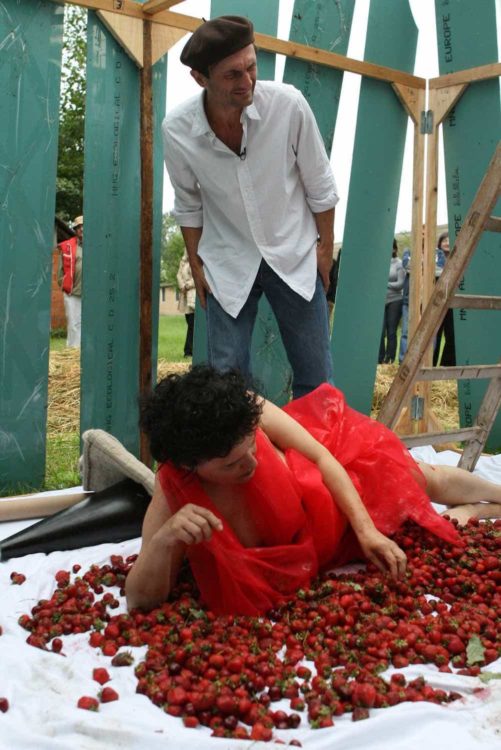 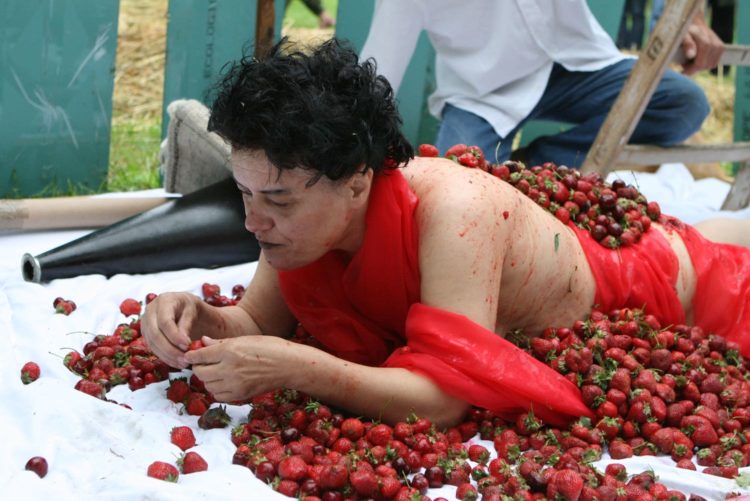 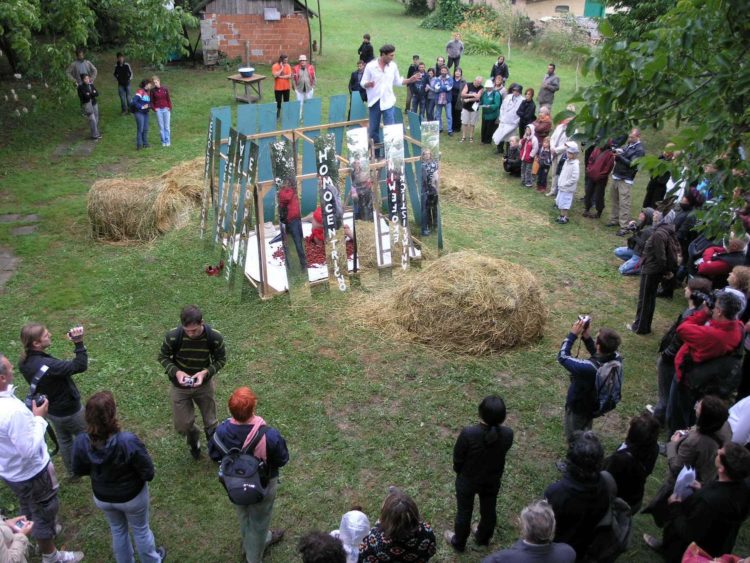 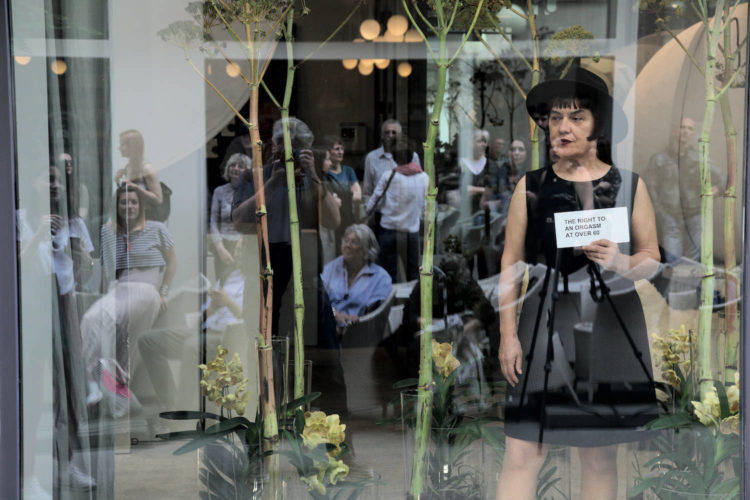 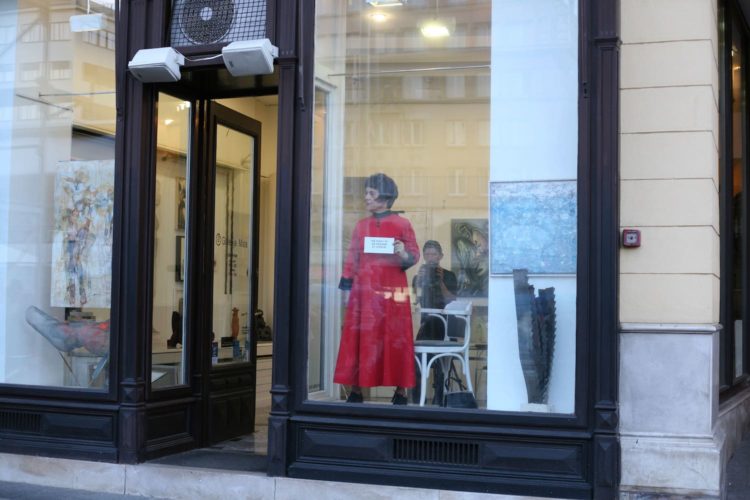 Vlasta Delimar, The Right to Orgasm at over 60, Galerija Mala, Jelačić Square, Zagreb, 2017 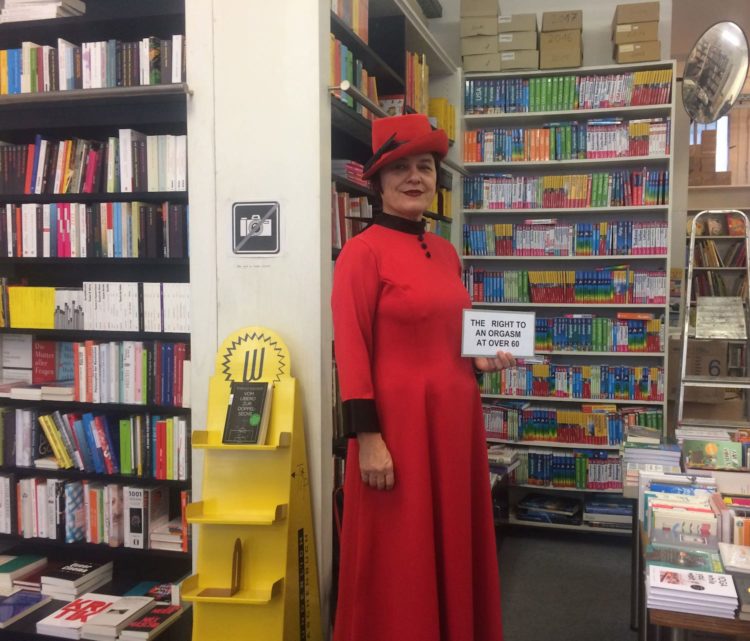