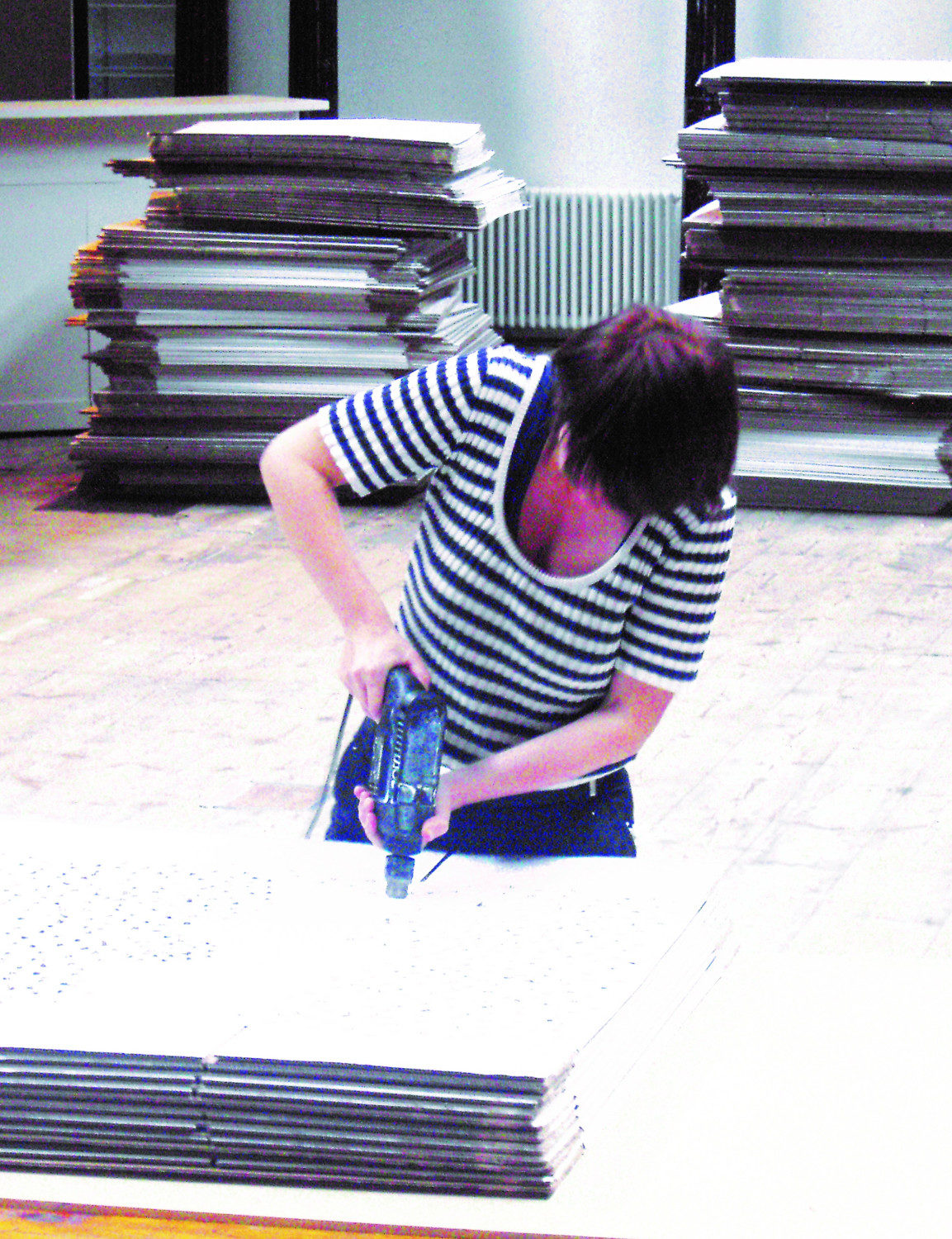 In the series she has been working on for the past twenty years or so, Dominique De Beir has focused her attention on humble and deliberately non-spectacular materials, such as crystal paper, carbon paper, extruded polystyrene and the punched cardboard patterns of embroidery machines. These supports provide the basis for the design, which is usually created using neither graphite nor ink, and employing a range of practices for which the artist exploits mysterious tools that she makes for the occasion, or which she borrows from the medical or culinary worlds, using them to dot, bruise, notch, open or graze her material. They include delicate scalpels, scary surgical knives, steel brushes, thimbles or striking toothed wheels. For certain pieces she uses liquids of different sorts to alter the inert material, whether hot, enveloping, perfumed wax to bathe the paper, oil that infiltrates its way into cardboard, creating a hazy blotch and turning the material opalescent, or spurts of bleach that create a bright, discoloured band across the support. Other designs, of great delicacy, seem to depict gravity-defying locks of hair.

Despite the sometimes surgical operations to which they are subjected, the works reveal a mysterious script, the palimpsest of the treatments they have received, although they do not display the slightest aggression. This new type of Braille, marked by furrows, spots or blisters, and whose surface is worked with coloured materials, looks like a skin whose pores are about to dilate. Although over recent decades Dominique De Beir has delved into different practices – some of which are suggestive of drawing, while others tend more towards installations, in particular with her large punched environments or artist’s books – she calls herself first and foremost a painter. A painter for whom the notion of revelation is ideal, as she always attacks her materials on the reverse, so that the final form only becomes apparent once they are turned over. Her concern, she says, lies in the search for unstable surfaces, bodies at which her interventions hack and fracture.

During the 1990s, Dominique De Beir took an interest in animal fragments, which she placed on tracing paper. Today the representations of bodies have vanished but her works seem to have exactly the same content at heart. With their rubbings, fragility and exposure, they are another image of quivering and sometimes suffering bodies by which we are unable not to be moved.