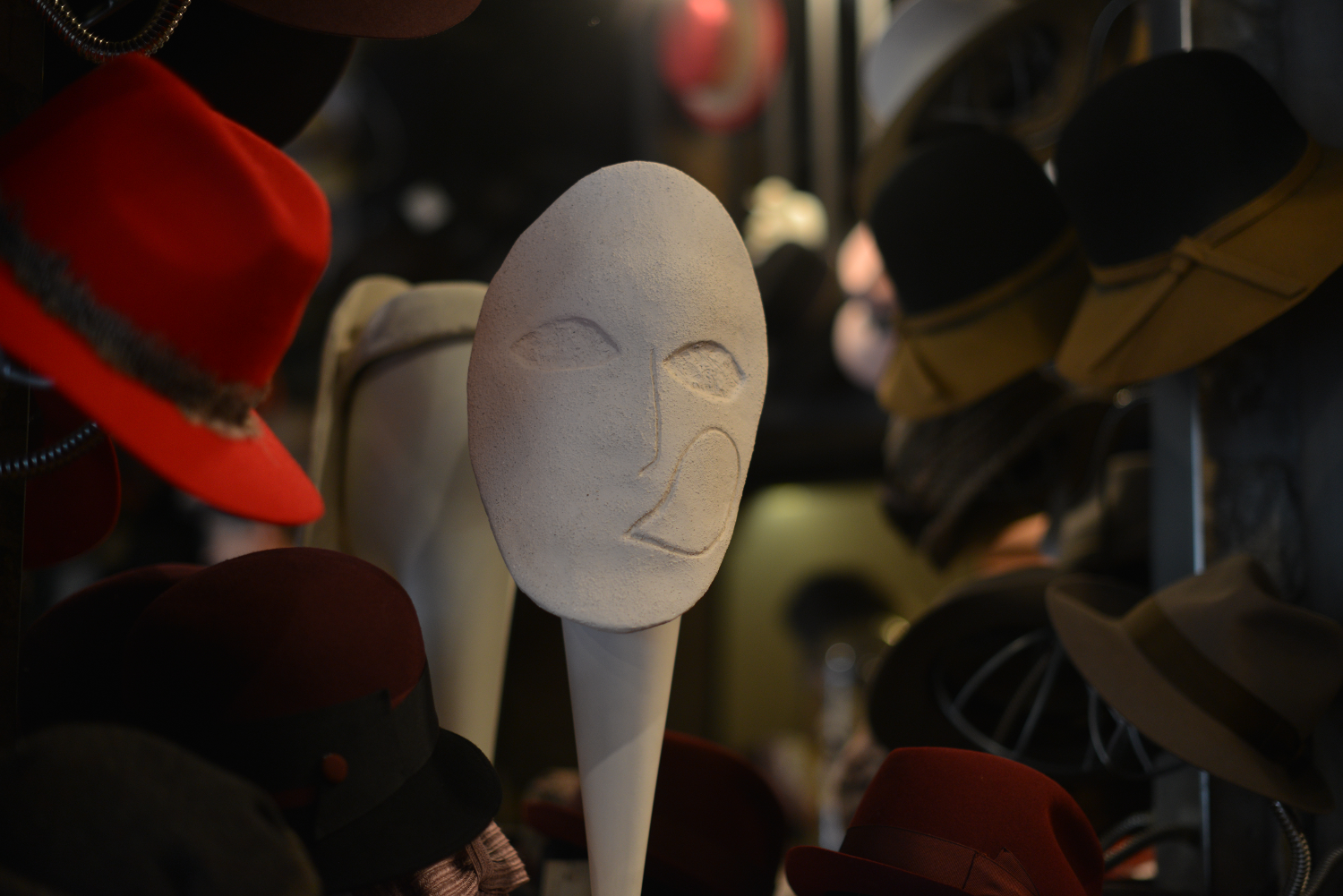 A woman walks towards me.
She stops to pick a bouquet of broom then turns away and walks into a courtyard. At the back, a workshop presents various clay objects. Their forms irresistibly evoke a body, its senses, emotions, nonchalance, and animality. 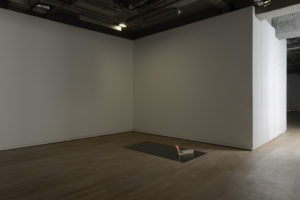 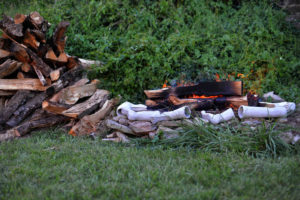 Hélène Bertin does not burden herself with oppositions. Bodies and objects are continuities. The cup may be shaped by the size of her hand, a base will take the form of a human foot, or sculptures painted with khol will become gazes. She once told me or wrote to me that she experiences an attraction for the simplicity of certain materials. Her sculptures, mainly in ceramic, are therefore often bare, without enamel or patina, painting the gentle or brutal gestures that brought them into being and that stem from daily life. Thus a sundial, whose style mimes that of reeds, bears various symbols that preside over the division of a day: the home for rest, an eye open on the world, or the stick symbolising tools. When the air grows humid, the rod bends and adapts the body’s rhythm to that of the atmosphere. 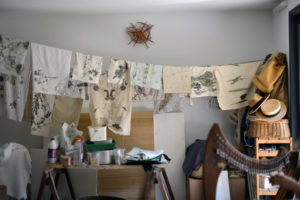 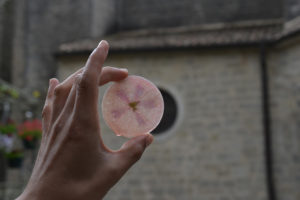 At her workshop in Cucuron, annual events ritualise this attention to creation, to others, and to plants and birds alike: a tinctorial or culinary workshop about lime-wood… Techniques, such as etching or turning, which she teaches and shares, thus also nourish her search for habitual practices. All projects fuel others, connecting the work to the heart, emotion to memory, and word to mouth, as in her writing whose cadence seeks precisely this relation between artwork and intimacy. This is because her forms – whether they are sculptures, research or workshop creations – contain stories. Probing the possibility of an art of habit and a social form of art, Hélène Bertin has discovered figures, positions, or rites that have subsequently accompanied her – Sophie Taeuber, then Valentine Schlegel, and now the May Tree ceremony. Hélène Bertin relates the power of certain gestures: with Sophie, the desire not to create for museum-type spaces; with Valentine, that of constructing useful sculptures; and now, with the tree, the magic of citizen assembly. 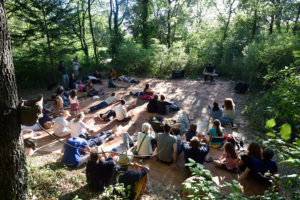 Exhibition view of Ensauvagement, curated by Céline Laforest and Hélène Bertin, concert by Is a fish on a painting by Nina Bernagozzi at the domaine des Tuiles Bleues, 2017, © Photo: Laurence Bertin

From her pocket art deployed in museums, cars, or cafes emerge sculptures that, once exhibited, are able to liberate themselves and that while remaining evolving objects of habit, do not disown their comical and critical power. This is the crux of the paradoxical nature of her work, which focuses on creating “societal emotions”, as she calls them, by way of a hearth, a teapot, a meal, or an exhibition. Hélène Bertin quotes Vinciane Despret in my ear: “Emotion is a moral evaluation, an incarnate thought, and because it is incarnate, because it is interiorised, presents a power and automatism that thought cannot lay claim to.”1 The emotion that Hélène Bertin articulates in the body, her own and that of others, is wrapped up in habit, in the connection between deep intimacy and social life, whose mechanisms she explores.

Hélène Bertin (1989) studied at three institutions with different pedagogical approaches: Lycée Frédéric-Mistral in Avignon in the applied arts section, the École nationale supérieure des beaux-arts de Lyon where she cofounded the Plafond collective, followed by the École nationale supérieure d’arts de Paris-Cergy, graduating in 2013. In the same year, alongside her DNSEP, she started research into the work of Valentine Schlegel that slowly but surely transformed her view of art.
Her practice oscillates between sculpture, workshops, and research, a deliberately hybrid approach that positions her between artist, curator, and historian. She works in Paris and Cucuron where she sends out invitations to work with her guests; Hélène Bertin develops her art in connection with others (artists, associations, artisans, families, etc.). Her sculptures and projects have been presented in alternative spaces (Pauline Perplexe, DOC) and public (CAC Brétigny, château d’Oiron) or private institutions (Fondation Ricard, Lafayette Anticipations).

Commissioner: Céline Poulin Director at CAC-Brétigny since June 2016, Céline Poulin has been developing a program that seeks to turn its artists, theorists, and art lovers into true users of the space. There, she has hosted the French premiers of such artists as Liz Magic Laser, Hélène Bertin, Florian Sumi, and recently Núria Güell. A student of philosophy, Céline Poulin was notably program director of the Parc Saint Léger Hors Les Murs program. She also worked as guest curator, alone and with the collective Le Bureau/, at la Villa du Parc in Annemasse; at the DAZ in Berlin in partnership with the Institut français; at the Box in Bourges; at the Synagogue de Delme; the Casino Luxembourg; at the Klemm’s Gallery in Berlin, among others. She is also a member of IKT and C-E-A.