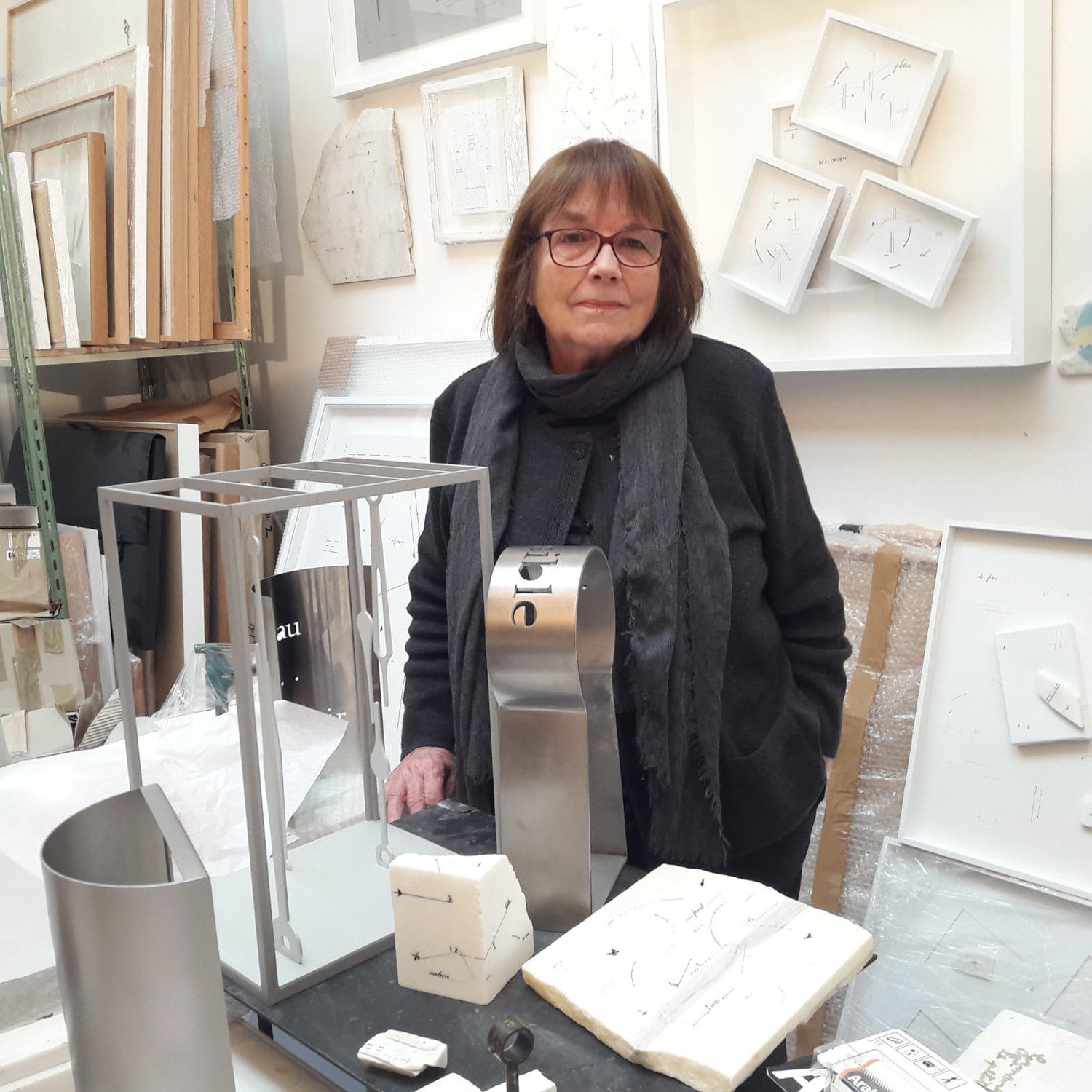 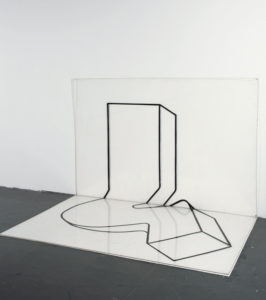 Marie Orensanz (born in 1936) began her career in the 1960s, a time marked by the repression that followed the military junta’s rise to power in Argentina. The climate of revolt that animated cultural and intellectual circles at this time, encouraged major transformations in artistic practices, expressed through the rejection of institutions and traditional techniques. This emergence of an art that Rodrigo Alonso described as “eccentric, but not necessarily marginal” and “undisciplined” was characterised by artists’ moral and civil disobedience, as well as the reconsideration of the formal tools at their disposal.1 Today, art historians agree that women played a fundamental role in this movement, in which one of the key components was the opposition to patriarchal values supported by the ruling regime. The work of women artists established an innovative language that associated political engagement with new ways of artistic expression. 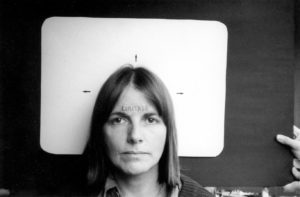 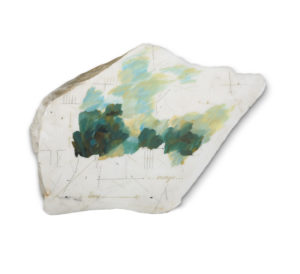 Orensanz discovered the subversive potential of art under the dictatorship of General Juan Carlos Onganía.2 Although she was trained in Buenos Aires by painters such as Emilio Pettoruti (1892-1971) and Antonio Seguí (born in 1934), she has been interested in sculpture since the 1960s when she began experimenting with various materials. Between 1967 and 1969, she realised Estructuras Primarias (Primary structures), a series of abstract works in wood, mirror and Plexiglas. These works show her proximity to Lidy Prati (1921-2008), painter and founding member of the Asociación Arte Concreto-Invención (Concrete-Invention Art Association), as well as her early “indiscipline” defying rules of geometry. Her insubordination took on a more politicised role in 1969, when she presented the installation El Pueblo de La Gallareta (The village of La Gallareta) at Mar del Plata for which she reworked the pamphlet of the workers demonstrating against the suppression of the local railway into posters. The exhibition was censored and shut down the day after the opening. M. Orensanz became aware of the gender stereotypes that hindered an artist’s career when she was told, “We thought you would make flowers”. A few years later she countered that remark with a series of drawings titled Flores Venenosas (Poisonous flowers, 1977) which she exhibited in Buenos Aires. 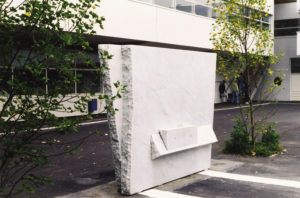 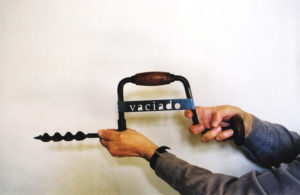 Although the affirmation of femininity was a form of dissidence at the time, many artists in Latin America did not identify with the feminist movement.3 Protesting against gender inequality was often part of the fight against military power and its conservative ideologies. On arriving in Europe, M. Orensanz was confronted with the phallocentric art world when a collector purchased one of her pieces and then decided to return it after learning that the author was a women.4 She then decided to add the letter “e” to her first name to fully assume her career: “If being a feminist means fighting injustices, then yes, I am a feminist.”5 She also asserted the importance of the couple and of motherhood by not separating her family life from her professional life, a position she still defends. 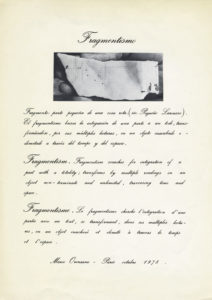 According to M. Orensanz, art “is not and should not only be the vision of one person, the expression of an individual”.6 Communication is central to it. The relationship that she seeks to establish with the onlooker translates her interest in otherness. “Thinking is a revolutionary fact,” she wrote in her manifesto Eros, which was disseminated in Milan in 1974.7 The artist expresses herself through a language composed of words, numbers and symbols, a reduced but polysemic aesthetic vocabulary, through which she seeks to challenge us and provoke “an intellectual or emotional reaction”.8 The frequent use of metaphor enriches the poetic dimension of her creations, making her, according to the art historian Christine Frérot, a “sensitive conceptual artist”.9 Beginning in 1974, she incorporated Carrara marble into her practice, which nourished her second manifesto, Fragmentismo, published in 1978, in which she declared, “Incompleteness is a constant in my work, because I think we are a fragment of everything”.10 As she refused to adopt a solitary and totalising position, her work heralded the arrival of the generation of neoconceptual artists such as Felix Gonzalez-Torres (1957-1996), for whom the spectator is an active participant in the creation of the work’s meaning. 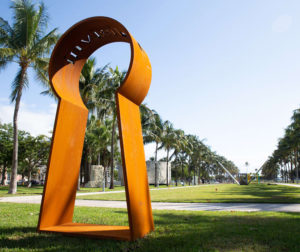 Inert matter becomes the paradoxical support of thought in movement, the tool of transmission between the artist and the public. In her recent monumental pieces in perforated steel, we are invited to walk through the sculpture that has become Invisible (2019) to look through it. A keyhole that opens an infinite world, as in Alice in Wonderland, but also an act of emancipation that retains all of its transgressive power.

Born in Argentina in 1936, Marie Orensanz lives in Montrouge, France. Active in the artistic scene of Buenos Aires during the 1960s, she participated in exhibitions organised by the Instituto Torcuato Di Tella before moving to Milan in 1973. The proximity to the Carrara marble quarries gave way to her first stone productions. In 1975, Marie Orensanz moved to Paris. Written in 1978, her Manifesto of Fragmentism, presented the conceptual basis of her work. Her creations are present in various private and public collections in France and abroad: the Musée national d’art moderne – Centre Georges Pompidou (Paris, France), the Fonds national d’art contemporain (France), the Bremen Museum (Germany), the Centrum für Kunst (Vaduz, Liechtenstein), the Jorge Perez Collection (Miami, USA), the Museo de Arte Contemporáneo de Rosario (Argentina), the Museo de Arte Modern (Buenos Aires, Argentina), and the Museo Nacional de Bellas Artes (Buenos Aires, Argentina). She has realised several monumental sculptures for both private and public spaces in Argentina, Mexico, the United States, France and Switzerland. In 2009, she participated in the group exhibition elles@centrepompidou  at the Centre Georges Pompidou (Paris, France). In 2010, the Maison de l’Amérique Latine (Paris, France) presented her first important exhibition in France. She is represented by the School Gallery in Paris.