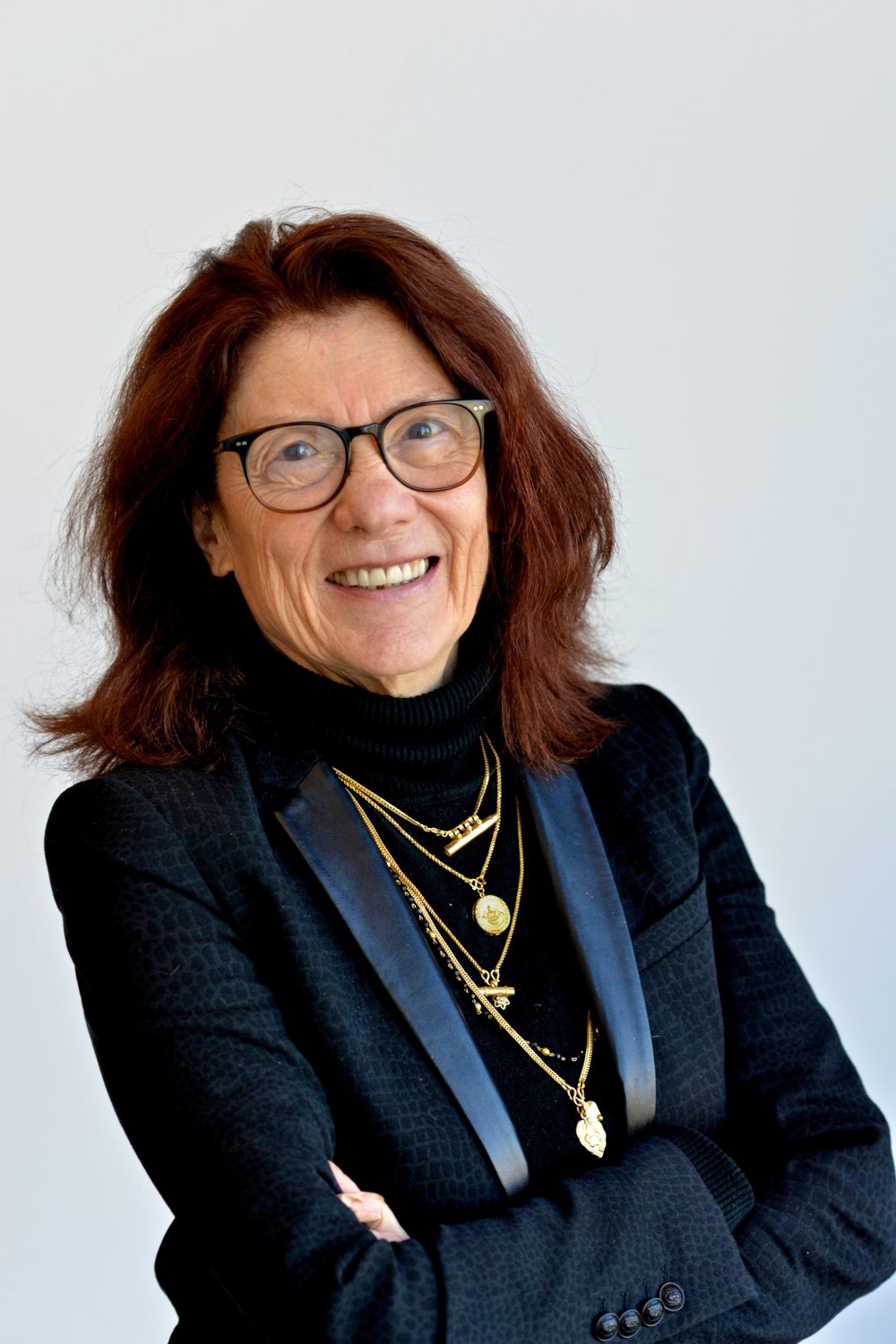 1968: Tania Mouraud burned her paintings in public in the courtyard of Villejuif hospital, thus inaugurating a quest for artistic, technical, and intellectual emancipation with which she has never ceased to experiment, from the conception of her initiation and meditation rooms to her more recent pieces. There is, however, a consistent pattern in her work, which continuously questions the primordial paradoxes at work in life: order and chaos, plenitude and fury, serenity and terror, creation and loss. 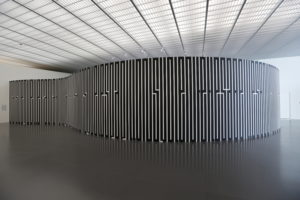 1969 saw her inaugurating a cycle on meditation chambers and initiation rooms: thirteen environment projects, six of which were built. Her aspiration for an environmental art, then relatively new on the European scene, manifested a philosophical reflexion on our identity and relationship to the world – the quest for “a little more space for a little more soul.1” Some of the rooms also feature sound designs that led to creations or collaborations with contemporary composers.

As from 1972, Tania Mouraud continued her research on “the act of seeing” by exhibiting large words written on construction sheeting. This economical and “anti-aesthetic” form of medium enabled her to work on a monumental scale, renewing her approach of the notion of environment. City Performance #1 (1977-1978), now considered a classic work of art of the 1970s, experiments with this research on a citywide scale by reproducing the word “NI” on fifty-four 4 x 3 metre billboards in Eastern Paris. She pursued this research as from 1988 with her series Words, Black Power, Black Continent, and Wall Paintings. Tania Mouraud returned to painting to explore the plastic potential of lettering and language, first by reversing habitual reading processes (positive-negative), then by stretching out words to the full height of the walls, making them almost illegible in the process. 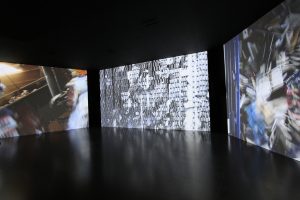 At the turn of the 2000s, Tania Mouraud used video to tackle the subject of history and its silences, and the atrocity of any form of alienation or destruction. However, she chose not to add any depiction of disaster to the dreadful flow of pictures we are exposed to, the overabundance of which lessens our capacity to react. Instead, she preferred to summon the power of evocation, the physical dimension of her video environments and of the sounds she composed, and their capacity to generate a form of shock. The question of the mechanical and organised disappearance of life is a significant part of her work, the evolution of which is visible in her works Sightseeing (2002) and its evocation of the Holocaust; Once upon a Time (2011-2012) and its powerful images of felling machines in Canadian and French forests; and La Fabrique (2006), which addresses the issue of the alienation of bodies at work.

Tania Mouraud chose her path and voice early on in her career: “One must be a soldier[1]” and conquer the right to be an artist without restrictions or determination of any kind. Her feminism expresses itself through her actions: leaving the sphere of intimacy and taking possession of the symbolic realm, starting with its first tool of power: language. Tania Mouraud has ever since pursued a permanent insurrection in the face of domination by favouring action over declarations: she works on an environmental scale, taking over the public space, questioning and deconstructing authoritarian regimes and history.

Tania Mouraud (1942, France) is an unclassifiable artist of the French art scene who has never ceased to reinvent her practice since the late 1960s through the use of a variety of mediums. Her artistic career is interspersed with many solo and group exhibitions in France, particularly at the Saint-Étienne Métropole Museum of modern and contemporary art (2014), at MAC VAL in Vitry-sur-Seine (2014), at the Museum of Fine Arts in Nantes (2009), and at the Musée de la Chasse et de la Nature (2008); and abroad, at the Slought Foundation (Philadelphia), California State University, and Fullerton Grand Central Art Center (Los Angeles). The first major retrospective of her work was held at Centre Pompidou-Metz in 2015.

Commissioner: Hélène Guenin, director of the MAMAC in Nice