Hemali Bhuta, or the Exhibition as an Open-Air Landscape 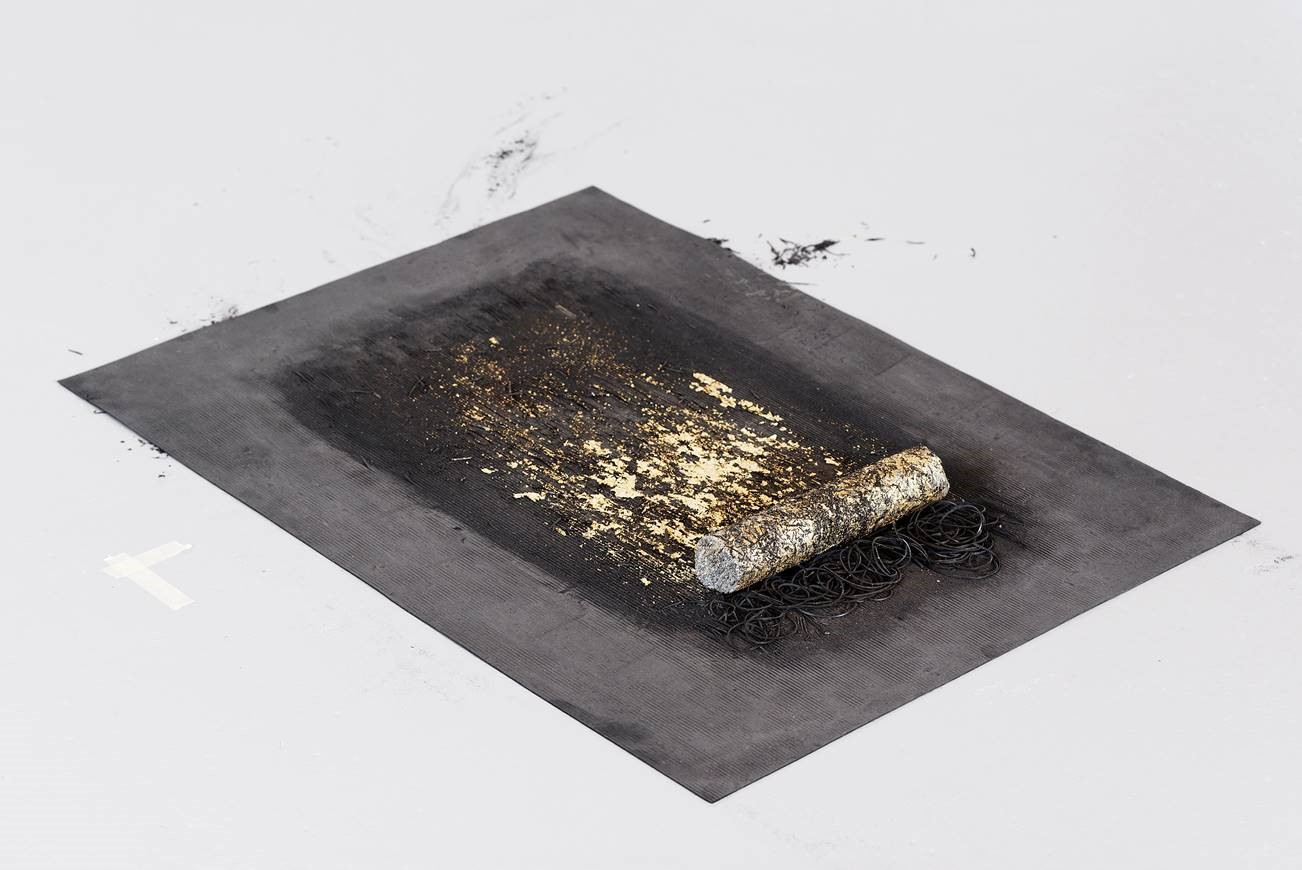 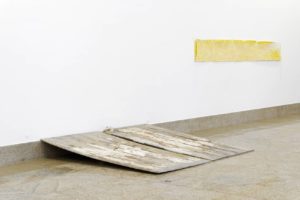 The double title refers to a duality and conjunction of landscapes and geologies between the northeast of Indian where the Subarnarekha River flows towards the Bay of Bengal,3 which was a gold-bearing exploitation area, and this Limousin region, also known for its gold-extraction activity and in which the island and lake of Vassivière were artificially created. Bhuta thus interconnects mineral and aqueous bodies in these new artworks. The minimalist installations and modest sculptures presented are made of reworked, recycled, collected, reused, remodelled, displaced, or metamorphosised elements, which are then associated, combined, or superimposed. The artworks are dotted around the space, from the lighthouse to the little theatre, representing a pathway of moments of stasis, cross-references, and citations, within the monumental corpus of the post-modern building designed by Aldo Rossi and Xavier Fabre. The sculptures are distributed across the floor (Encounters with Gold, 2017; From the Pile, 2017), hung on the walls creating a floating effect (Cut Piece Corner, 2017), fragmented in an almost pictorial visual composition, or brought together in miniature form under glass museum display cases (Maquette for “The Fold” & Maquette for “80 Cuts”, 2017). They are thus confronted spatially, entering into conversation or contrasting with one another, and sometimes represent the memory of one with respect to another. 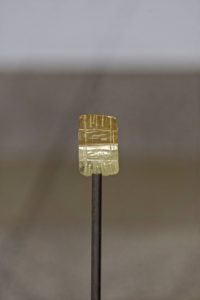 These works by Bhuta, specific to the Limousin site, to its landscaped and environmental lines, its human or industrial activities (paper manufacturing, jewellery), and its exposed substrata (gold extraction and the gneiss stone quarries) were devised during a short artist’s residency, last autumn, on Vassivière island. They bear the marks and forms of a history that is as biographical as it is anthropological and geological, bearing witness to a symbolic and ceremonial nostalgia, that of a moment of encounter and interaction. Bhuta plumbs the depths and brings a subterranean landscape and history to the surface, which she relates to another history, to other geologies and archaeologies, other everyday rituals and practices: those of her native country, from her life and work. She had already provided glimpses of these in her previous exhibitions (The Hangover of Agarlum, 2010; Point-Shift and Quoted Objects, 2012-2013; Measure of a Foot, 2016), held at the Project 88 art centre (Mumbai), with the ordinary, worn materials used in all activities of communal and traditional Indian life. They are all forms, residues, and reappropriated materials that the artist opens up to the spectators’ probing gaze – modest and sometimes ephemeral substances (soap, beeswax, stone dust, graphite, alum, paper), or that subvert any imposing notion of form, or whose symbolic value (gold) is alienated and inversed by sculptures in miniature format. 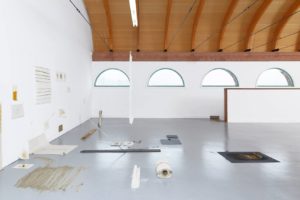 From Mumbai to Vassivière, Bhuta presents this golden line within a relationship of duality and acknowledgement – a rapport that seems only natural for this artist, who maintains a physical, carnal, deeply tactile, and spiritual connection with the materiality of landscapes and the rhythms of daily life and for whom the work of art is geological, involving excavation, measurement, and metamorphosis. Bhuta extracts, dissects, covers over, hammers, sets down, rubs, folds, and refolds, until she has attained the dust of things, down to a state of detritus, down to the infinitely small. As though in the open air, the Vassivière exhibition reconnects dualities, archaeologies, and layers that are always underground and intimate, which, in their telling, give rise to the work’s visceral self-reflexivity.

1
Hemali Bhuta is the cofounder of the CONA Foundation along with Shreyas Karle, which she also directs. The CONA Foundation is an art organisation located in the north of Mumbai. It hosts artist’s residencies, organises debates, screening and conferences, and produces a considerable amount of publications.
2
Hemali Bhuta has participated in collective exhibitions in the United States and in Europe, notably the events Indian Highway IV (2011), at the Musée d’Art Contemporain de Lyon, and Indian Highway V (2011-2012), at the MAXXI – Museo Nazionale delle Arti del XXI Secolo, in Rome. In 2010, she participated in the exchange program of the École National Supérieure des Beaux-Arts de Paris.
3
In the title of her exhibition, Hemali Bhuta also made reference to the film by Bengali director Ritwik Ghatak Subarnarekha (shot in 1962 and released in 1965), about the life of refugees from West Bengal after the division of India in 1947.

How to cite this article:
Marjorie Micucci, "Hemali Bhuta, or the Exhibition as an Open-Air Landscape." In Archives of Women Artists, Research and Exhibitions magazine, . URL : https://awarewomenartists.com/en/magazine/hemali-bhuta-lexposition-paysage-a-ciel-ouvert/. Accessed 15 May 2021