The first solo exhibition of Otobong Nkanga (born in 1974 in Nigeria) held in the United States bears witness to this artist’s ability to infuse the most serious of scenes with salutary poetics.

All of the works selected, which include a number of drawings, tapestries, and installations, all created between 2005 and 2018, are deployed within a single vast gallery of the Chicago Museum of Contemporary Art, presenting a kind of constellation of stories within which the public can freely circulate. Each of these stories takes a singular look at the traumatisms inflicted by colonisation on territories and bodies. This exhibition explores the transformation of landscapes, whose origins are often deeply buried beneath layers of history, and the connections that join Africa and the West. By introducing this through a performance based on the installation Solid Maneuvers (2015), an examination of the devastating effects of copper extraction in Namibia by the Germans in the early 20th century, O. Nkanga places her body and personal experience at the heart of this exploration. 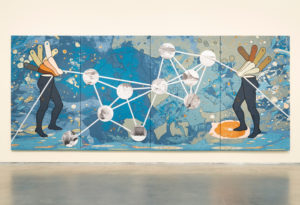 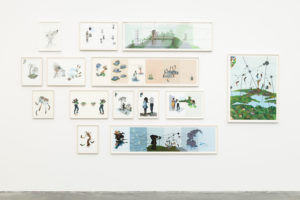 In The Weight of Scars (2015), a monumental tapestry displayed at the entrance of the gallery, two headless silhouettes manipulate ropes that tie together photographs of abandoned mines in Namibia, evoking the mechanisation of the human body at work in the chains of production inherent to the capitalist system and the dehumanisation that results from it. By representing networks of scars, O. Nkanga establishes an historical and affective cartography of the African continent, as though to well up the wounds of oblivion. Her lived experience and memory are often the primary sources used in this enterprise, as we can see in the series of drawings Filtered Memories (2009-2010) and Social Consequences (2009-2010), in which reconstructions of childhood memories and representations of scenes of violence pertaining to Nigeria’s past are intertwined. 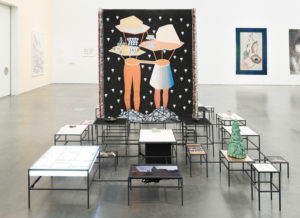 Her long-term fascination for dazzling minerals has also led her to focus on the transformation of mica in the now-iconic installation In Pursuit of Bling (2014). By associating tapestries, samples of mica, and archival documents and videos retracing the phases of its alteration through to its presence in numerous utilitarian products, such as
make-up, O. Nkanga reveals and dissects the human passion for “all that glitters” and the terrestrial sacrifices it leads to. For the artist, this is a way of digging up the invisible roots that underpin the metamorphoses of our environments and of presenting the ‘active hand’, as is demonstrated in the triptych AlterScape Stories: Uprooting the Past (2006), in which we glimpse a silhouette that, while dominating a landscape, manipulates its elements at will. 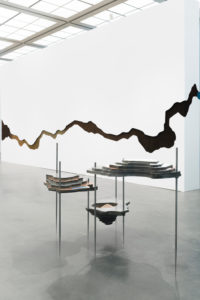 The in situ work Anamnesis (2016 – in progress) eloquently reworks the theme of unveiling. It comprises a wall with a crack in the form of a river running through it, allowing spices, coffee, tea, tobacco and cocoa to show through – goods commonly imported to Chicago. The odours that emanate from the spices invade the gallery space and convoke the bodies of the audience, inviting them not to merely contemplate what is found at the heart of the structures around them, but also to question their own interaction with them. Through an exploration of the memory of places and corporeal experiences, O. Nkanga appears to be telling us that it is possible to dig down to the heart of what appears buried and to reconstitute the story, in order to correct it in the present.

Otobong Nkanga: To Dig a Hole that Collapses Again, from 31 March to 2 September 2018, at the Museum of Contemporary Art (Chicago, United States).