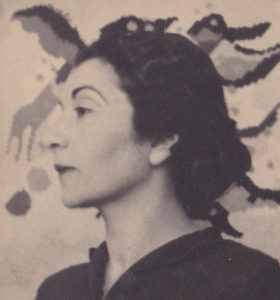 To the present day, every biography written about Amy Nimr contains major omissions and contradictions. Even her year of birth was never clearly established: while her official papers make it 1907, it seems that she was in fact born on 9 August 1898 in Cairo. Her parents, Ellen Eynaud, who came from a British, French, and Austrian background, and Faris Nimr, an influential Levantine pressman who had converted to Protestantism and settled in Egypt in the early 1880s, lived in Maadi, an upper-class district of Cairo. A. Nimr grew up in a westernised intellectual and political environment. From a very young age, she shared her time among Egypt, France, and England. She attended Cheltenham Ladies’ College, furthered her education at the Slade School of Fine Art in London (1916–1920), and took classes at the workshop of post-impressionist painter Walter Sickert.
A. Nimr first showed her work to the public in Paris, at the Salon d’automne of 1925, and had her first solo exhibition at the Bernheim-Jeune Gallery in 1926. The very official Salon du Caire exhibited her work on several occasions, contributing to her fame in Egypt from the early 1930s. She especially caught the attention of Mahmoud Saïd, one of the leading figures of modern painting, and writer Ahmed Rassim, who wrote a short book about her. From then on, A. Nimr exhibited in London, at the Warren Gallery (circa 1930), in Paris, at the Vignon Gallery (1931), and in Cairo, at the Kasr al-Doubarah Gallery (1935).

Her early paintings show groups of slender-bodied figures – bathers and fishermen, religious scenes and depictions of the Jewish community. Later on, A. Nimr’s style asserted its kinship with Michelangelo’s painting, which she admired for its sculptural nature. On the occasion of her travels to Upper Egypt, she painted a series of Nubian heads, portraits of Bedouins, and equestrian scenes that demonstrated her research on volume through the use of chiaroscuro, which was also visible in her still lifes of fruit.

The 1930s marked her introduction to Surrealism. First in London, where she exhibited at the Wertheim Gallery alongside Barbara Hepworth and Robert Medley, then in Paris, where she occupied a studio at the Villa Seurat, making friends with many of the residents, among them Henry Miller. In Cairo, she became a member of Art and Liberty (1938–1948), a group of artists and intellectuals convinced that Surrealism would be the answer to the rise of nationalism – the first warnings sign of World War II. During the war, A. Nimr would remain on Egyptian soil. As the wife of diplomat Sir Walter Smart, she entertained Cairo’s cosmopolitan and polyglot intelligentsia and provided financial support for artists such as Lawrence Durrell. Unfortunately, history and writings have focused mainly on one dramatic event: during a picnic in the Saqqara desert in 1943, the couple’s only son Micky was killed by a landmine. When A. Nimr finally took up painting again, she produced some of the darkest pictures of her surrealist period – skeletons and monstrous bodies sinking into the abyss.

In the aftermath of the Suez Crisis and following the withdrawal of British troops in 1956, A. Nimr and her husband were forced to flee Egypt. Although she had attempted abstraction several times over the course of the previous decades, from the 1950s her painting became exclusively abstract, perhaps reflecting the difficulty of representing the painful events in her life. Her last known exhibition was held at the Galerie de Marignan in Paris in 1961. The catalogue’s text, penned by L. Durrell, mentions a texture worked “in harshly-coloured gravel, sand, and stone”. A. Nimr died in Paris on 24 January 1974.

The author wishes to thank Nadia von Maltzahn for her precious insight into several aspects of the artist’s life. 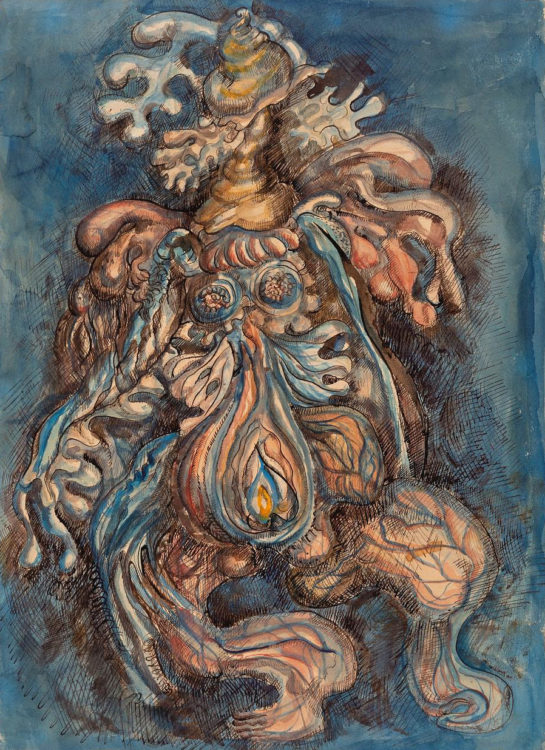 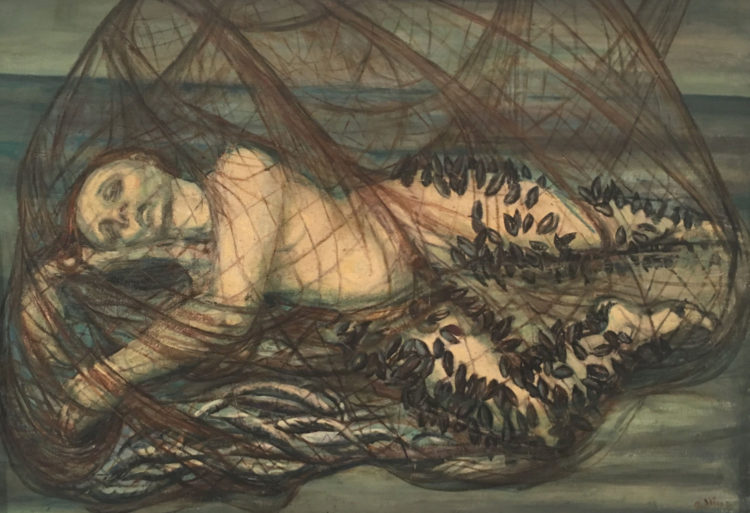 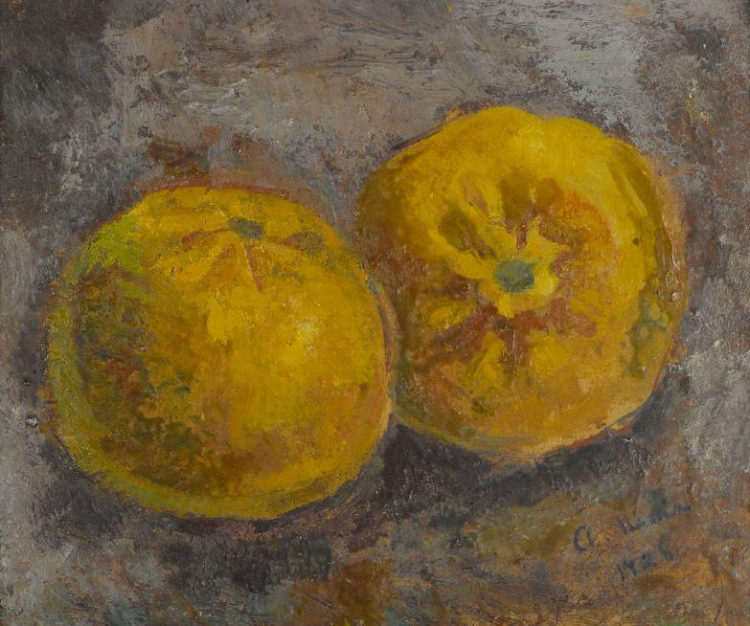 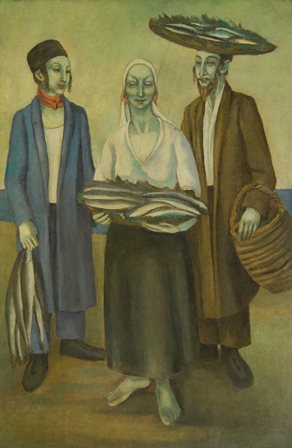 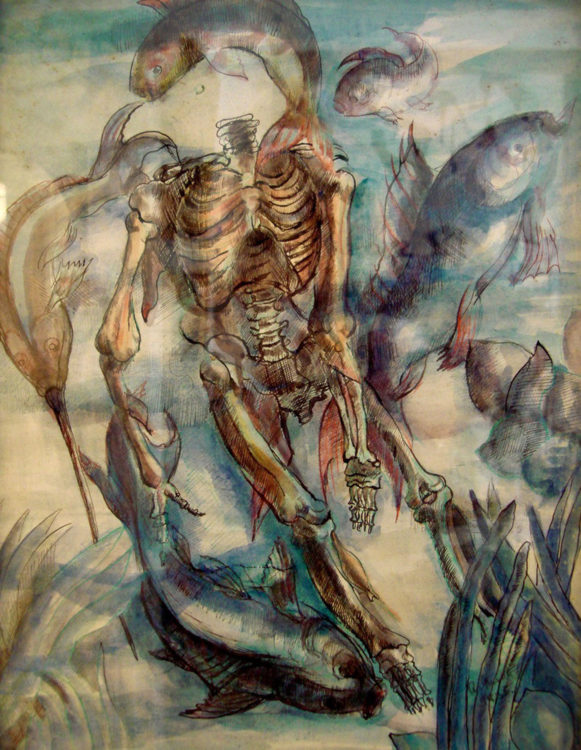 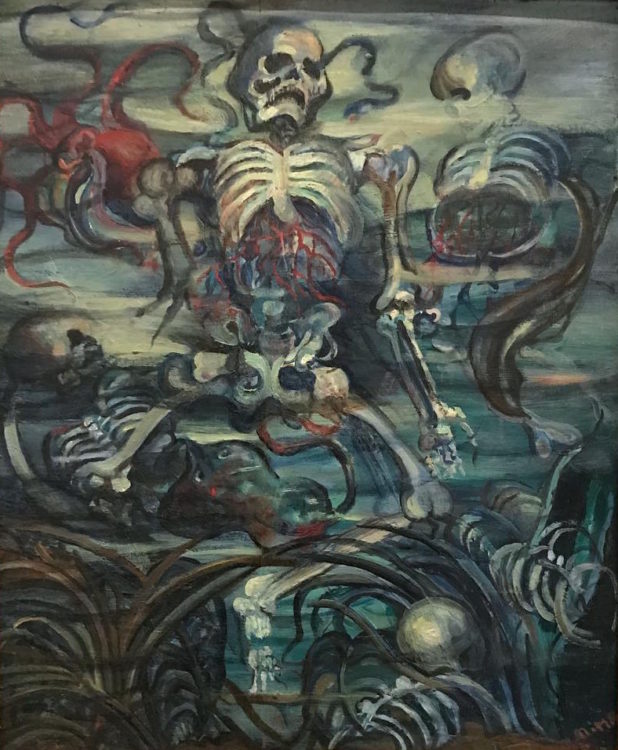