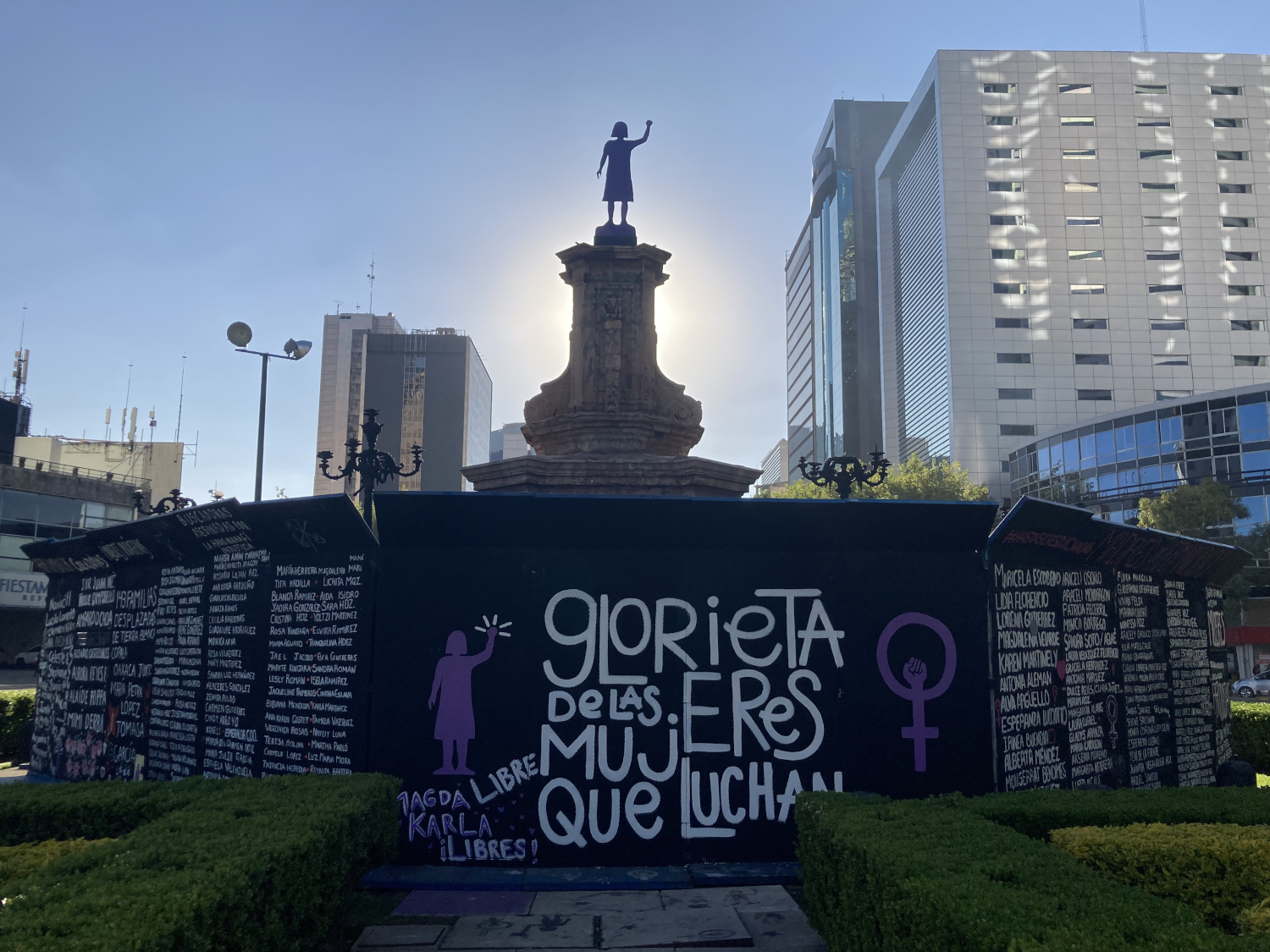 On 25 September 2021, feminist activists ascended the empty plinth once occupied by a monument dedicated to Christopher Columbus along the busy avenue Paseo de la Reforma in Mexico City. The figure of Columbus lifting a veil from a globe to “reveal” the Americas, surrounded by colonial-era Dominican and Franciscan friars, had been in place since 1877, commissioned by wealthy industrialist Antonio Escandón.1 The monument formed part of an ongoing national project, begun during the short-lived rule of Emperor Maximillian I and extended through the Porfiriato, to “modernise” the capital, which resulted in the construction of wide boulevards that would rival those of Paris and be filled with monumental public art.

In the coming decades more monuments and statues dedicated to national heroes were installed along Paseo de la Reforma, both on its large roundabouts and alongside it. All of these figures were men, save for two: the Angel of Independence, dedicated to the centennial celebration of Mexico’s independence from Spain in 1910, and the Diana the Huntress Fountain installed in 1942 at the roundabout nearest Chapultepec Park. The largest physical representation of a woman in a monument stands adjacent to Paseo de la Reforma: Monumento a la Madre [The Mother’s Monument] was officially revealed to the public on Mother’s Day in 1949 and features a towering indigenous Madonna and Child standing above a plaque that reads “To the one who loved us before we met”. While the monument was destroyed in the devastating earthquake that rocked Mexico City in 2017, it was restored according to its original form just one year later. For over a century, the only acknowledgement of women in monumental public art in Mexico City came in the form of a nude mythic being, an angelic allegorical figure of the nation, or the idealised, self-sacrificing mother. This all changed with recent anti-monumental feminist interventions in public space.2

The Columbus statue group had long been the target of protests in the city and was removed for restoration in 2020, just days prior to a planned demonstration to mark Día de la Raza, held on the date of Columbus’s arrival in the Americas, in which protestors called for its destruction. Officials planned to replace it with a monument dedicated to Indigenous women and in September 2021 announced that the artist Pedro Reyes (b. 1972) was selected for the project. Reyes’s approach to representing an Indigenous woman in his sculpture, titled Tlalli (which means “earth” in Nahuatl), drew from Olmec depictions of what are thought to be male rulers. A debate ensued regarding multiple aspects of the project, notably the choice of a mestizo male artist to lead the commission, which resulted in it being cancelled.3

In the midst of the controversy surrounding the monument’s replacement, feminist activists climbed the barrier surrounding the empty plinth and installed a purple wooden representation of a woman with a raised fist and a cry of “JUSTICIA” on her back, an action they named Antimonumenta-Justicia (fig. 1).4 Working with the families of victims of femicide and disappearance, they painted names of murdered and missing women around the white protective barriers and rededicated the space as la Glorieta de las Mujeres que Luchan [Roundabout of the Women Who Fight]. Within hours authorities had painted over the names, but the group returned to repaint them several times, visibly asserting their control of the space. Since this initial intervention, the roundabout has become a site of memory for victims and ongoing protests for justice (fig. 2). 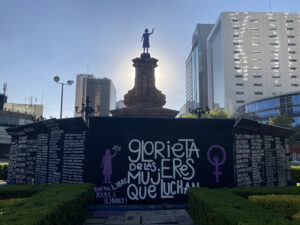 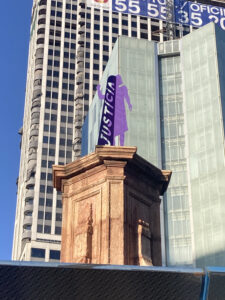 This intervention is linked to the ever-increasing crisis of gender-based violence in Mexico. Recent studies estimate that 70 per cent of women and girls over the age of 15 have experienced sexual violence.5 The femicide rate in the country has nearly doubled since 2015, with ten women murdered every day.6 This staggering fact was made highly visible in two notable interventions on Día Internacional de la Mujer [International Women’s Day], the first being an action undertaken by the same activist group responsible for Antimonumenta-Justicia, who in 2019 installed a purple feminist symbol with current femicide statistics written on it in front of the Palacio de Bellas Artes, in an intervention titled Antimonumenta-vivas nos queremos (fig. 3). The second was enacted in 2022 by the feminist collective Fuimos Todas, who flew a blimp bearing the statistic of daily femicides on its side over the city (fig. 4). The increased brutality of the murders of women and girls, and the systemic impunity that surrounds them, has contributed to a recent groundswell in feminist activism. Since 2019 thousands have gathered in massive public demonstrations to denounce the current situation facing Mexico and demand systemic change. These demonstrators have strategically used public monuments along Paseo de la Reforma as means to draw attention to the cause and to the deep connections between the crisis of violence, patriarchal constructions of gender, and mythologies of the nation state. 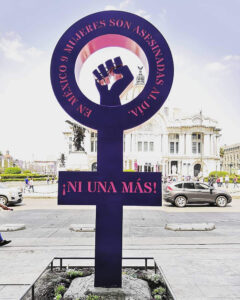 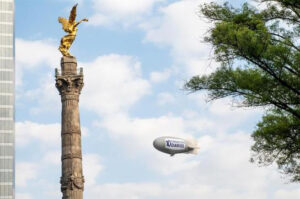 In August 2019 feminist collectives and activists famously covered Paseo de la Reforma’s Angel of Independence with graffiti denouncing the state’s complicity in the culture of violence against women, the most prominent declaring “México Feminicida” [Mexico is Femicide](fig. 5). Rather than responding to the demands of protestors, government officials condemned their actions as vandalism, and worked to protect the space from further “damage” by erecting a plywood barrier and planning for it to be cleaned. As Marina M. Álvarez argues, this situation exemplifies the fact that “the state has taken more action to preserve and defend landmarks and public spaces in Mexico than it has to acknowledge staggering accounts of gender-based violence”.7 In response, a collective made up of artists, architects, historians and conservation specialists, known as Restauradoras con Glitter [Restorers with Glitter], petitioned the government to document the graffiti messages rather than erase them, arguing they are now part of the official history of the monument itself.8 Months later, for International Women’s Day 2020, feminist activists turned the water in the Diana the Huntress Fountain red to call attention to violence and femicide (fig. 6). 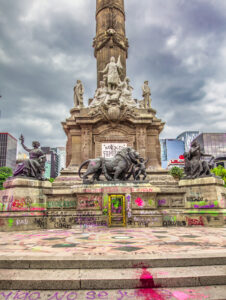 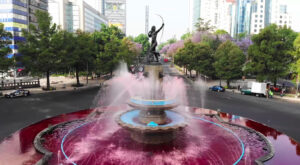 While the interventions undertaken since 2019 have made headlines at home and abroad, they are not without historic precedent. The tactic of visibly reclaiming public monuments can be traced back to actions taken by those involved in the local women’s movement during the early 1970s. Most notably, the demonstration La Protesta Contra el Mito de la Madre [Protest Against the Myth of the Mother], organised by Mujeres en Acción Solidaria [MAS, Women in Solidarity Action], in 1971 used the Monumento a la Madre as a space to interrogate the performative construction of motherhood and open it to collective transformations. Groups continued to utilise this monument to organise around the goals of the women’s movement, and as part of advocacy for “voluntary motherhood”, a term that encompassed access to sex education, inexpensive contraceptives, the right to an abortion and the rejection of forced sterilization (fig. 7).9 In 1991 activists were successful in adding an addendum to the original plaque on the monument that read: “Because her motherhood was voluntary.”10 Other women-led groups have helped to transform this monumental representation of maternal care as a space to denounce the lack of care by the state and seek justice for the disappeared since the early 1970s. 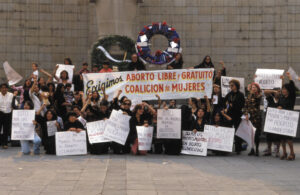 The intergenerational aspect of these actions on monuments was made further visible on 5 March 2022. Days before the mass International Women’s Day protests, feminist groups held an event where they replaced Antimonumenta-Justicia’s original wooden sculpture with a 2-metre steel version and inaugurated the Jardín de la Memoria [Garden of Memory], which features fixed panels with information regarding disappearance, femicide and sexual violence. The space was also surrounded by El tendedero de denuncias y protestas [The Clothesline of Denunciations and Protests], a version of a project originally known as El tendedero [The Clothesline] created by the artist Mónica Mayer (b. 1954). Mayer first presented this work in 1978, a clothesline full of reflections on sexual harassment provided by women who answered the artist’s question regarding what they hated most about living in the city. The project has been repeated several times over the past 40 years, by M. Mayer and other groups, with each iteration asking different questions of the public. For the version surrounding the Glorieta de las Mujeres que Luchan, participants were asked why they had not reported a sexual assault (fig. 8). 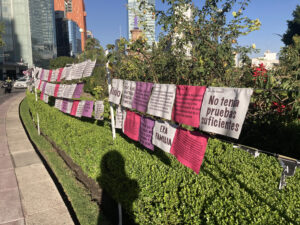 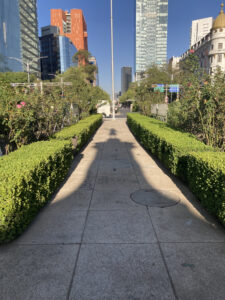 As Ayahuitl Estrada, a founder of Restauradoras con Glitter, stated, “The feminist movement has managed to transform national symbols and monuments into something entirely different”.11 These methods of collaborative intervention onto and resignification of the nation’s most highly visible monuments attests that these issues can no longer be denied or ignored by the general public or the state. In doing so, feminists have also transformed monuments that once functioned to control national narratives and cultural memory into what María Laura Rosa names as “a space for demands and collective struggles, and as a laboratory for creative experiences that fortify these struggles”.12 Functioning as a tool of feminist consciousness-raising, these interventions disrupt the very meaning of monuments themselves, destabilising their existence as singular, static narratives and opening them up as fluid, multivocal and participatory spaces. While the fate of Antimonumenta-Justicia remains undecided, feminist monumental interventions have altered the landscape of Mexico City to forever reflect its legacies of feminist resistance (fig. 9).

Erin L. McCutcheon is an art historian whose research and writing focus on modern and contemporary Latin American art, feminist artistic practices, and their connections with activist histories. She earned a PhD in Art History and Latin American Studies and a certificate in Gender and Sexuality Studies from Tulane University. She is currently an Assistant Professor of Arts of the Americas at the University of Rhode Island and is working on a book project that examines the intersections between art, the women’s movement, and motherhood in post–1968 Mexico City.