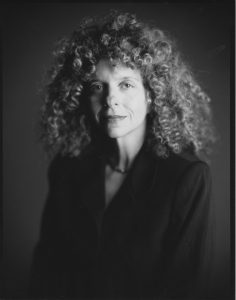 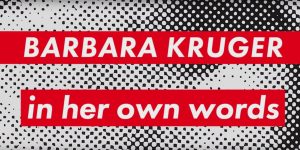 Barbara Kruger: in her own words by the National Gallery of Art
Sound archive
→ Oral history: interview with Barbara Kruger, 2016 May 9 | Smithsonian, Archives of American Art

Barbara Kruger was born to a middle class family in New Jersey. She began her studies in 1965 at the Parsons School of Design in New York, where she was influenced by the photography of Diane Arbus and by the work Marvin Israel, a graphic designer at Harper’s Bazaar. She worked for an advertising agency, then for the New York fashion magazine Mademoiselle, run by Condé Nast (who also publishes Vogue), where she learnt the protocols behind the construction of pictures of mass communication, and especially how to operate framings with the best visual impact to catch the eye—techniques she would later use in her first works as an artist in 1969. This work consists in enlarging advertising images taken from magazines, applying them to large banners, and adding a slogan explicitly directed at the public and questioning white male authority and the stereotypes spread by the media. Her photomontages, limited to three colours (red, black, and white), evoke revolutionary agitprop or the collages of John Heartfield, Raoul Hausmann, and Hannah Höch. Her first significant exhibition was held in 1979 at the P.S. 1 contemporary art centre in New York. Her collages highlight some of the semantic relations present within the image through the use of political messages coupled with an instantly recognisable visual identity. The aggressiveness of the colours and layouts heighten the brutality of the visual codes, evoking the surveillance strategies of our societies.

Since the 80s, the artist’s series combine words and images more closely, and address the themes of violence, power and sexuality rampant in the media. Hijacking the conservative rhetoric of the Reagan years—during which the works were created—her montages use photographs from the 1940s and 1950s to address the painful subject of AIDS and reaffirm contraceptive and abortion rights. Her slogan “Your body is a battleground” takes the opposing view of anti-abortion campaigns in the United States. Other works, influenced by the writings of contemporary French theoreticians, which the artist discovered in the film review Screen, address the subject of consumer society and its manifestations. They borrow their circulation methods from advertising: public and institutional spaces, billboards, mural installations, objects, books, or shopping bags. Her 1987 catchphrase “I shop therefore I am” pokes fun at the dominant ideology. In 1996, she used the advertising space of New York buses to engage passers-by with an enormous animated eye and the injunction “Don’t be a jerk”. A few years later, she added sound to her pieces and made films that played on the distortions between images and meaning. The 2004 installation Twelve is a multi-screen broadcasting of video recordings of conversations between people evoking their relationships (with their family, in their couple, or others), which aims to precisely highlight the “choreography” of these exchanges. 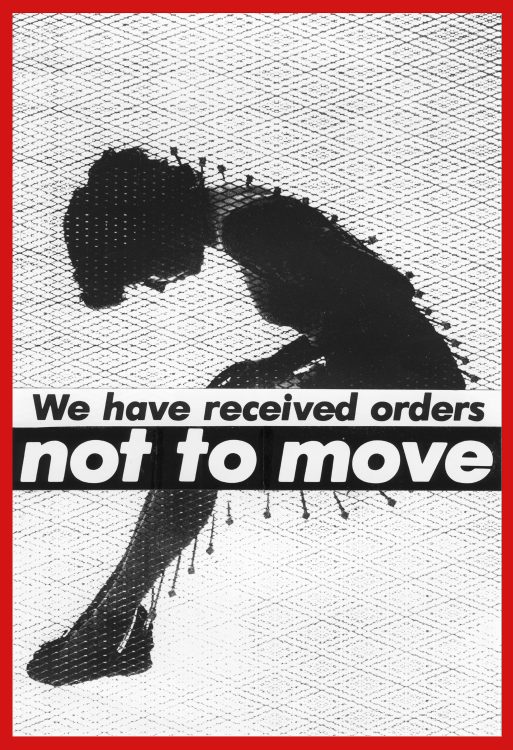 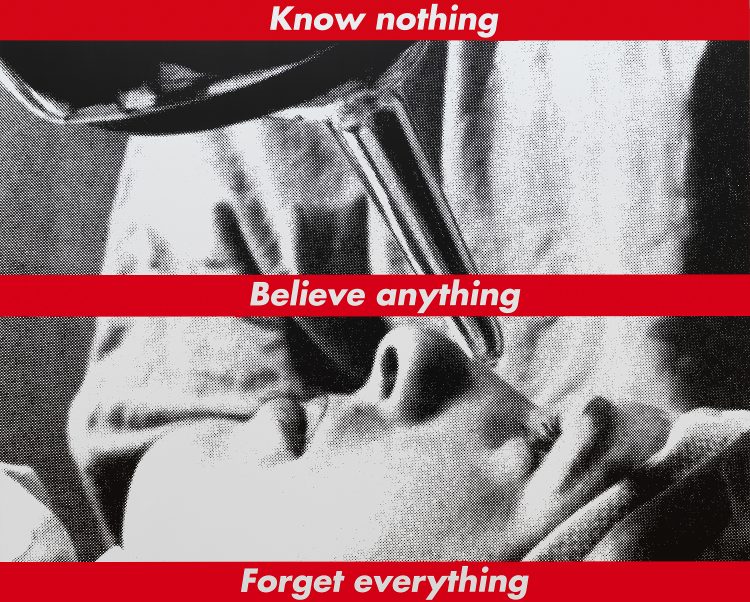 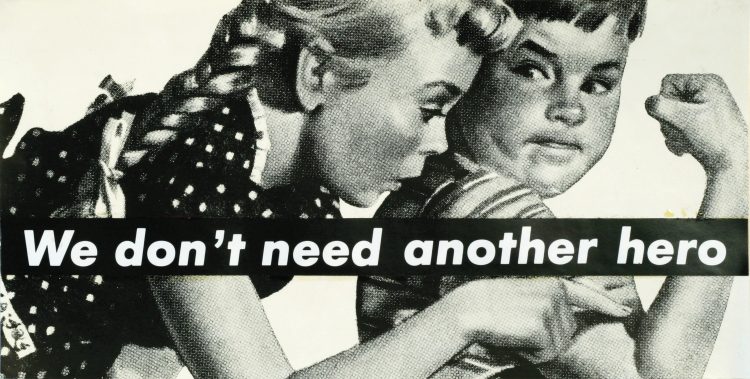 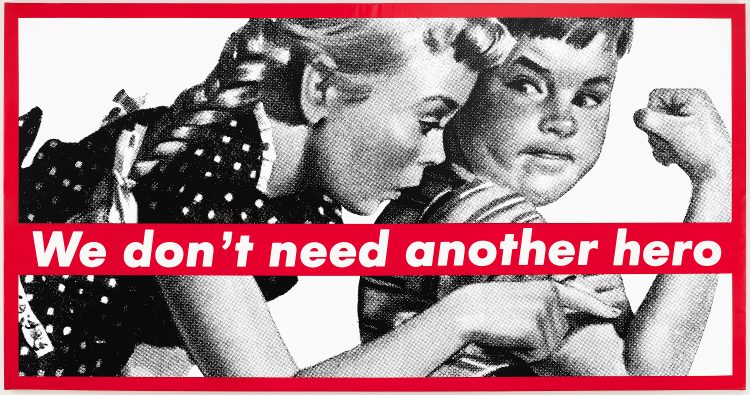 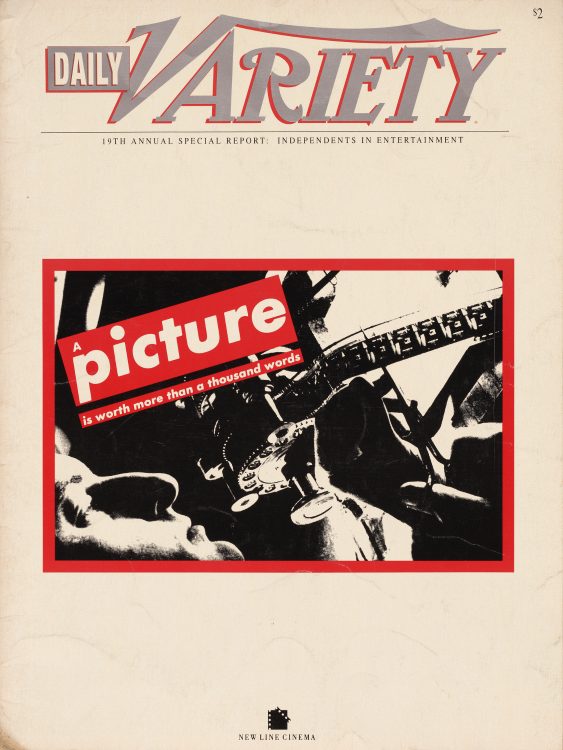 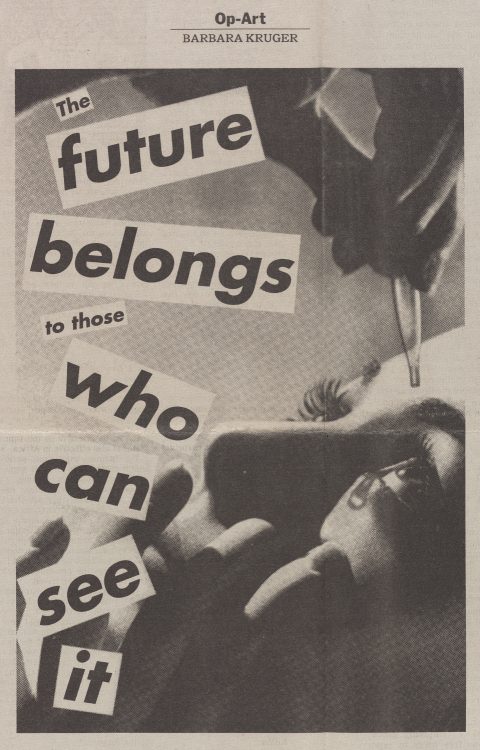 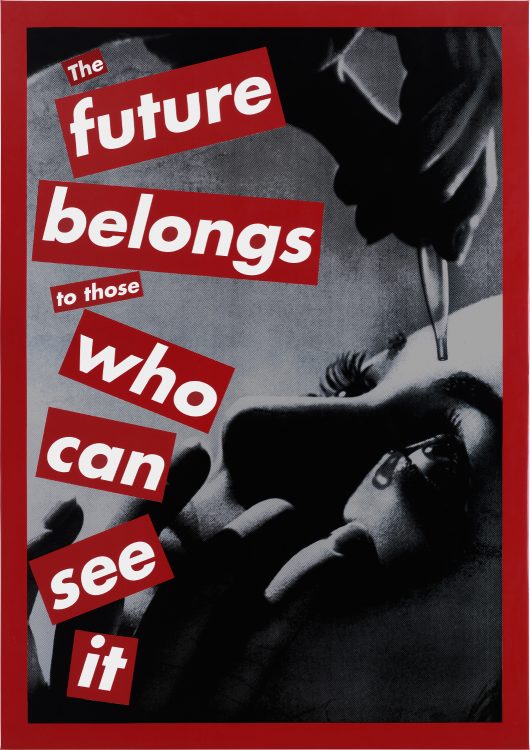 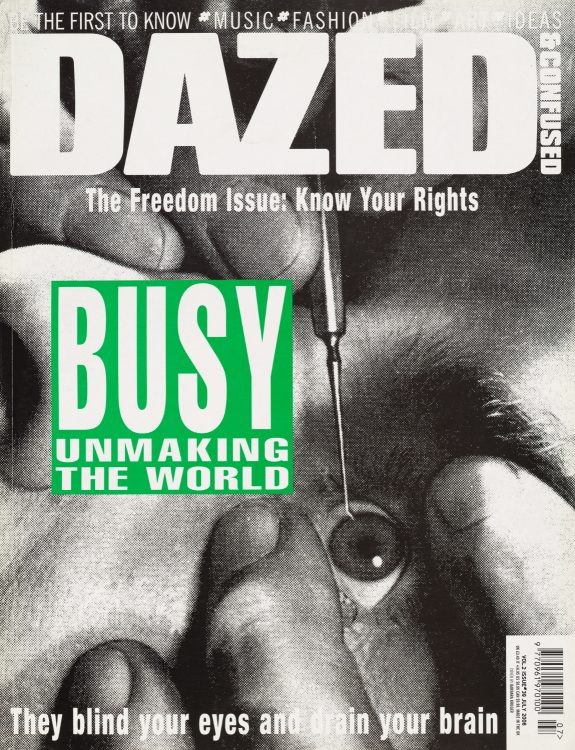