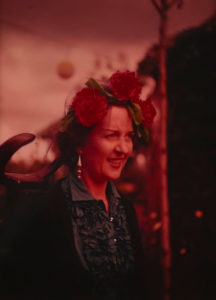 Dorothea Tanning attended the Academy of Fine Arts in Chicago and, as an admirer of Beardsley’s work, moved in 1938 to New York, where she frequented surrealist circles and met Max Ernst, whom she married in 1946. She socialised with the group Surrealists in Exile that gravitated around André Breton and Marcel Duchamp and had her work shown by gallerists Julien Levy (1944, 1948) and Alexandre Iolas (1953). It was also featured at Peggy Guggenheim’s 1943 show Exhibition by 31 Women, and alongside works by Gottlieb, Rothko, and Baziotes at events such as Abstract and Surrealist Art in America, which toured in 1944, one year prior to her solo exhibition at the Crosby Gallery in Washington. Throughout these years, she made a name for herself on the New York art scene as one of the pioneering figures of women’s expression in post-war American art. Her visual hallucinations were based on sexual fantasies, anxieties, and fears rooted in childhood and adolescence. In her first large canvases, like Poppy Hotel (1941), a door can be seen opening onto empty living quarters enclosed with windowless walls torn apart by animal or human creatures writhing in the throes of a latent desire. They also often feature vaporous veils and drapes hung from wall to wall, as if to mask appearances. Her dreamlike world is filled with timid, provocative, dishevelled young women, giant sunflowers, plants, and carnivorous insects (Eine Kleine Nachtmusik, 1943; Palaestra, 1947), which she depicts with a cold, Magritte-like meticulousness (Dream of Luxury, 1946) and a hallucinatory precision reminiscent of a cruel fairy tale (A Very Happy Picture, 1948).

The “tableau vivant” quality of these works earned her commissions to design sets and costumes for the theatre, film, and ballet, including the Ballets Russes de Monte Carlo’s The Night Shadow (1945). However, most of her career would remain focused on painting and engraving. From the 1950s, her visions became increasingly vague, with the dislocated and monstrous bodies of humans and animals (The Rose and the Dog, 1952) curled up and tightly squeezed into unidentifiable spaces. While the artist expressed the all-powerful nature of desire’s dangerous call, she also revealed the buried, fetishising, and deeply “distorting” impulse that governs it, like so many distressing states of consciousness of the bodily ego reminiscent of the Freudian uncanny. She began to work on sculpture in the mid-1960s, using daily materials traditionally associated with women, such as velvet (Pincushion to Serve as Fetish, 1969), pink fabric and lace, wool, and faux fur, enabling her to fully objectify the phantasmatic and familiar hand-to-hand at play in her imagination. Her metamorphic creatures, which exist only in fragments (buttocks, arms) are giant dolls made out of cloth and animated by subterranean and tentacular forces, like poisonous flowers. Scenography remained an essential part of these pieces, with enclosed spaces, furniture and bodies always presented as an indissociable whole. In Poppy Hotel Room 202 (1974), two dismembered and highly eroticised naked female bodies try to pry themselves free of the walls of the room they are trapped in, while the limbs of human-shaped furniture, covered in masculine brown wool, twist and writhe in an attempt to reach them. D. Tanning’s work, which was more readily accepted in Paris than in America, invites obvious comparison with the poetics of Sade, which energised the last surrealist generation in France by bringing, much like her fellow artist Toyen*’s work, a feminine vision to the erotic imagination of the movement. The various principles at work in her soft sculptures and her environments – salvaged everyday materials, dismemberment and shattering of the self, entrapment, repression, and voyeurism – echo some of the modes of expression of American Pop Art (Claes Oldenburg’s Soft Sculptures) and of Anti Form (from Morris Louis to Eva Hesse*), and bear a resemblance to Louise Bourgeois’* organic sculptures from the 1990s, among others. Lastly, D. Tanning also gave us an insight into her self in books of poems (A Table of Contents), dream descriptions, and autobiographical texts, thus making her approach a part of a more contemporary perspective. 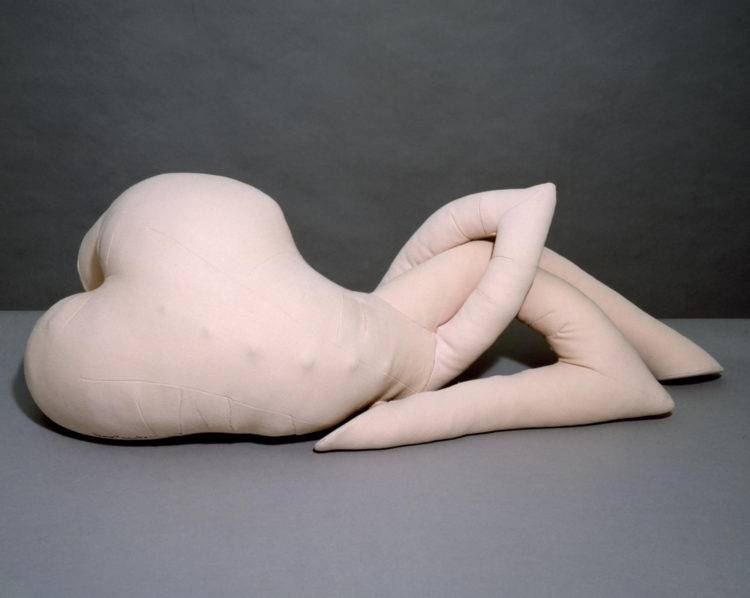 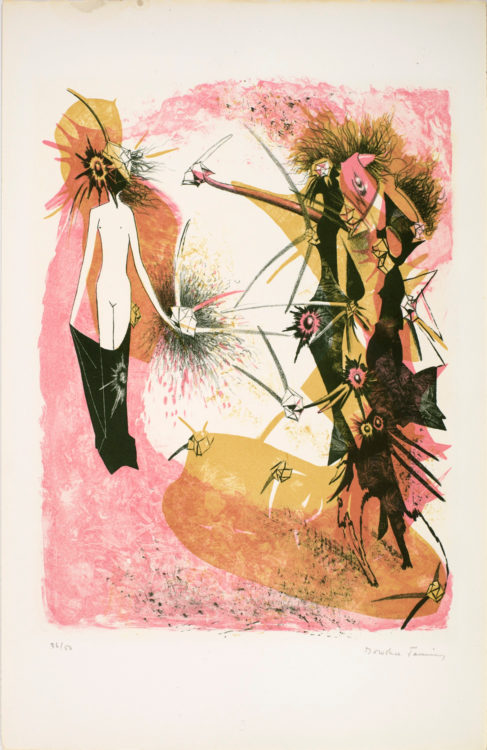 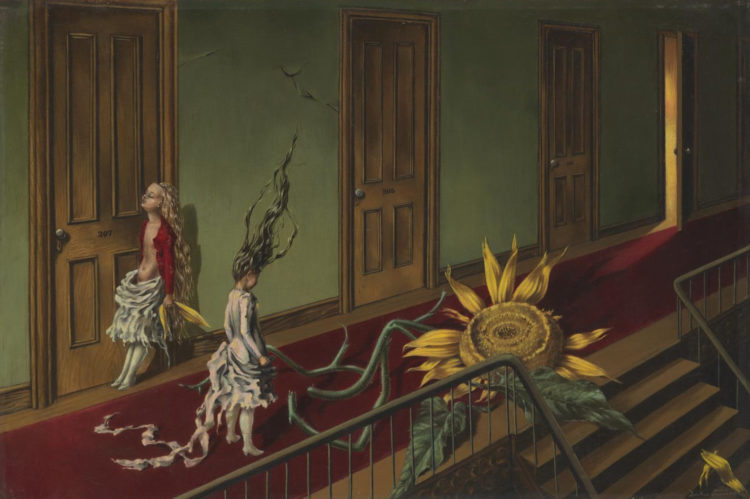 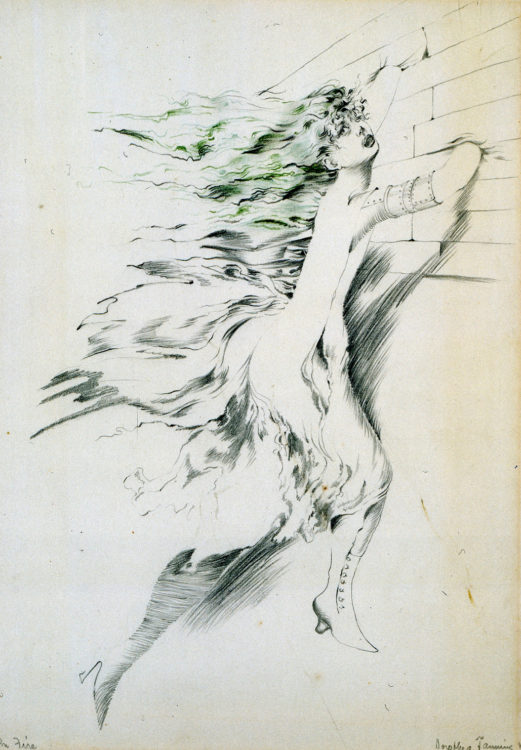 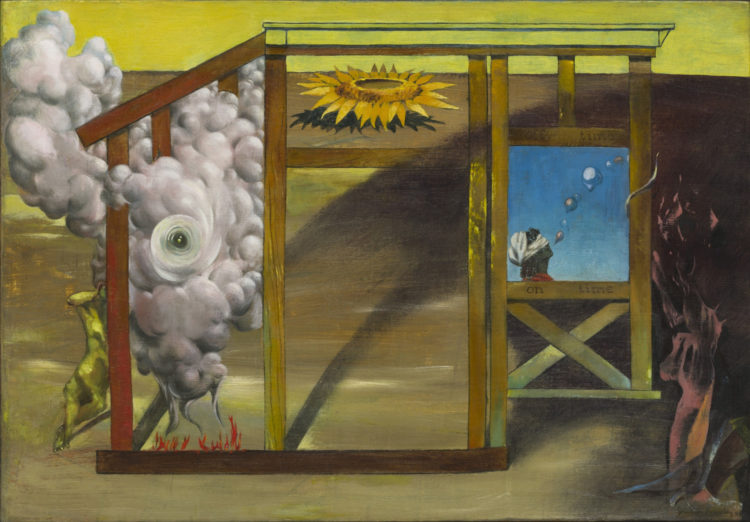 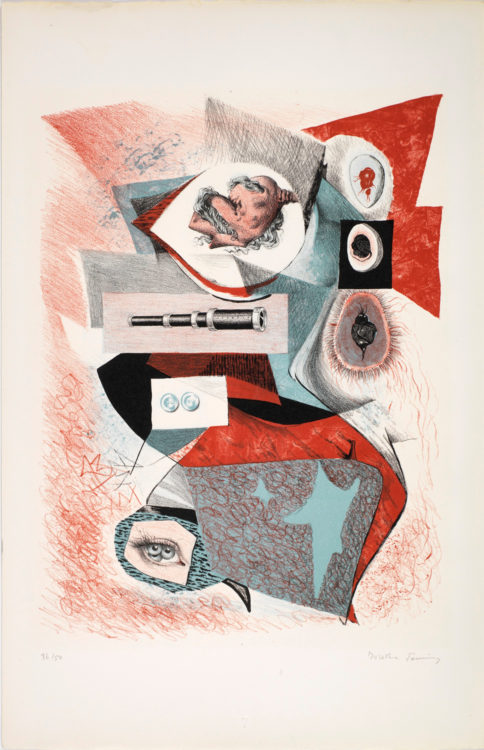 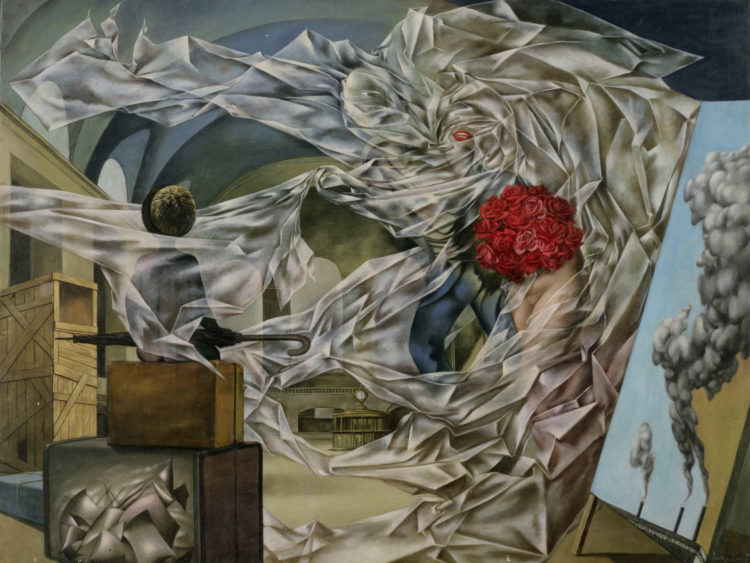