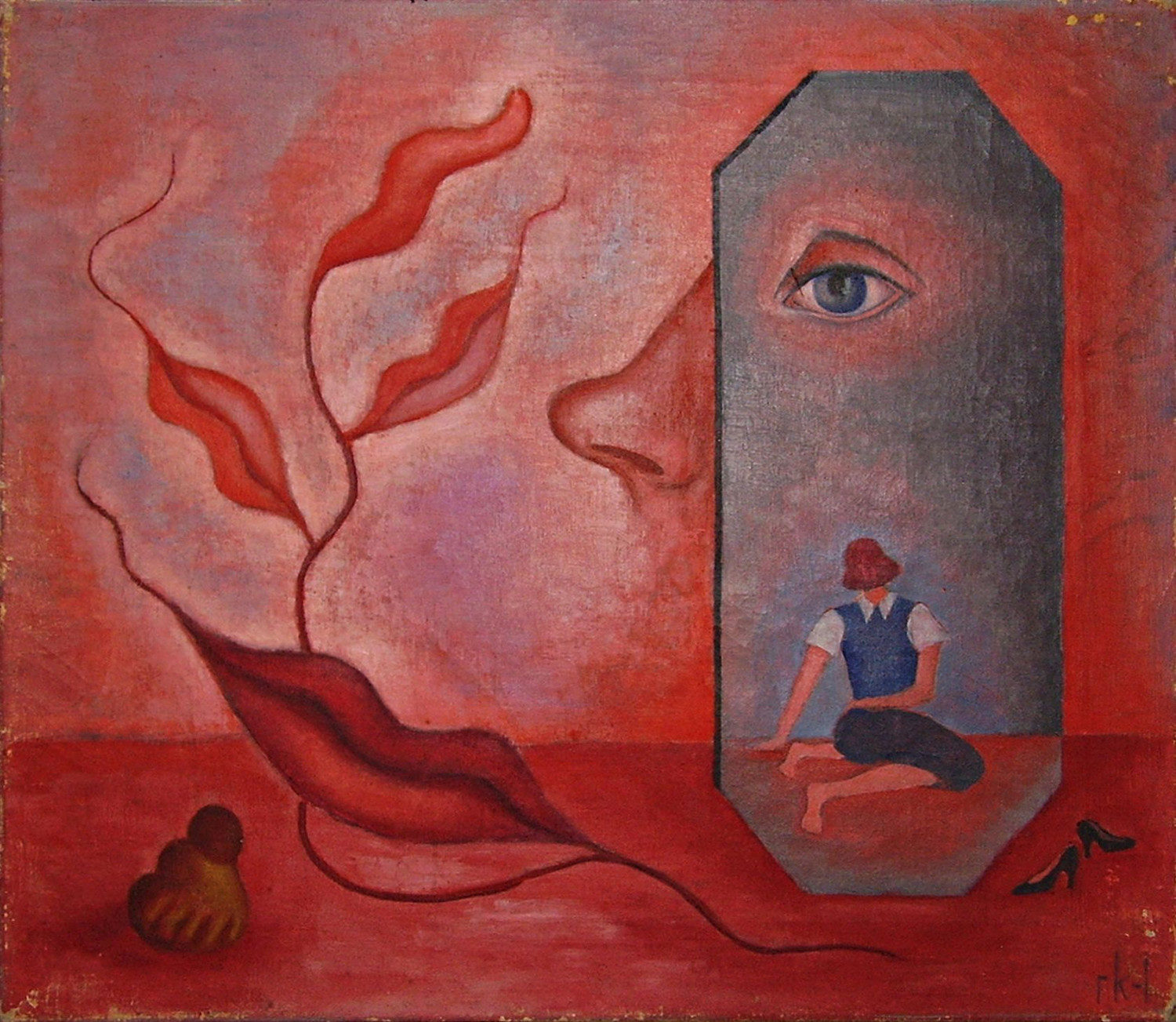 This first exhibition at the Peggy Guggenheim Collection Project Rooms in Venice focuses on an important period in the career of both women: for the Danish painter Rita Kernn-Larsen (1904-1998), her first large-scale personal exhibition at Guggenheim Jeune Gallery in London in 1938, and for the American sponsor, art collector and gallery owner, the first Surrealist exhibition she organised at the time, thus launching her support for the movement.

The Venice exhibition partially recreated that of 1938 by showing six of the 36 paintings presented at the time, accompanied by later work and some archive documents – photographs, lists of works and invitation card. When visiting this important collection of which the last retrospective dates back to 1995 at the Randers Kunstmuseum, in Denmark, the lack of space can be disappointing. 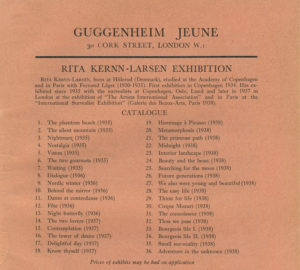 Catalogue of the Exhibition of Surrealist Paintings by Rita Kernn-Larsen at the Guggenheim Jeune Gallery, London, 31 May-18 June 1938, printed in the London Bulletin, 3, June 1938, Peggy Guggenheim Collection Archives, Venice. 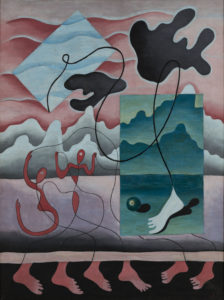 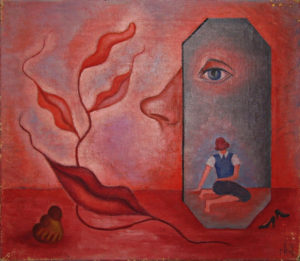 Kernn-Larsen is one of the few women who played an important role in the international Surrealist movement, along with Eileen Agar, Leonora Carrington and Kay Sage. She received an academical education in the field of art in Denmark before joining the Académie moderne de Fernand Léger in 1930-1931, who, by entrusting to her the transfer of his drawings to monumental formats, will have a fundamental influence on the flat style fostered by the young painter’s cubism. Strengthened by this first immersion in avant-gardist art, she reaches out to the Danish surrealist group upon her return to Copenhagen and exhibits her works with them over the following years in Denmark, London and Paris, the latter being the town where she meets Peggy Guggenheim during the winter of 1937.

The London exhibition presents paintings dating from 1935 to 1938. Those exhibited in Venice are amongst the artist’s major works, such as Dance and Counter-Dance (1936), Self-Portrait (Know Thyself) (1937)1 and Searching for The Moon (Vers l’inconnu) (1936-1937). In these works, the artist explores her own subjectivity by combining elements of dreams, memories of experiences and her imagination. Recurrent themes are the mirror, the female nude – marked by the influence of F. Léger –, linear biomorphic forms and women as arboreal figures, a subject that appears at the same time in the works of Paul Delvaux2. In her autoportrait in 1937, her mouth is thus transformed into a leaf and The Women’s Uprising (Kvindernes opror) (1940), that she painted later, shows the growing importance of this theme that linked woman and nature’s fertility. 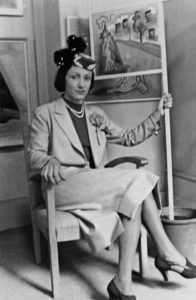 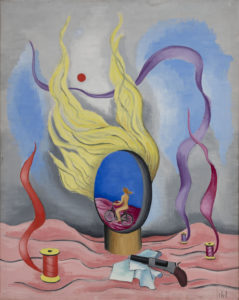 For the 1938 exhibition, the artist herself creates the frames for her paintings using a surrealist environment of which we would have liked to recapture the spirit in her Venetian re-enactment: one showed a handle being grabbed by a padded glove, the other, that we can see in one of the archive photos on show, was attached to a wooden stick thrust into a pot of flowers. On the day of the opening, R. Kernn-Larsen wears a hat decorated with small bells and oat flakes that fly off in clouds with each step. She is highly acclaimed by London critics.

After the exhibition, she finds herself stuck in London, along with her husband, because of the world war, so she takes part in the meetings and exhibitions organised by the London surrealist group. Her experience of the war will have a fundamental impact on her painting. Considering that reality has gone way beyond her worst fantasies, she turns once and for all towards abstraction. Her surrealist period will remain the most productive and most meaningful: “It truly was the best time for me as an artist3 ” she said in the 1960s.

1
Work acquired by the Solomon R. Guggenheim Foundation in 2013.
2
An example of which is The Break of Day de 1937 on show in the rooms of the Peggy Guggenheim Collection.
3
« It truly was the best time for me as an artist. » Kernn-Larsen (1967), in Birgit Hessellund, Rita Kernn-Larsen -En international dans surrealist, cat. exhib., Randers, Randers Kunstmuseum, 1995, p. 4, translated into English by Grazina Subelyte.