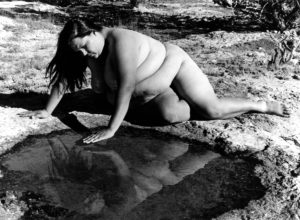 Selz, Peter, “On Racism, Discrimination and Identity Politics”, in Art of Engagement, Visual
Politics in California and Beyond, Berkeley, University of California Press, 2005

“If you’re a person of color and take pride in yourself and your culture,” wrote Laura Aguilar in her 1993 photograph Don’t Tell Her Art Can’t Hurt Her (Part C), “and you use your art to give a voice, to show the positive, how do the bridges get built if the doors are closed to your voice and your vision?” Throughout her life L. Aguilar would grapple with this question of how to represent and document the often-unrepresented communities of which she was a part. An influential figure in the Chicanx and queer art worlds of Los Angeles, L. Aguilar became most known for confronting viewers with poignant images of nonconforming bodies and identities, which included self-portraits of herself as a large-bodied, working-class lesbian of Mexican descent. Through many of her series such as Latina Lesbians (1986-1990), Clothed/Unclothed (1990-1994), and Plush Pony (1992), L. Aguilar documented the queer, BLACK and BROWN, and working-class communities of Los Angeles through black-and-white portraits that positioned their embodiment as both vulnerable and celebratory.

Laura Lee Aguilar was born in the San Gabriel Valley, east of Los Angeles, to a long ancestral maternal lineage that was at least five generations of native Californios. Rooted in the American Southwest landscape, this familial lineage would challenge and define what it meant for her to be Mexican, American or both in the 1980s, which is a struggle depicted in her series How Mexican Is Mexican (1990) and her landmark self-portrait Three Eagles Flying (1990). This struggle greatly impacted L. Aguilar’s vision as an artist interested in the complicated ways in which identity is mapped onto the body. Though L. Aguilar was largely self-taught due to a difficult relationship with the educational system, as her auditory dyslexia was not diagnosed until later in her life, she actively sought the mentorship of photographers Suda House (b. 1951), Judy Miranda (b. 1946), and Mei Valenzuela (b. 1945), all of whom taught at one point at the East Los Angeles College (ELAC), which L. Aguilar briefly attended. She would later establish friendships with photographers Judy Dater (b. 1941) and Joyce Tenneson (b. 1945), both of whom would mentor L. Aguilar and encourage her to expand on her burgeoning practice of nude portraiture, which she established by 1989 with one of her most celebrated works In Sandy’s Room. The black-and-white photograph is a self-portrait of the artist as a reclining nude, challenging normative conceptions of feminine beauty. In it L. Aguilar rests beneath an open window and directly in front of a fan, her feet up and a cold drink in hand. One can imagine she is resting from a sweltering summer. From the mid-1990s to early 2000s L. Aguilar would go on to explore her embodiment in relation to the American desert, where her bulging belly and natural dimples and folds would be perfectly mirrored by large boulders, stippled ground, and undulating creeks as seen in her series such as Nature Self-Portrait (1996) and Grounded (2006), amongst others.

In 2017, a year prior to her untimely death, the Vincent Price Art Museum, located within ELAC’s campus, mounted Laura Aguilar: Show and Tell, the first comprehensive retrospective, which was accompanied by a catalogue including critical essays by esteemed artists, scholars and art historians paying respect to L. Aguilar’s brilliant artistic practice. Since then L. Aguilar’s work has seen a resurgence in interest through new exhibitions, scholarship and museum acquisitions. 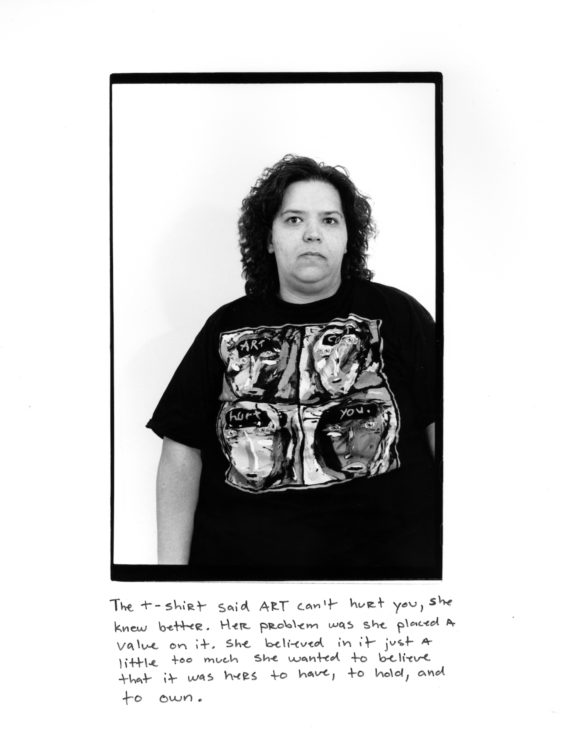 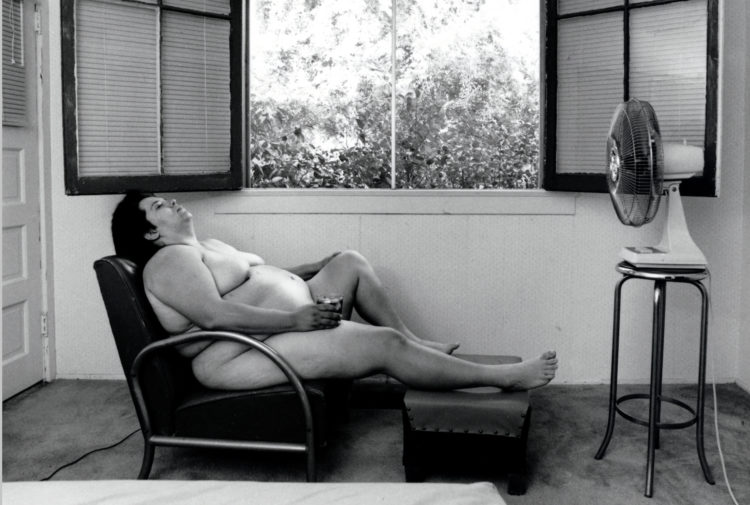 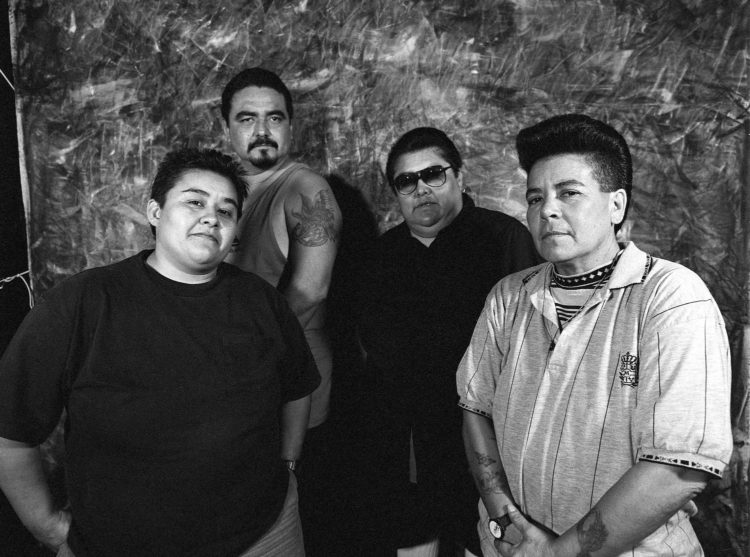 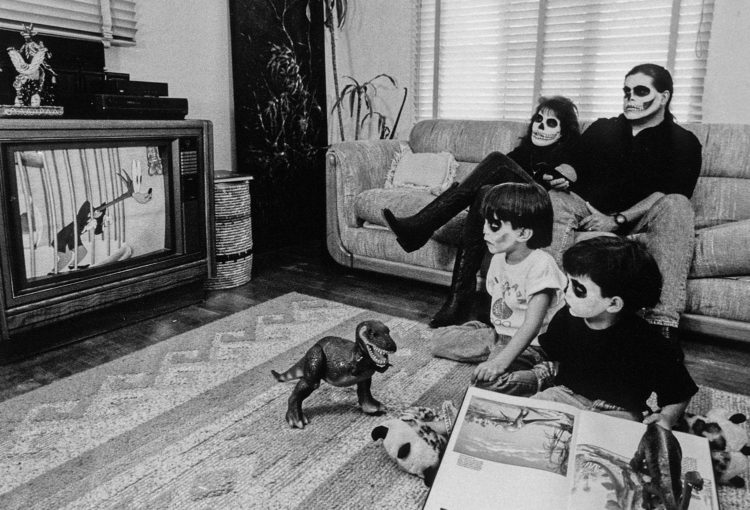 Laura Aguilar, At Home with the Nortes, 1990, gelatin silver print, Courtesy the artist and the UCLA Chicano Studies Research Center 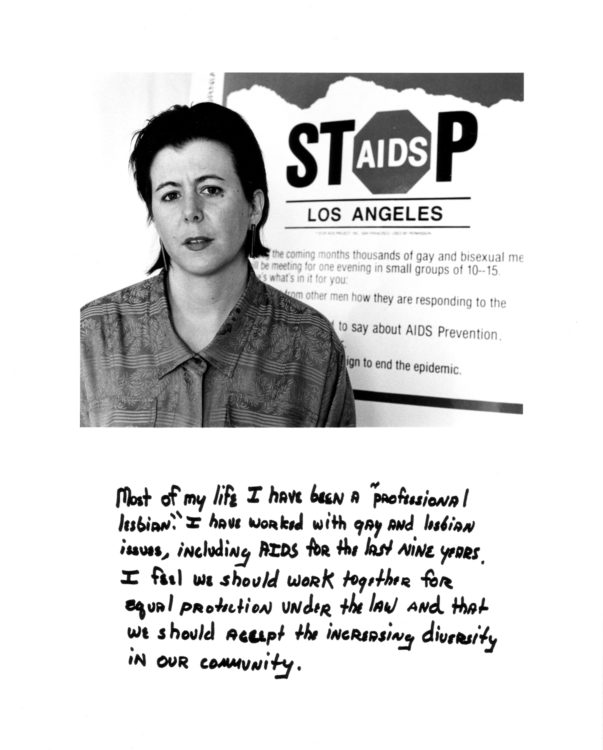 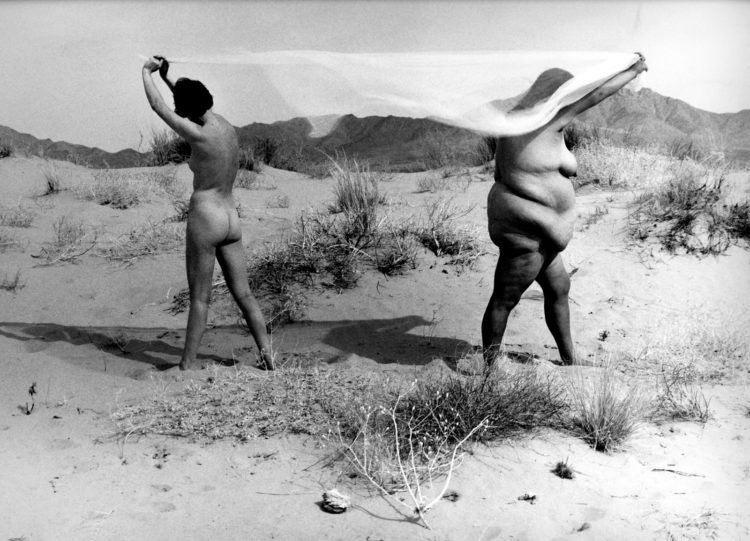 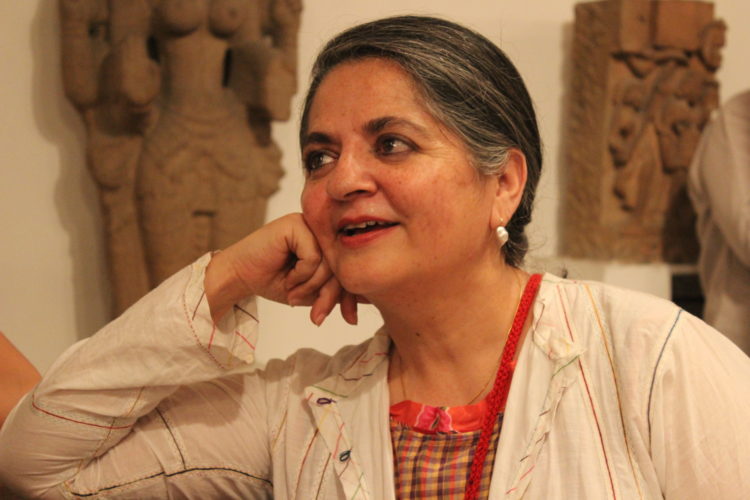