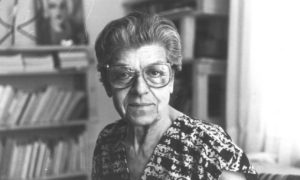 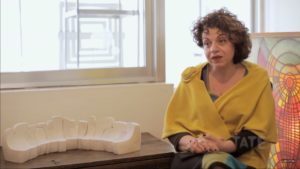 Saloua Raouda Choucair, From Beirut to Tate Modern
Link
→ Works by the artist in the French public collections of the Videomuseum network

Saloua Raouda Choucair is considered one of the earliest abstractionists in Lebanon. Her practice spanned from the 1940s until the 1990s and included painting and sculpture as well as homeware and jewelry design, illustration, and architectural models, comprising a very diverse body of work that often defies categorization.She was interested in developing a practice that took inspiration from Arab-Islamic history. Though she was not religious, she was inspired by the thought and concepts of Islamic thinkers, particularly the Sufi philosophers, and thought that the Islamic rejection of pictorial art demonstrated that many parts of the Arab world had a natural inclination and sensitivity towards abstraction. She believed that the rejection of form led to the search for the essence of what was meant to be expressed and that this was a fundamental way of understanding Arab intellectual thought.

S. R. Choucair didn’t begin practicing professionally as an artist until her thirties, although she had privately trained early on with Omar Onsi (1901-1969), one of the most important painters of the time, and had been a member of Moustafa Farroukh’s Art Club (1901-1957) while working as a librarian at the American University of Beirut. She attended the American Junior College for Women (which became the Lebanese American University) and studied natural sciences, teaching for a short time in Kirkuk, Iraq, before returning to Lebanon. About this time in 1944 she also took a foundational trip to Egypt, where she toured Alexandria and Cairo and was inspired by the region’s architecture and art.
In 1948 S. R. Choucair moved to Paris, studying at the École nationale des beaux-arts before spending three months in the studio of Fernand Léger (1881-1955). She left after feeling unsatisfied by his approach of abstracting the perceived world and sought to develop her own approach. She then became an early member of L’Atelier de l’art abstrait and went on to have her first solo exhibition at Galerie Colette Allendy and to show in the Salon de réalités nouvelles in 1951 before returning to Beirut.

She continued to build on the concepts of Islamic history, creating series such as the Trajectory of a Line (c. 1950s) in paintings and sculpture that meditated on the potential for the line to create form, or her Interform (c. 1960s) sculptures, which considered the interior rhythms of geometric space. She is perhaps best known for her Poems and Couplet series, which explored the formal expression of the structure of the Arabic poetry known as the qasida.

As a sculptor, she created works with the potential to scale and transform through varied materials. She worked in wood, stone, metal, fiberglass and terracotta, most frequently rendering forms in terracotta initially before creating iterations in other materials. She believed in the possibilities of art and wanted to explore the expansiveness of it through the exploration of the infinite and the creation of artworks that varied in scale from the tiny and personal (jewelry) to the monumental. She dreamed of having public sculptures in all of the capitals of the Arab World.
S. R. Choucair’s work is in the collection of the Tate Modern (United Kingdom), the Metropolitan Museum of Art (United States), the Mathaf Museum of Arab Modern and Contemporary Art (Qatar), the Sharjah Art Foundation (United Arab Emirates), the Sursock Museum in Beirut, and the Barjeel Art Foundation (United Arab Emirates), among others. She has two public artworks in downtown Beirut, one at the American University of Beirut, and one at Mathaf in Doha. 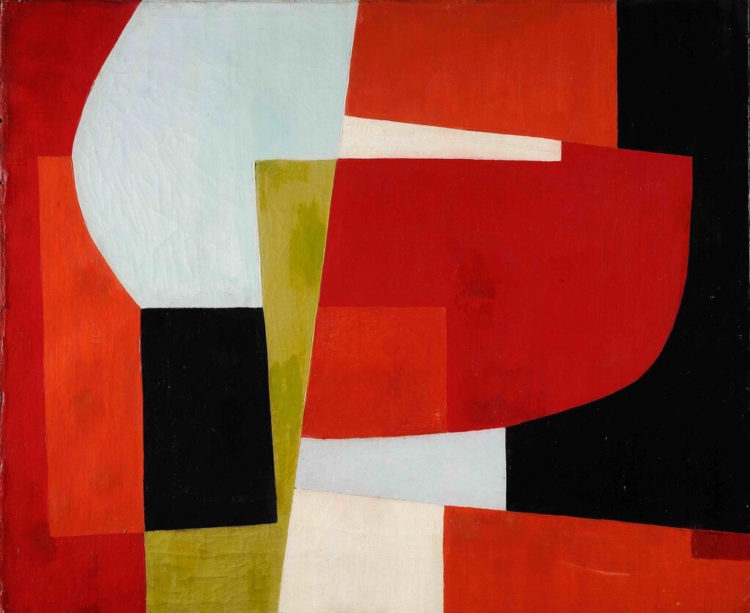 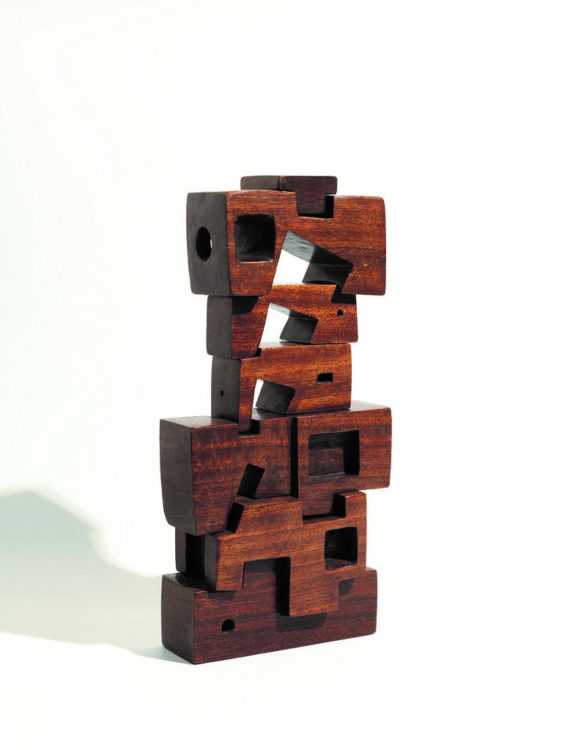 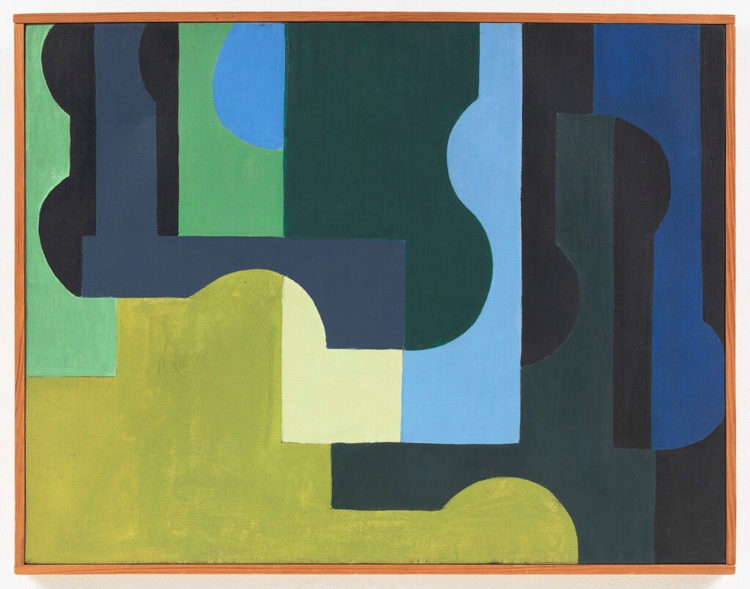 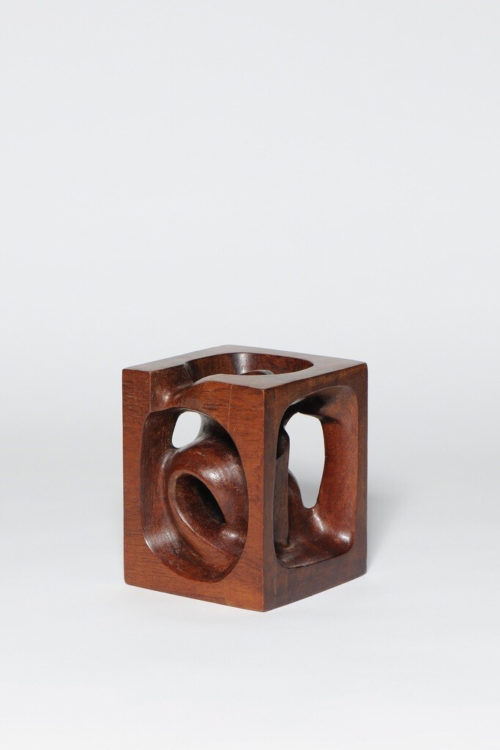 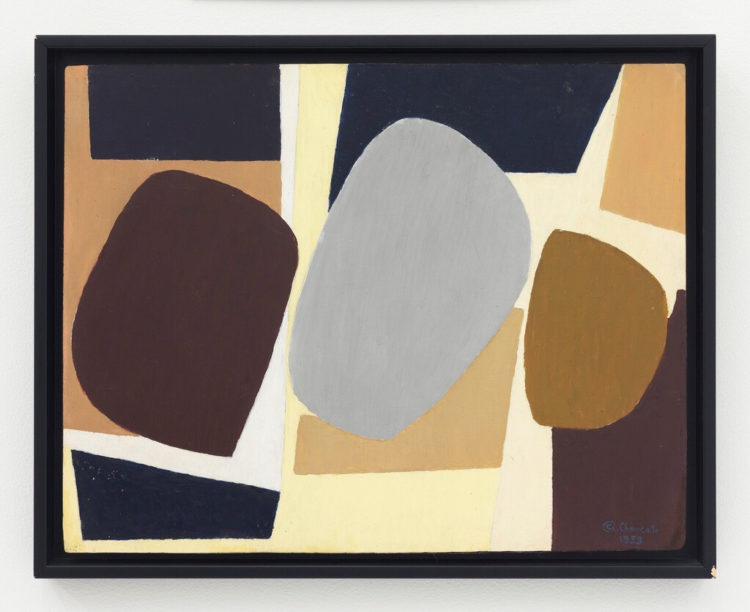 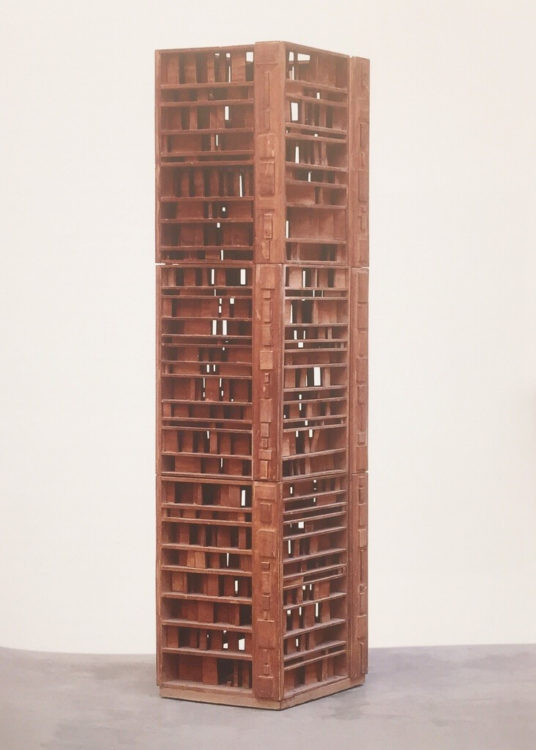 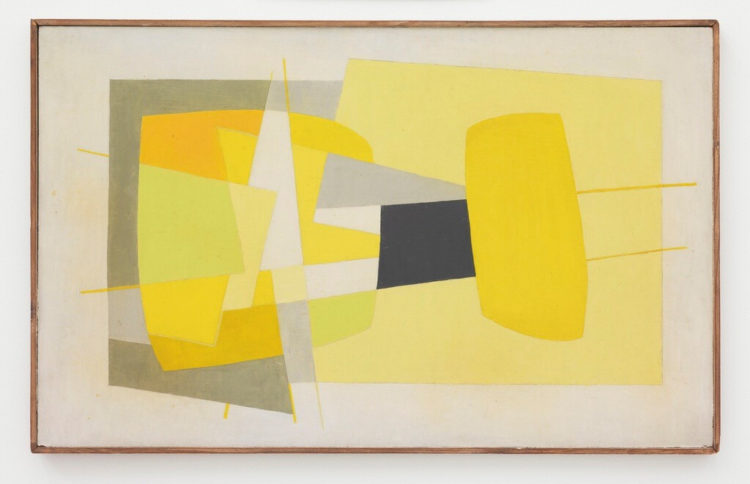 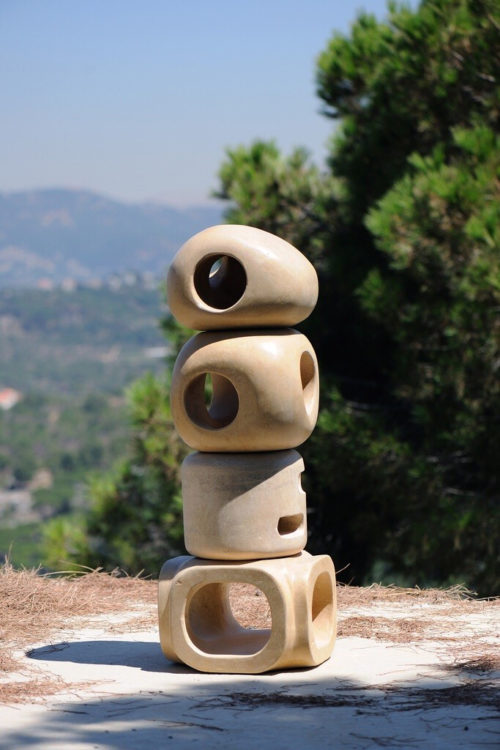 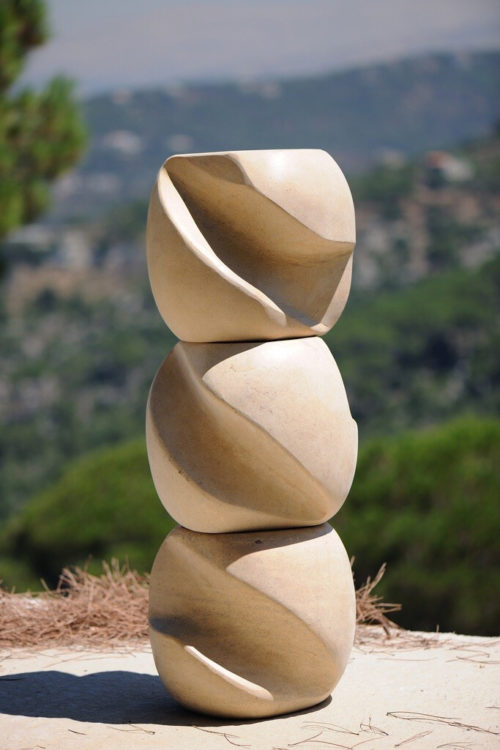 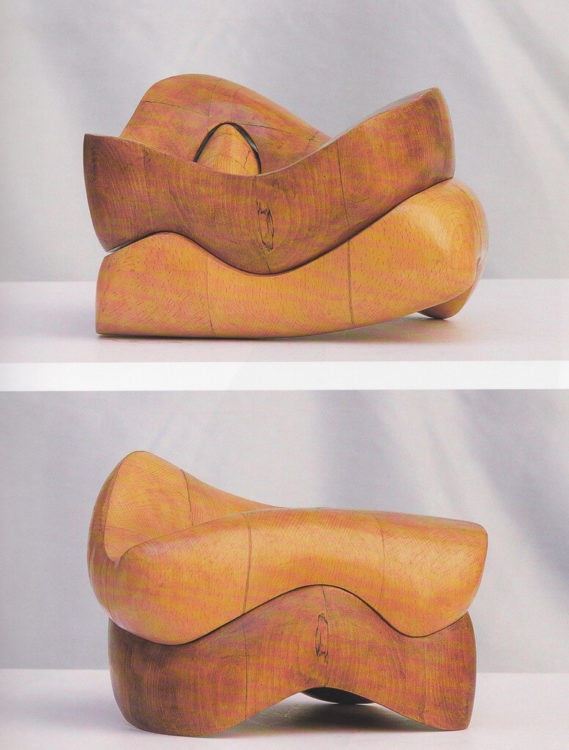 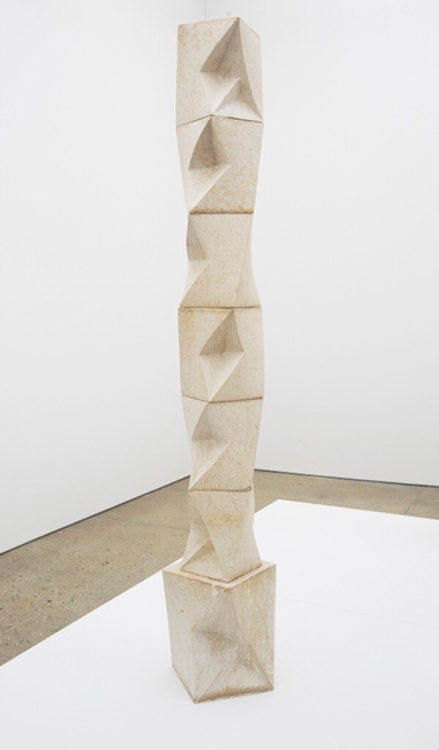 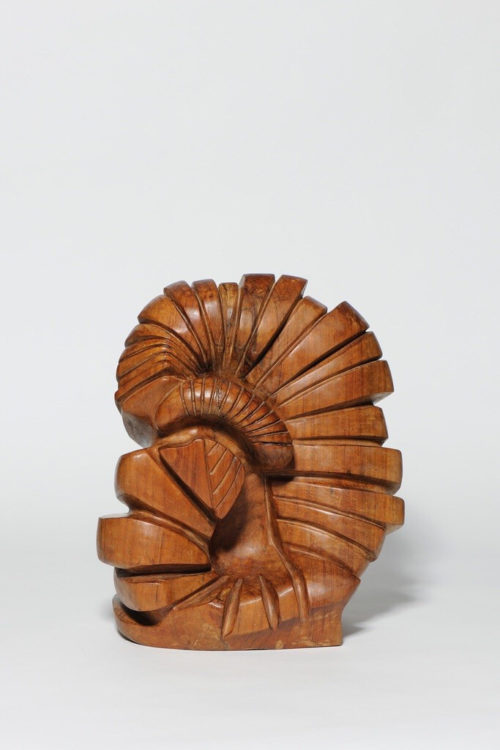 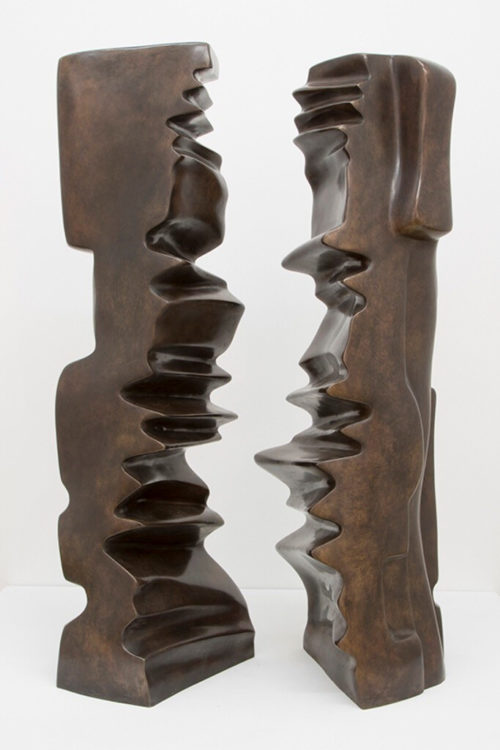