The exhibition of the works of Dóra Maurer (born in 1937) at Tate Modern is divided into five rooms, with thirty-five works, dating from 1970 to 2016.

By way of introduction, the first works present a small sample of the Hungarian artist’s various practices. The visit starts with a selection of photographs and drypoints on paper, created between 1970 and 1980, illustrating the artist’s formal shifts and changes. Her contact print compositions give us an insight into her creative process, with a succession of pictures documenting the stages of her minimalistic gesture. Seven Twists I-VI (1979, 2011 print), for instance, is an accumulation of images, at once horizontal and in-depth, which plays on the idea of the artist’s own mise en abyme. 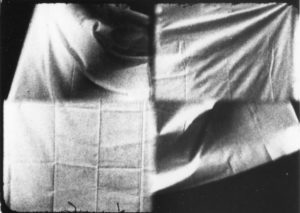 Going against the cultural policies of the Hungarian socialist regime, an entire generation of experimental artists developed neo-avant-garde practices that ran alongside official art and tested its imposed boundaries. Beginning in the 1960s and 1970s, this non-conformist movement offered alternative ways of making art, setting up workshops and educational programmes for young artists. As she took part in these emerging trends, D. Maurer produced politically conscious pieces such as KV’s 1st of May Parade on Artificial Ground (1971), a circular, solitary parade that perhaps symbolises the country’s endlessly repeated ideology. Known for her marginal art, she also addressed issues of gender, which unfortunately are not mentioned in the exhibition. 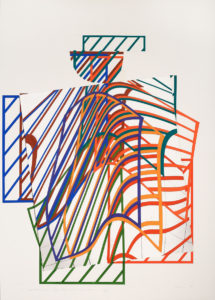 This form of graphic art, which predates her more processal and conceptual output, ties in with her cinematic work, which Tate Modern presents in the exhibition’s following room. Triolets (1981), a film in three trisected frames, is shown alongside the swinging movements of a lamp in her film Relative Swingings (1973/1975). The overall presentation has a hypnotic quality to it, and insists on the idea of repetition, variation, and movement – the underlying themes of the exhibition, which follows a thematic progression. The first four rooms – “Movement and Change”, “Moving Images”, “Displacement and Perception” and “Space Painting” – pave the way for her more recent three-dimensional pieces. Unfortunately, because these are relegated to a small room, they are not able to express the full range of their dancing qualities and vibrancy. These brightly coloured “Form Gymnastics” – most notably Stage II (2016), a particularly significant composition – follow on from her Quasi Images, as D. Maurer calls them, which consist in distorted or decomposed structures and spaces painted in complementary colours. Rhythm was already a perceptible element in her 5 out of 4 (1979), which she based on the Fibonacci mathematical sequence. 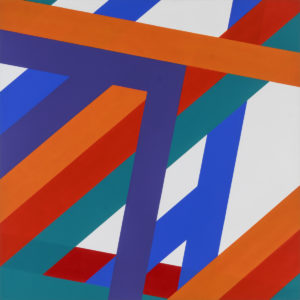 It would have been interesting to have further insight into the way the artist thinks of colour and complementarity, as well as into her connection to teachers and painters Johannes Itten (1888-1967) and Josef Albers (1888-1976), and art theoretician Johann Wolfgang von Goethe, as these elements are so ubiquitous in her sketches, her entire body of work, and her teaching. However, the exhibition’s insistence on graphic and serial aspects allow us to better understand D. Maurer’s expressive body of work as a whole. It is also worth mentioning that this was the artist’s first solo exhibition in the United Kingdom. Let us hope that it will open up deeper perspectives into her work.