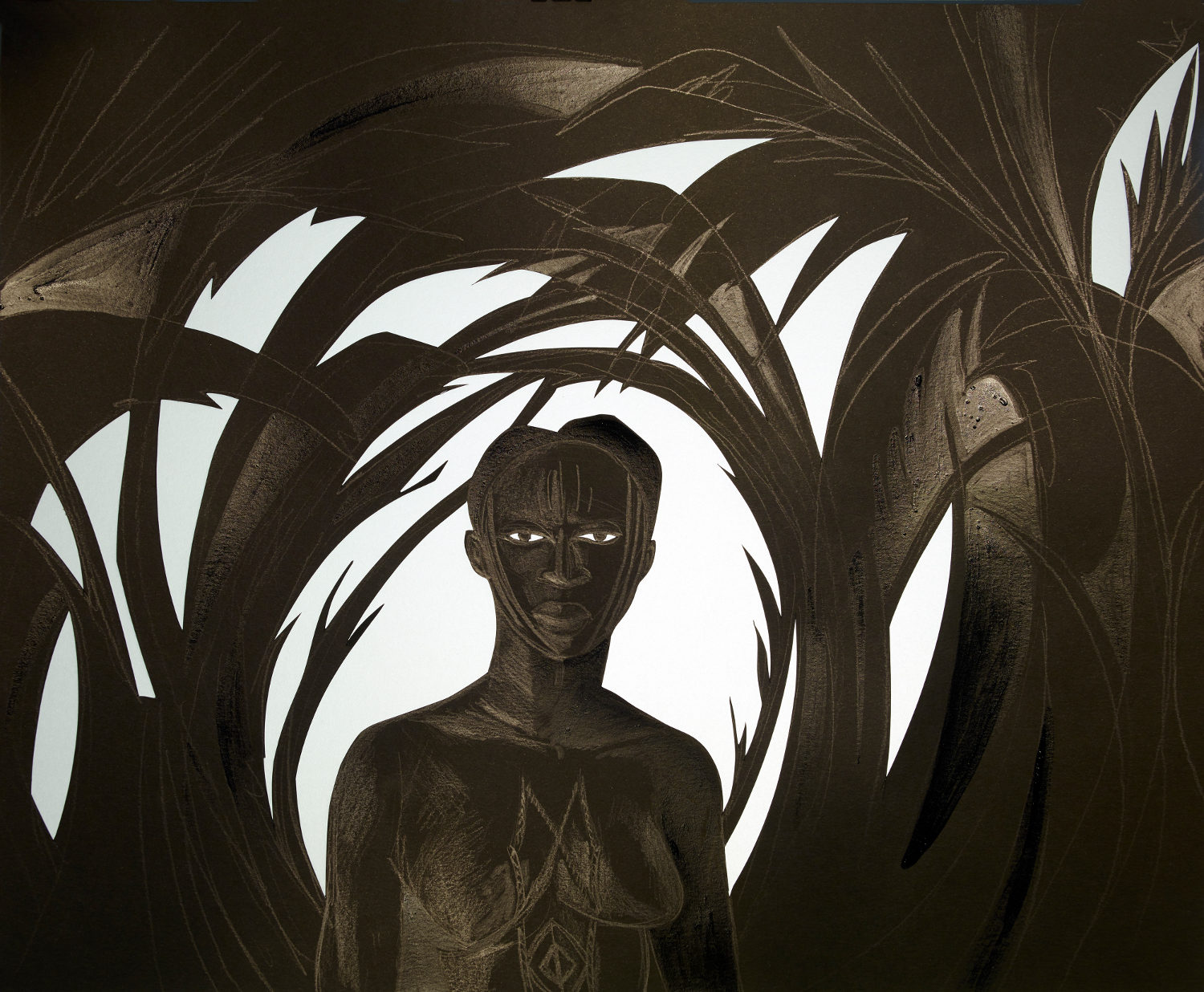 For the second show devoted to American artist Kara Walker in 2015, the Victoria Miro Gallery displayed the drawings she made to prepare for her adaptation of Norma, Vincenzo Bellini’s flagship opera. 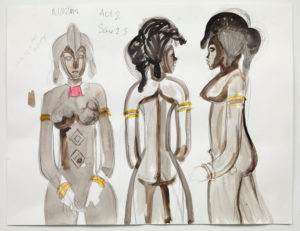 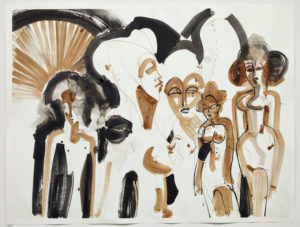 Kara Walker is well known for her fierce examination of the history of slavery and its impact on race and gender relations in contemporary America, themes often approached though the ironic and visually violent deconstruction of current stereotypes. In her black and white cut paper silhouettes, which have become her trademark, the combined presence of both colours highlights their symbolic opposition in the context of the United States. But the artist also employs other mediums, from painting to performance through video, and most recently sculpture. This year, she tries her hand at opera directing, set and costume design, via an invitation from curator Okwui Enwezor to occupy the Teatro La Fenice during the 56th Venice Biennale. The black bodies, and specifically black female bodies and their representations, are a pervasive theme throughout her body of work and her adaption of Norma is no exception. 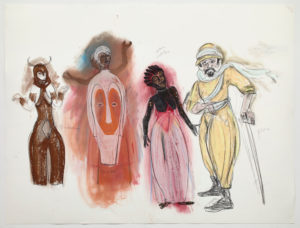 The action no longer takes place during the Roman invasion of Gaul circa 50 B.C., as it did in the original opera, but rather in an unidentified African colony along the Ogooué River, perhaps in Gabon or the Congo, occupied by a European power towards the end of the 19th century. The opera tells the story of Norma, an influential African priestess and mistress of Pollione, the leader of the colonial delegation. Pollione becomes disinterested in Norma who, realising how she betrayed her own people by falling in love with the oppressor, ends up throwing herself into the flames, followed by Pollione. These dramatic events take place in the context of the uprising of the oppressed population, led by Norma’s father, Oroveso, and places the black woman and her affect in the centre of political issues, raising questions about her status and representation in contemporary society. 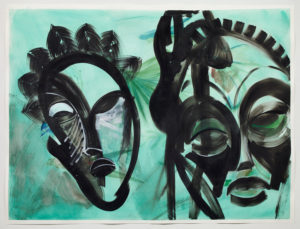 By putting on display these symbols and clichés, which are the signs of African identity and black femininity as constructed by the Western world since colonisation – such as the presence of masks, naked, tattooed, and sexualized bodies – the artist intends to confront the public with these constructions head-on. The Victoria Miro Gallery exhibition introduces us to the preparatory studies on the themes she sought to examine and invites us to discover the images she envisioned during the creative process. The black and white silhouettes that bring to mind this historical opposition between colonized and coloniser are obviously present, however her pastels, watercolours, and even engravings are also included. Portraits of the main characters, of Norma in her voluptuous splendour, nude or clad in colourful dresses and jewellery, as well as a rather awkward-looking Pollione, whose body is, on the other hand, fully clothed. We can also grasp the importance of the masks, shown in the form of paper models. 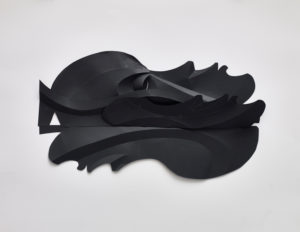 African masks, collected since the beginning of the 20th century in particular, and considered to have greatly influenced the development of modern art through the primitivism movement, continue to fascinate the Western world to this day. Their profusion here provides the opera’s contextual foundations, and become the symbols of an imaginary Africa, which appears only to exist through the exoticizing gaze of the Western man. Thus, the set design consists of what appear to be mountains, but are in fact masks, on which the action relies, reminding us of the difficulty in representing Africa without referring to the symbolic constructions it has been subjected to.