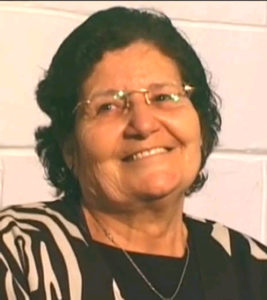 Leila Ferhat ranks among the doyennes of Algerian painting; she was one of the first women in her country to be admitted to a school of art. When still only in primary school, her drawings caught the attention of her French teacher, who encouraged her to reproduce the works of Vincent van Gogh (1853-1890). Her passion for painting gained strength as she discovered the paintings of major artists, whose images she collected on postcards and stamps before reproducing them in various mediums. Her interest in this technique was consolidated when she joined the École des Beaux-Arts in Oran, graduating in 1969. In 1971 she completed her training at the École des Beaux-Arts et d’Architecture in Algiers, under the guidance of founders of modern Algerian painting such as M’hamed Issiakhem (1928-1985) and Choukri Mesli (1931-2017), and went on to teach there from 1972 to 1975.
From that point on, demonstrating both assiduity and perseverance, L. Ferhat committed herself completely to painting. The first works by this reserved, discreet artist, simply signed “Leila” – figurative sketches of landscapes and genre paintings, luminous and imbued with a touching naivety – soon gave way to works in which the quasi-abstract rendering of daily life blossomed into poetry in motion. Her simple, accessible language, which targeted the essential, together with the empathy that emanated from it, rapidly won a public following. This encouraged her to fine tune her technique and style and delve further into her aesthetic research.

L. Ferhat drew her creative energy from her national environment, describing the country and its traditions and her emotion in the face of the suffering and joy she experienced. The artist was inspired above all, however, by women, claiming: “My favourite subject remains women, women at work, independent women, women with men.” In her watercolours, the women are striated by an eddy of lines, fractures and other Cubist or imaginary forms, highlighted in yellows and blues, representing the weight of years of oppression, shackles and misery, yet at the same time restoring both dignity and grandeur to these beings (Femme au travail [Woman at Work], 2008). Veering between abstraction and realism, L. Ferhat melds semi-abstract aesthetic research with questioning of a more social nature. Spinners, readers, dancers celebrating their liberated bodies in delicate, transparent touches (Ballerine [Ballerina], 1990) or motherhood, in pastel, gouache or ink: the subjects are always portrayed bathed in coloured light, conjuring up the forms, interwoven curves, outlines and signs of the land like so many femininities, adorned in ancestral finery and embellished by nostalgia. The artist draws her shades, lines and hues from her own recollections and it is this that enables her to recreate the emotion generated by her world and the full force of its colours. As a faithful observer, totally committed to the creation she is nurturing, the artist opens up a world of pared-down images, redolent of the atmosphere of southern Algeria.
Serene skies, oases of brown sand melting into the blue landscape, vestiges of past times: this is a vast illuminated, subtly rendered world, in which the dominant blues are sublimated by touches of yellows and ochres (Les Bédouins, 2008) – colours that rekindle the image of the Sahara, which she recounts with a simplicity matched only by the authenticity of her artistic credo.

L. Ferhat’s first exhibitions took place in 1967 in a number of Algerian cities; she then presented her work in France, in other North African countries and in Japan, Germany, Quebec and the United Arab Emirates. Her works are held in the collections of the Musée National des Beaux-Arts in Algiers, the Musée National Zabana in Oran and the Presidency of the Algerian Republic, among others. During her lifetime she received a number of prestigious awards, coming first in the Algiers Grand Prix de Peinture in 1977 and 1979 and winning the Gold Medal at the Riom International Salon in 1980 as well as the Gold Medal at the third Puy-en-Velay International Salon in 1982. 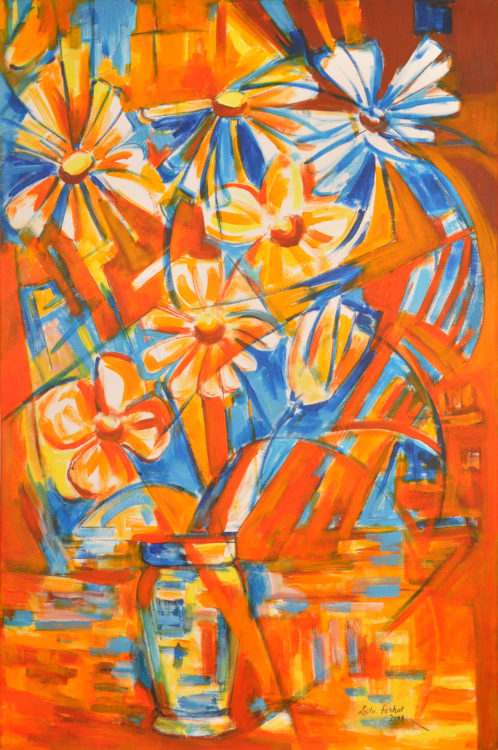 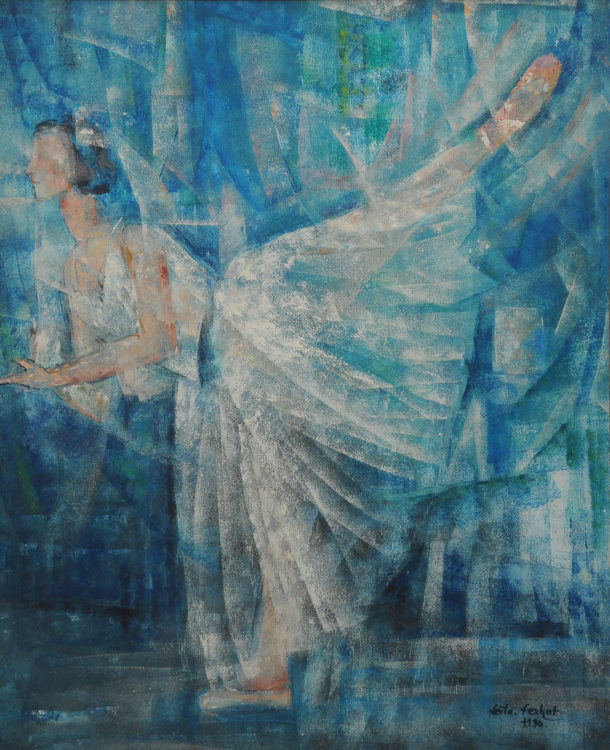 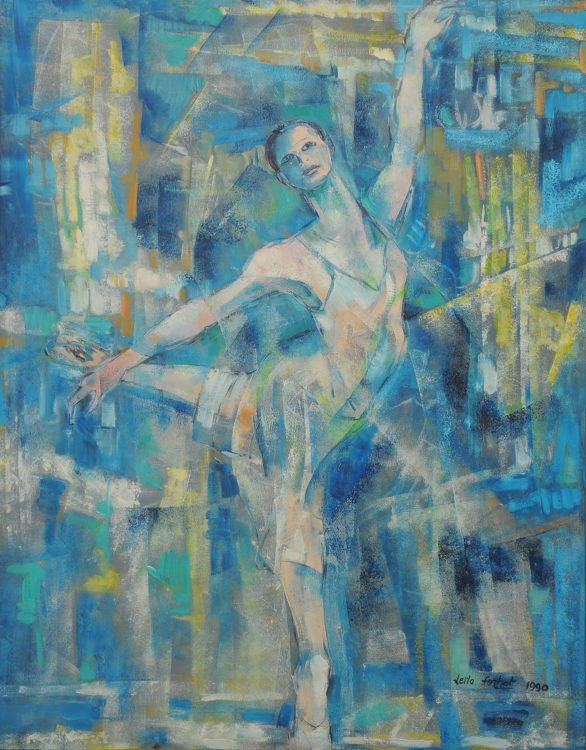 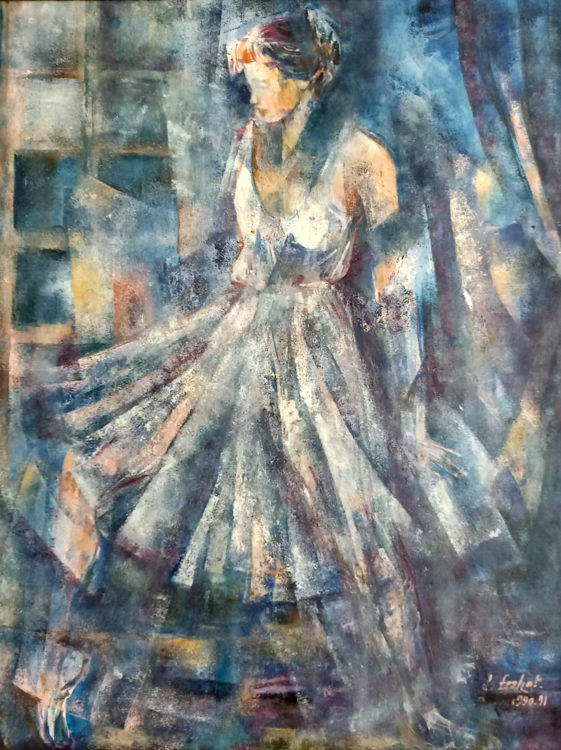 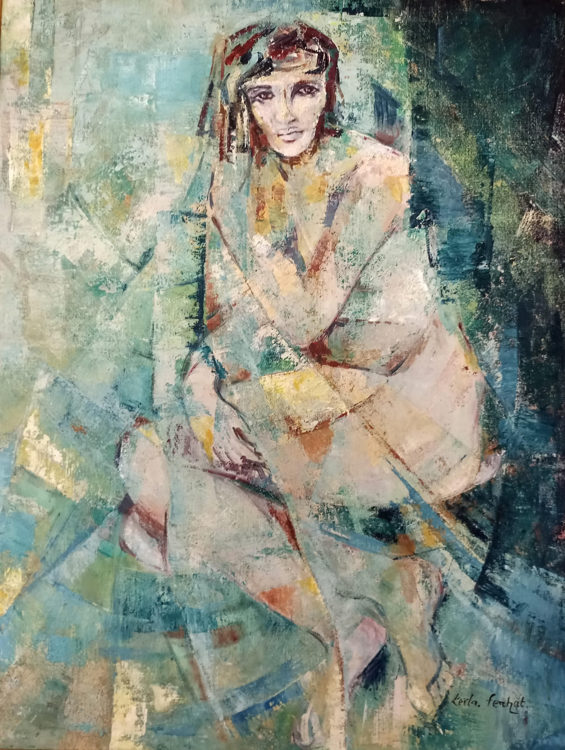 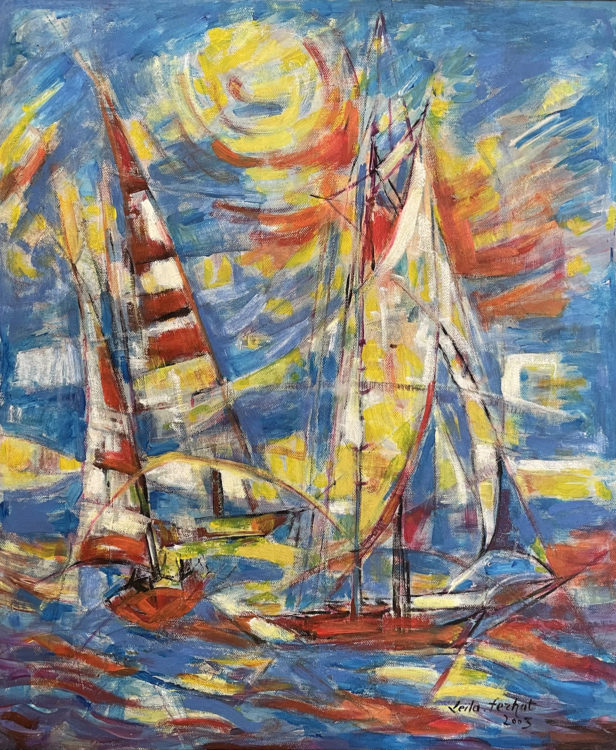 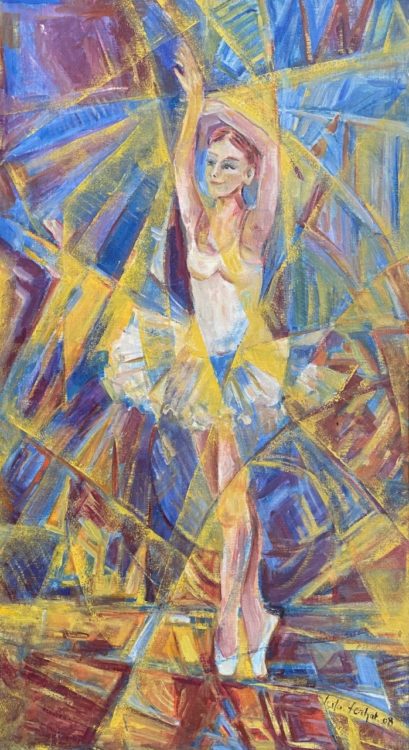 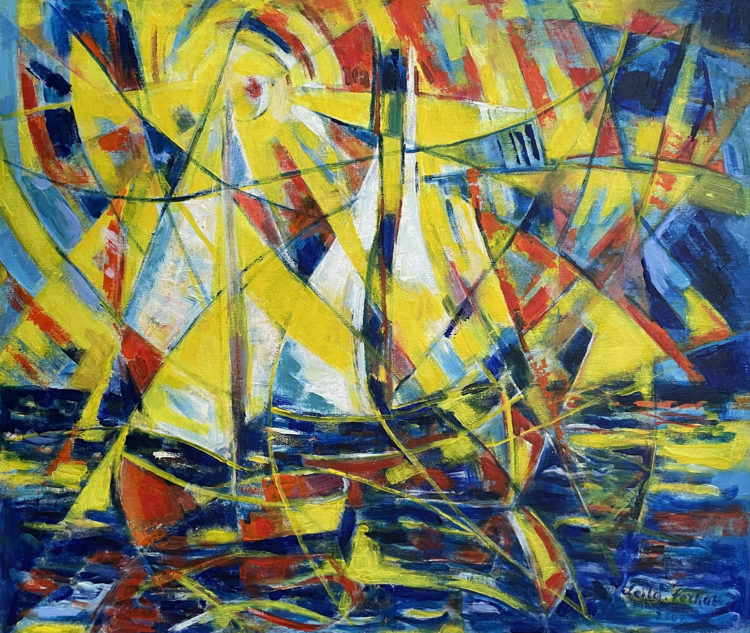 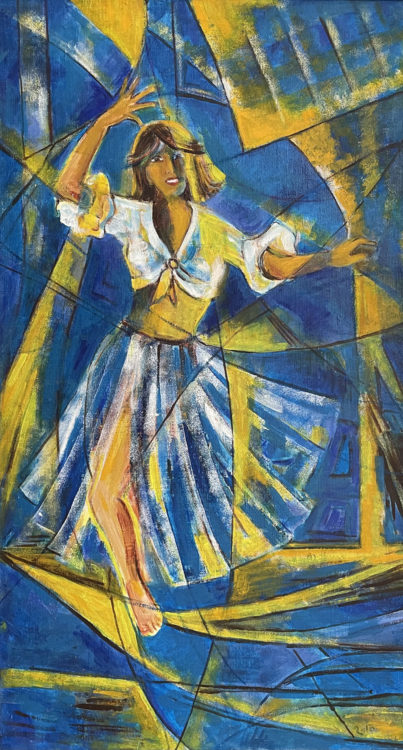 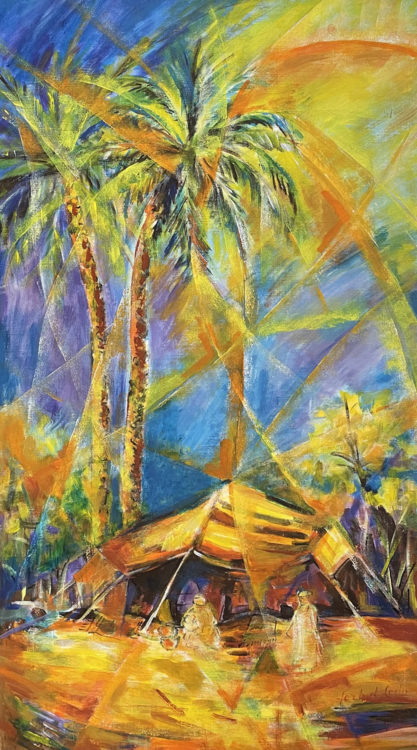 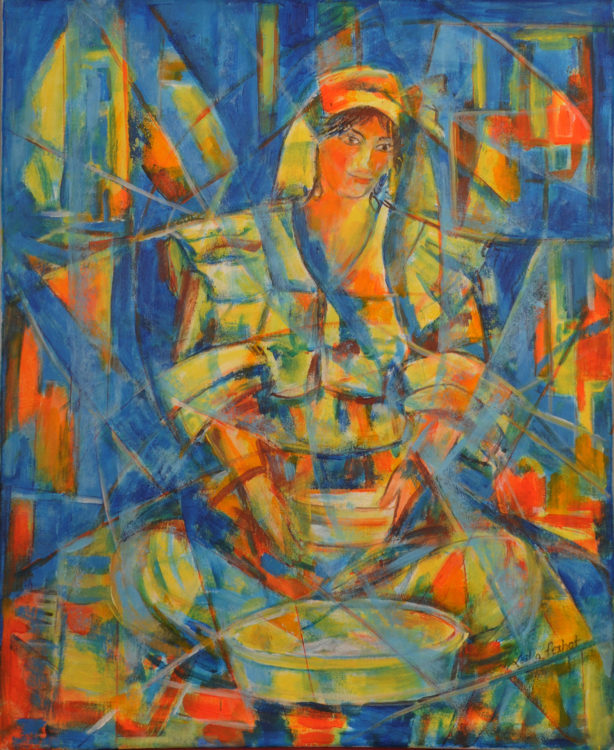 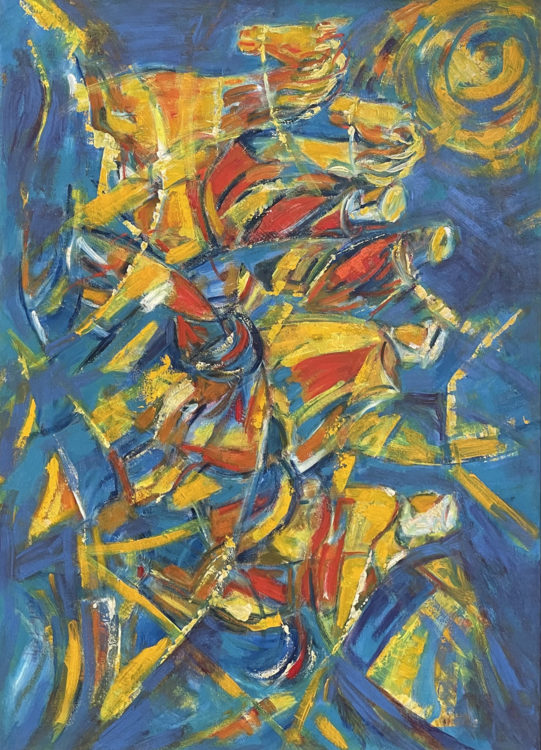 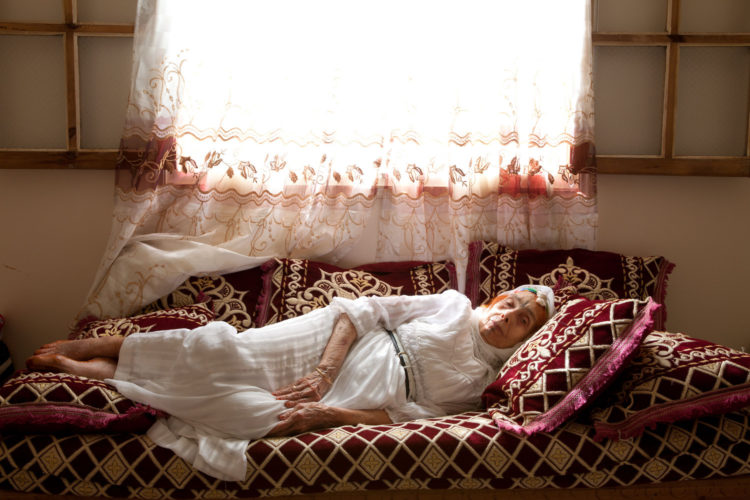 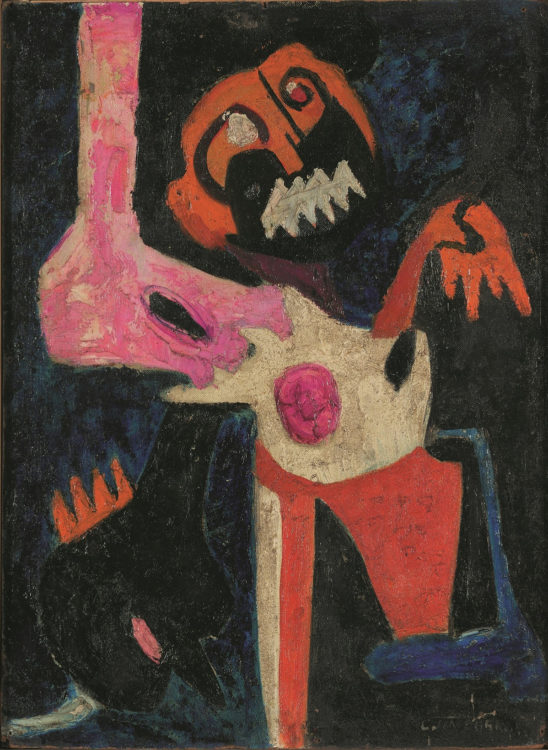 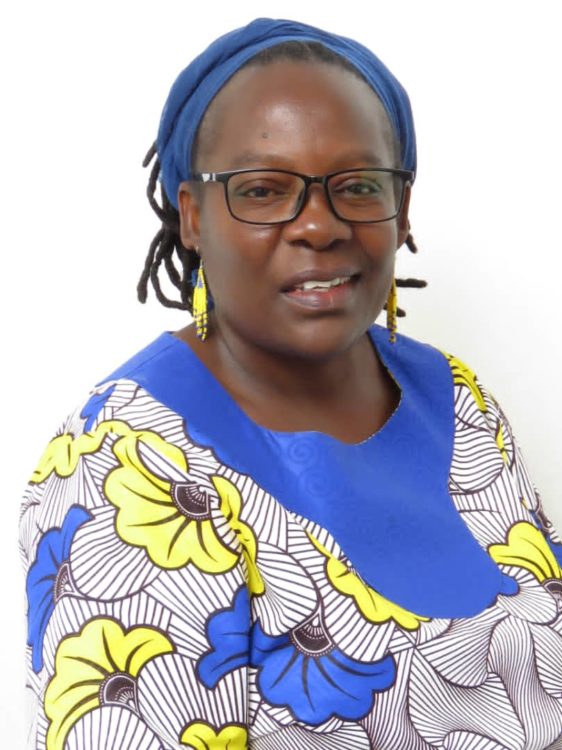