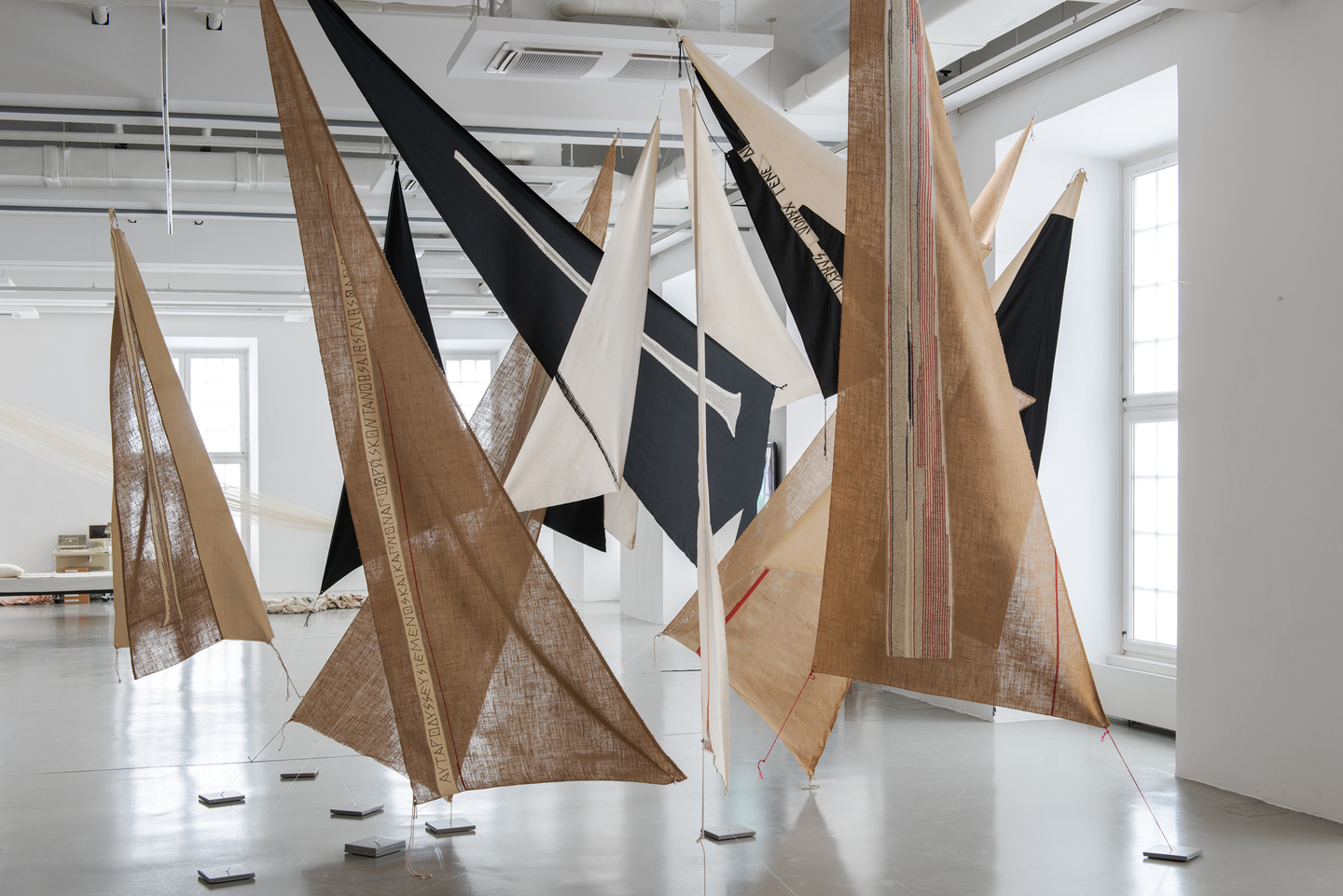 Emblematic of this 14th edition of documenta, Argentine artist Marta Minujín’s installation, The Parthenon of Books, transforms Kassel’s Friedrichsplatz into a strange acropolis dominated by a metallic structure covered in books that were censored in different parts of the world at different times. It is without a doubt one of the most grandiose links woven, during this whole edition, between Athens and Kassel.

For the first time documenta is taking place outside of Kassel, where it has been based since 1955; the choice of this duality with the capital of a crisis-stricken country, which is also one of the cradles of western civilisation, is a very political statement, confirmed by the mission assigned to Adam Szymczyk and the title he gave to this event: Learning from Athens. In Kassel there’s a very demanding selection of artists from various backgrounds, who reflect the history of present States and the implications of the ethnic, religious, identity-based and social conflicts of the past decades, in which a major role is played by the migratory crisis which is shaking up the European Union. There’s very little playfulness and levity in this edition which favours documentaries over fiction and the voice of minorities over those of the sector’s stars. 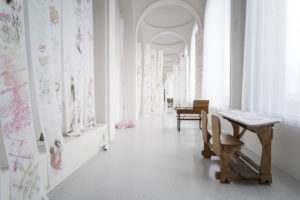 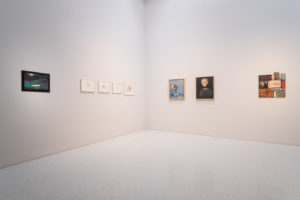 According to Paul B. Preciado, curator in charge of public programs, asking how many women are represented at documenta, “is no longer epistemologically valid today1”. He considers that it is “no longer possible to continue drawing on [the same] parameters” as before and that “it’s necessary to think about the critical processes that bring bodies together in the same way, with no distinction of nationality, gender or field of activity2”. This desire to be part of a new paradigm, which corresponds to Preciado’s positions as an activist, constitutes an exciting and revolutionary concept, which doesn’t stop statistics from having their say. The percentage of women artists at documenta isn’t necessarily following, as one could imagine, a slow but regular progression towards parity. Since the Harald Szeemann edition in 1972, which was heralded as a major event for contemporary art but disparaged because only 10% of the artists were women, the proportion has increased progressively, reaching 47% at Roger M. Buergel documenta 12 in 2007. Since then numbers are decreasing: at the Carolyn Christov-Bakargiev edition, in 2012, women represented less than 40% of the artists on show3 ; this year, 61 of the 199 artists exhibiting in Kassel are women, that’s to say 30.6%4. 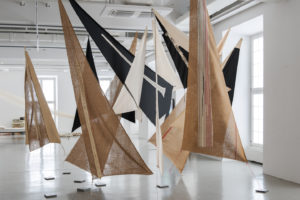 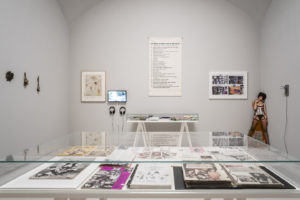 Regardless of the participants’ gender, this 14th edition leaves very little room for the younger generations: there are a number of artists active in the 20th century, often those with atypical backgrounds, on the outer fringe of the traditional art world and great creative centres; they are documented in the exhibition as much by their works as by their archives. This gives us an opportunity to discover some excellent women artists. The Fridericianum hosts part of the collection of the Athens National Museum of Contemporary Art (EMST): the Cycladic Books produced in New York at the end of the 1950s by Chryssa are in close proximity with a delightful sails installation, echoing Homeric myths, by Bia Davou and Janine Antoni’s weaving loom. At the documenta Halle, there are archive photos of dancer and choreographer, Anna Halprin, which are also on show this year at the Biennale di Venezia. They cover the creation of her dance deck in California in 1953–1954, which was a platform for the development of postmodern dance, as well as several of her performances and actions within the community. 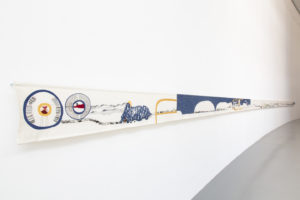 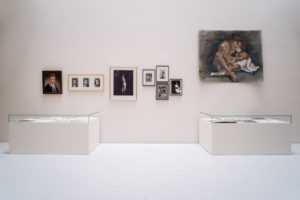 The majestic “quipu” produced by Cecilia Vicuña for the exhibition, which conjures up anatomical visions whilst reminding us of the mythological thread of Ariadne, is contrasting through its verticality with the work by Sámi artist, Britta Marakatt-Labba. Over more than 10 metres in length, this embroidery tells the story and cosmology of this people indigenous to the Arctic, which for several decades has been fighting the Norwegian public authorities for the ownership of its land and recognition of its culture. Máret Ánne Sara presents a body of works at the Neue Neue Galerie that have strong visual impact and decry the reforms that endanger the community’s reindeer husbandry.

The Neue Galerie comprises successive rooms dedicated to several women artists. One of them focuses on the careers of Annie Sprinkle and Beth Stephens, American activists who advocate for the rights of sex workers and those who perform terrestrial and cosmic love. In a well-lit, immaculately white corridor, Pélagie Gbaguidi presents an aerial installation, where children’s drawings are side by side with photographs taken during apartheid. She questions the role of education in the handing down of history. One of the most moving moments is surely when you enter the room that brings together a selection of archives and works by Lorenza Böttner, transgender dancer and artist, who had both arms amputated, and who explores the mise en scène, metamorphosis and eroticisation of her body through public actions, along with photographs and tableaux and the Tumeurs et Souvenirs series of resin sculptures produced by Alina Szapocznikow during the last years of her life, between 1970 and 1973: the result is a very beautiful rapprochement of these severely tested bodies, these two extraordinary destinies.

documenta participates in what is an ongoing trend in most of the biennales and exhibitions of these past years: the increasing inclusion of older women artists, at the end of their careers or as a posthumous tribute. These personalities are often “rediscovered” and the art world is starting to give them the importance they deserve and to integrate them into the histories of art that had been written without them up until now. This historiographical process, although bringing justice to numerous women artists, also works, in Kassel, to the detriment of young women artists whose more experimental practices are less well represented. 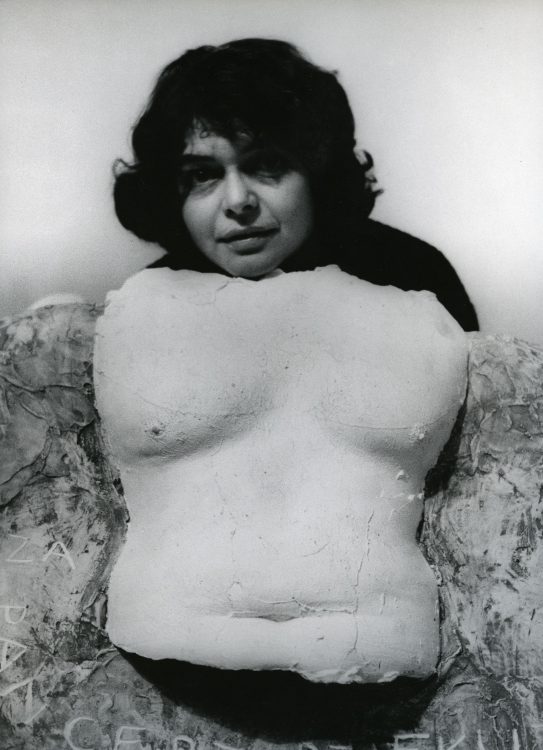 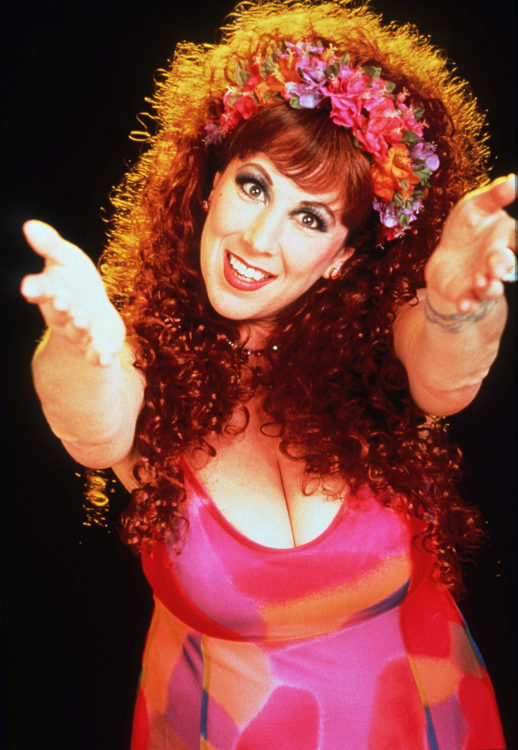 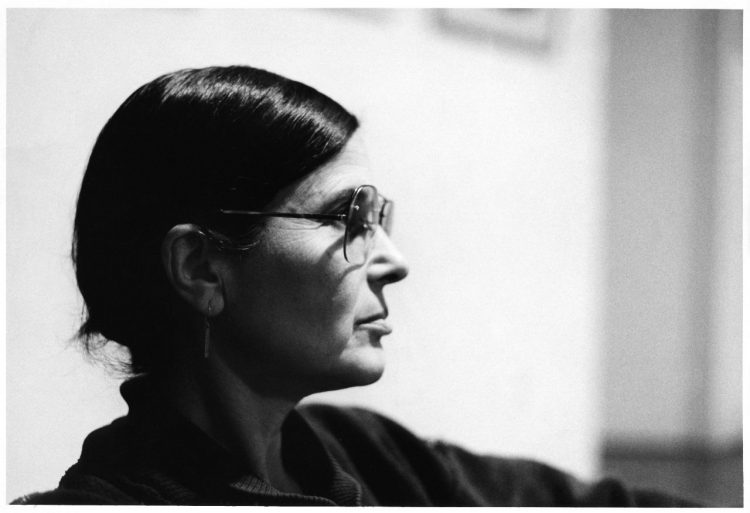